Battle 5 was fought over the weekend. The more I play, the more that setup finishes more quickly, and I remember the combat factors a lot more now. Less referring to the sheet and rules. However, each game finds me asking questions and I have a question from this week's battle below. But first, let's get to the action!

I generated both armies randomly. Both armies would consist of mostly militia and a few regular forces.


I thought about substituting fantasy elements (like Aerials, Magicians, Cleric, etc), but a toss of the dice said that wasn't happening. 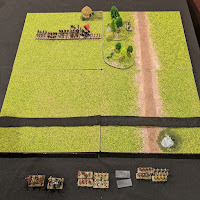 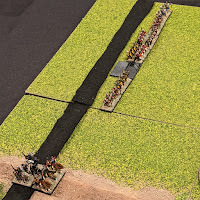 I'm painting those Saxons as fast as I can to complete my Human warband elements. Hopefully they'll be done for next week's game! I don't like empty stands!

The Orc Warchief, Ib'Nuzgran, lines up his troops as a solid bunch.  He details a warband to remain behind in case the sneaky humans try to send a detachment down the road to sack their stronghold! The human commander, Major Nesbin, sees an opportunity and details his Knights to head down the road and see what trouble they can cause. 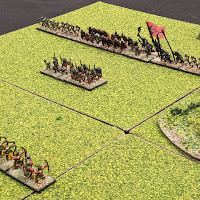 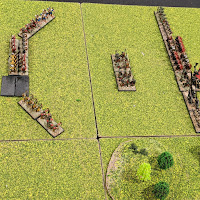 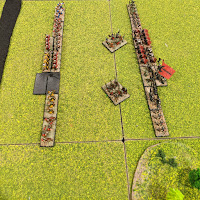 "Goblins to the front!" Ib'Nuzgran roars! The goblins rush ahead of the whip cracks from the orc sergeants, eager to taste human blood! Nesbin, seeing an opportunity to rain missile fire on the hordes, has his Shooters fold inwards as the goblins approach. The treacherous goblins then turn towards the wings, and Nesbin regretfully moves them back to keep the line intact.

Behind the goblins, the Bestials move forwards towards the approaching Human army. 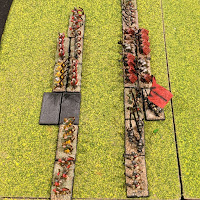 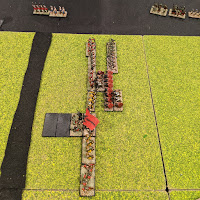 The Human Shooters do their job, launching a hail of arrows on the exposed hordes. Their courage melts like snow in the sun and the goblins run away, ignoring the curses of the Orc sergeants. The lines draw close and then rush to attack! The Orc Warband drives through the Human lines, pushing their opponents back and pursuing with bloodlust! 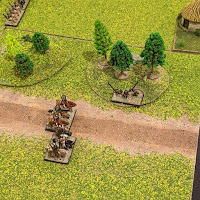 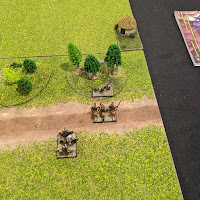 Meanwhile, the Knights head down the road to see if they can sack the Orc stronghold. The warband left behind to guard it takes up a position in the woods near the road. The Knights are reluctant to take their hoses into the woods, so one element attempts to distract the Orcs while the other group of Knights attempts to swing around. Unfortunately, being so far away from their commander, it is hard to keep their attack organized! The Knight's attack falters as they delay in how to best approach the stronghold. (The distance is greater than 600p to their commander and the Kn are behind an impassable hill with woods - it requires 2 PIPs to move each element, instead of 1. With the battle focus on the line, as you'll see below, this is as far as the Kn got. If only the humans had a couple of better PIP rolls...) 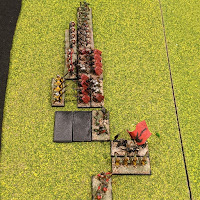 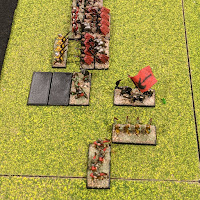 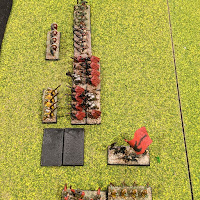 The battle's momentum swings towards the Bestials as the Human attackers are pushed back or destroyed! However, the impetuous Orc Warchief breaks off from supporting his warband to attack the nearby Human Shooters. Recoiling from the Human's counterattack, the Orc Warlord finds himself behind the other Orc Warband, out of position should the Warband be forced to recoil! Lucky for Orcs, the warband fights on.

It turns grim for the humans. Only a Blade, the Majorand his command of Spears, and two Warbands remain of the line of Human attackers! The Bestials line is mostly intact and howling for human blood! 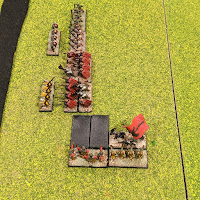 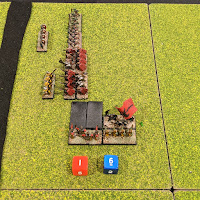 Nesmith sees an opportunity, however, and orders a desperate charge! The warbands and shooters surround the Orc Warchief and press the attack. The Warchief falls! The Bestials, disorganized and demoralized, retreat from the battle and their encampment. (6v1 in favor of the humans almost always guarantees a victory, as it did in this case. The odds were good for the humans for this bound, but had it not gone well, the Orcs were looking well on the way to victory.)

Humans win versus Bestials (Orcs/Goblins) (8 - 10G)
The Orc General didn't have many options when his surrounding elements were defeated, leaving him exposed. It was a close battle and with the Human line as wrecked as it was, there were going to be a lot of overlap situations when the lines closed again.

So my question came about with regards to when one element moves into contact with an enemy. For those of you who don't play HOTT/DBA (Hordes of the Things game is derived from the historical wargame De Bellus Antiquitatus), how elements contact each other and then "conform" (line up so that the elements are square with each other) is a whole set of precise rules - written in what is known as "Barkerese"! For comparison, the language (and organization) of 1st edition Advanced Dungeons & Dragons is similar to DBA/HOTT.

My question came to who had to conform to whom, when a group contacts a group, and if supporting elements (elements in the 2nd rank that can add to the combat resolution of the elements in the front rank) also conformed. I ruled at the time in one way, but after a quick (and slightly embarrassing) newbie question/discussion posted to the HOTT Facebook group, I reread the rules and now I understand - when a group contacts a group, the conforming applies to the entire group, including supporting elements.

My shorthand for remember this is: Moving group conforms to standing group, single elements conform, otherwise, check the rules! It works for me...

The other thing I (re)learned is that when moving through Bad Going, you move a group as a single column, or if you want to keep a line, those elements in Bad Going move as individual elements. It didn't come up this game, but has happened in previous games and I had forgotten that.

That's what I'm really enjoying, is this relearning and learning of little bits and elements. It feels just like AD&D/OD&D in that regards, and that just makes me happy.

On to Battle #6 next week!
Labels: Chronicles of Etinerra campaign HOTT HOTT52 wargames