I'm creating a game for GaryCon XII/2020 called "Rescue of Hommlet." I've never really played in the Greyhawk setting before, so this is a new world for me. These posts will be about my game prep and what I discover!

When I make a game for GaryCon, I am very mindful of my audience! GaryCon is something special - everyone is there to play old school D&D and pay homage to our roots. That means that I like to make my games something special, cranking the spectacle to 11 as much as I can.

I also know that Hommlet, the Moathouse and Temple of Elemental Evil are important and extremely well-known elements in Greyhawk and in D&D lore. 'The Battle of the Moathouse' game is one that I've read about a number of times in learning Chainmail. So I want this to look right and be fun... without putting in a lot of time and money - going back to basics as it were, just like gamers from the 60s and 70s.

I have some inspiration on the Moathouse itself, from having played 'The Battle of the Moathouse' game hosted by Paul Stormberg at GaryCon X. If you have never seen his model of the Moathouse, you can check it out in a video I made at GCX...


... or from a set of photos taken by Allan Grohe/grodog on Facebook here.

I had a big decision to make right away, how was I going to construct this icon of D&D lore? I wanted to do something that would plausibly be similar to what was constructed in the 60s/70s. I also wanted to live up to how cool Paul's model is. At the same time, I don't have unlimited time and budget.

Hirst Arts blocks were my first thought, but I don't have the mold for a 4" round turret and I knew this would be a lot of work. Then, YouTube gave me an answer! Cue Scotty of TheDMsCraft with a video on creating ruins out of cardboard!

This was perfect! I could whip this thing together in a week or two, make it look good, but not have to worry about breaking the bank. Plus, if this gives me the ability to learn now to do take this approach for other terrain for my D&D and wargames, all the better!

So, here is a bit of a build log. It's a work in progress, but I think you'll agree that the progress is looking very good!

I have some materials here, and the blueprints from the module T1 - Village of Hommlet. That is my bible for what the Moathouse should look like in the module's time frame. 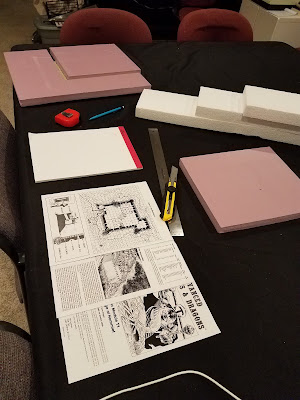 Making the front tower turret out of cardboard was my first challenge. Luckily, I save odd, weird things to use for terrain. I had this nice Pringles can which was close enough to the size I need. I carefully wrapped cardboard around the can (cut down to about 3" tall), hot-glued it and it turned out nice. Before I glued on the cardboard, I had traced the top roof on another piece of cardboard. Cut it out and glued it against the Pringles can top rim. 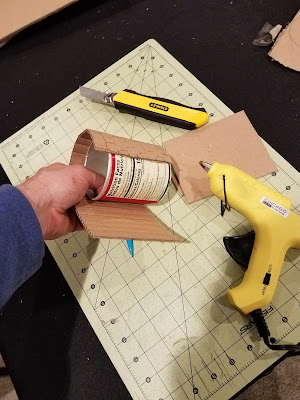 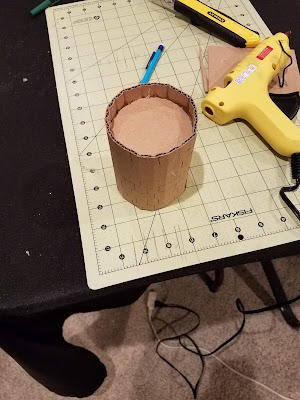 I cut out the crenellation at the top of the tower, then cut out the battle damage to the tower. I based it on the module cover picture from T1. I think it turned out great! 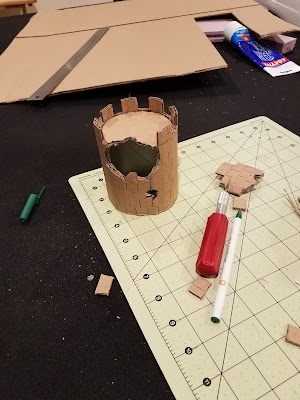 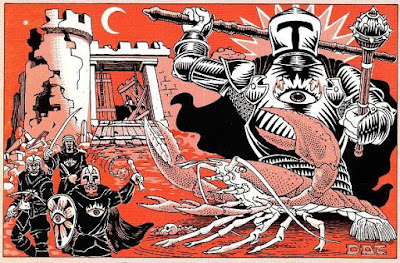 Based on the side view from T1, I estimated that raising it an inch, then making the structure walls about 1 1/4 inches tall would work well enough. I figured that the outer walls should be about two inches tall, with the parapet 1/2" tall and the rampart base will be just below that.

I initially traced out the base of the house structure, goofed up the dimensions, and had to trip the upper right square area a bit. Once I had that all figured out, I started gluing the outer walls to the structure, at least the walls that were completely held up by the base.

I used a toilet paper roll for the smaller turret on the upper left. I created steps that were more appropriate to hold miniatures and glued them in. They are held secure by push-pins that fit into the stairs and hold everything together with a tiny dab of glue over pin-head and cardboard. 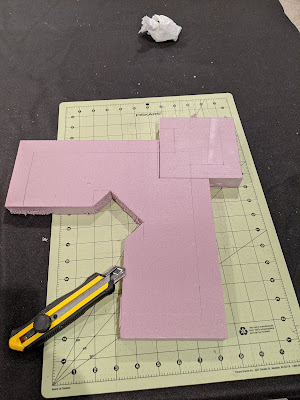 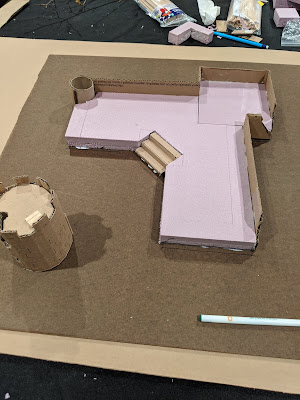 I then glued the structure's base to a 2 foot by 2 foot particle board 1/8 of an inch thick. I then glued the remaining walls that were going to be connected to both structure and to the base for stability. I glued on the main tower and made sure everything was connected.

In the T1 module, the moathouse has damage it suffered during the Battle of the Moathouse a decade earlier. So I carved that out of the walls. 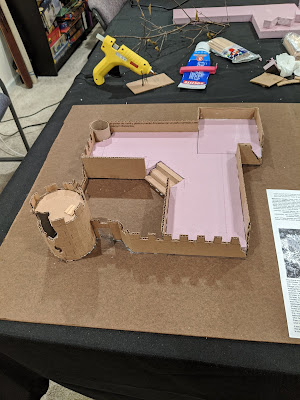 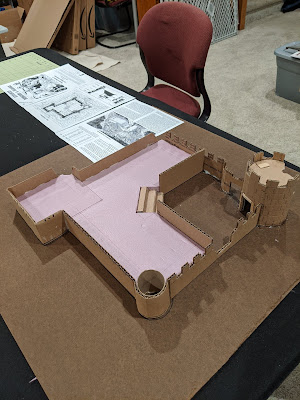 I think the results are fantastic so far! As Allan/grodog said to me "You can really see that it's the Moathouse!"

That's what I'm hoping for!

So that's my progress so far. I'll get to working more on the game itself. I'm still deciding on the final force composition for Act 1, which will take place here at the Moathouse. I want to stick close to what T1 lays out, but I think the forces of Woe might be outnumbered. Perhaps a playtest!

I've also had a nice conversation with Jason Vey and Aldaron, the two gents responsible for the "Compleat Chainmail" rules that I'll be using with my OD&D rules for this game. They've clarified how they used the rules. I think both Acts/battles will use mass combat resolution rules, as well as some mixed figures/scales - both 1:1 and 1:20. I'm really looking forward to the first playtest!
Labels: DIY GaryCon Rescue of Hommlet