It's been reported on Facebook and in Tenkar's blog that Swords & Wizardry is receiving a bit of facelift/reboot. There will be a facelift to the book itself, a box set is planned and releasing the book as a digest set (to mimic the original three "little brown books")

The news that caught my attention is Frog God Games, the publisher of S&W, is consolidating into just one "Swords & Wizardry" book to rule them all, no longer will there be a "Core" and "Complete" and "White Box".

That last bit leaves me very sad. White Box Swords & Wizardry came out about the same time I (re)discovered 1970s D&D and it has appealed to me for one very simple reason - it's a wonderful way to play the game as it was played in 1974, and it serves as an amazing toolkit to construct my own game much as MAR Barker built Empire of Petal Throne, how Gygax built Greyhawk and Arneson built Blackmoor, where the setting and rules were linked and seamless in such a neat way and yet different from "stock" D&D.

(See below for the history of Swords & Wizardry and White Box) 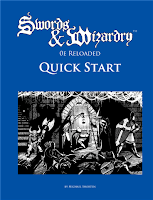 Back in 2009, with the 2nd print of Swords & Wizardry just released, I created a free Quick Starter module. It included char gen, basic player information (for 1st level characters), beginner (to OSR) DM information and a whole adventure called "The Dungeon of Akban."

Although White Box is not going to be supported by FGG anymore, that doesn't mean it's going away! White Box has been around for awhile, freely available, and it will continue to be so. It is a fantastic toolkit to play D&D with.

I'm rewriting the Quick Start to use White Box rules (instead of 2nd printing S&W) - that gives it a lifeline to stay relevant and playable for a long time to come. It's my love letter back to White Box and a way, I guess, to make sure that I do right by the game system that did right by me.

If you're curious, here's a link to the older version - soon to be updated! It's totally free, and if you're good with OSR systems, I think it would be very easy to convert to your game of choice. It was really made for someone very new to OSR, so it might be a bit hand-holdy, but that was the point!


The History of Swords & Wizardry

A bit of history, if you'll indulge me for a moment. When Wizards of the Coast released the third edition to Dungeons & Dragons, they created the Open Game License (OGL) which let third party publishers create and publish their own works based on the 'skeleton' of the D&D game. What this did was to allow creative people to recreate D&D in many different ways, including the way that the original rules worked!

Swords & Wizardry was developed and published by Matt Finch of Mythmere games in 2008. This game was meant to emulate the original 1974 D&D game, with some of the concepts from the supplements to OD&D, along with some mechanical tweaks that Matt wanted to implement - the two that stick out to me is the use of one saving throw value, and ascending armor class (going from 10 to 20, versus going from 10 to -1).

This was followed very quickly by a version of S&W authored by Marv Breig (aka Finarvyn around the D&D/OSR online community) that stripped the game to almost exactly the types of rules and framework that the original three books of 1974 D&D contained. It was called "White Box" after the white boxes that OD&D were sold in during the 70s.

Swords & Wizardry continued to gain in popularity over 2009 and 2010. It won an ENnie Award in 2009 for 2nd place as "Best Free Product" which I believe marked the first time an "OSR" product gained that sort of recognition. In August of 2010, Matt Finch entered into business with Frog God Games to publish S&W. It was split into a "Core" version (which was basic S&W) and a "Complete" version (which had a lot of extras and add-ons for classes and other options). Over the past 9 years, there've been new covers and lots of adventures published.

Where the "regular" Swords & Wizardry would become a huge success (in relative terms for the OSR/Old School publishing world), White Box retained a base of underground credit and buzz. White Box had a bit of a renaissance as well, being released as a boxed set by Brave Halfling Publishing in 2010. Since then, a few adventures have been published for that game specifically, but it's remained firmly in the world of hobbyists and DIY'ers.
Labels: Swords & Wizardry