Campaign: It was not always so, the Elders say, but when the GodKing descended from his holy pedestal, his landing created The Hole and his wrath created The Wall from which none can venture beyond the mountains. The GodKing created the Holy City of Jakuni beyond the Wall, by which he could watch over the edge-dwellers and send his recruiters to decide who could join the GodKing, and who must remain in punishment. There is always rebellion, always grumbling, always conflicts with the others trapped in punishment, but nobody has ever broken beyond the wall, or found the bottom of The Hole.

Homebase (Hex 0) (01.02): Quipoenas - Lord Rison, who rules over the village of "The Punished" keeps the farmlands safe and one of the few open to trade with an iron-fist, attack-then-ask-questions approach; his sheriffs and deputies numerous and watchful. The populace lives in fear of the monsters in the woods and the Recruiters who come yearly from The Hole to select the redeemed to be taken, and never seen again. The rare adventurer who comes to town to seek entry into The Hole is permitted to stay without question, the locals seeking to profit from their preparations, while keeping secret that the foolhardy to enter rarely return. 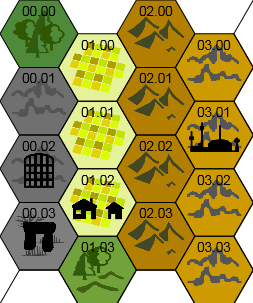 Location 1 (00.02): The Hole - A vast crater that takes 12 days to walk around its edge; its insides are a maze of rubble and ruin that leads to an enourmous pit that descends into neverending darkness. At this edge of the Hole, the residents of Quipoenas have constructed a gate to keep the foul creatures within The Hole and limit the curious from venturing within. The most recent adventuring party of twelve saw only one person come back to the gate, pleading and begging to be freed from "the things that ooze from the walls!"

Location 2 (00.03): The Eight Stones -  Dark tales tell that during the Time of the GodKing's rage, eight heroes died where now eight enigmatic, silent stones stand. The area is full of undead, and only the brave venture into the dark, dead lands. The stones are guarded by wights who fill the air with their howls of pain, rumored to be a song of the secret they guard that could challenge the GodKing.

Location 3 (03.01): Jakuni -  The decadent, decayed city of the GodKing exists as an ever-changing landscape, in tune and reflective of the mood and interests of the being that created it. The Recruiters and Guardians roam its walls and streets, ensuring that the Redeemed stay cowed and ready to be of use to the whims of the GodKing. The tunnels that lead between the city and The Hole are deep and guarded, but a lone Redeemed has managed to find the way there and back safely.