Campaign: When the High Lord Roderick obtained the Chalice of Lentagern from the clutches of Black Duke Torin, he sent it to the Cherrionite Order of the God of Knowledge at the Abbey of Calthway. Unknown to all, the Lord of Greater Demons sensed the immense power of the Chalice and coveted it for himself. In the ensuing battle for the Chalice with Ibranham, Grandmaster of the Order, a rift was opened to many dimensions, pulling combatants towards these lands and creating the Chaos Wars!

Homebase (Hex 0) (0001): Name - The lands of High Lord Roderick lie on the borders near the Elfin Kingdoms and Orclands and were once peaceful and prosperous. That changed once the rift opened and the Chaos Wars began, and many of the villages now lie in ruins, destroyed by the strange creatures and forces that have invaded. Roderick's castle still flies its banners defiantly and the town that it protects has become a hub for mercenaries, militias and adventurers seeking their fortunes in war. 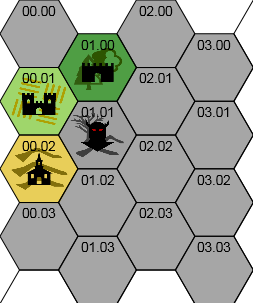 Location 1 (0002): Abbey of Calthway -  The Abbey of Calthway is home to the Grandmaster of the Cherrionite Order and formerly held many of the Order's highest priests and paladins. Once the rift was opened, the church was quickly overrun with strange creatures from many different dimensions, along with the vast hordes of the Lord of Greater Demons and the undead legions of the Liche King. The Chalice still lies in the crypts of the Abbey, waiting for the one who wins the Chaos War to claim it!

Location 2 (0100): Southern Gates - The forests of the Southern Gates hide the hills that form a natural valley in these lands; the three roads heading north from the valley lead to the Elfin Kingdoms, the southern route leads to the Orclands. Elfin Nobles and their house charges man the Southern Gates in yearly rotations, fighting against the Orcs that constantly try to raid northwards against their ancestral foes. The Chaos Wars has changed the nature of this battle considerably; where once the Elfin forces held the upper hands, the many demons and undead ravening through the woods has left the Elves on the back foot.

Location 3 (0101): Wasted Hills - Rocky, treacherous draws and clusters of dead trees on stony hilltops are the main feature of these northern reaches of the Orclands. Long a battlefield between Elves and Orcs, the fierce battles and magicks cast has taken their toll and left grim reminders of the blood shed here. It's only natural inhabitants are scavengers and hardy plants; newly arrived are the forces of Chaos from the rift that find the blasted wastes suitable to encamp in.


This campaign starter is based on the setting from the Ral Partha miniatures wargaming rules - Chaos Wars (aka Rules by Ral). First developed and published in the mid 80s, the rules and miniatures were revived in 2015 by Iron Wind Metals, who own the old Ral Partha master molds. I'm a demo team member for Ral Partha and it occurred to me that this setting would make a great Three Hex starter!

You can download the rules for free from here - and be sure to check out the awesome Ral Partha figures in the online store! Many old figures have been re-released and a new Kickstarter is rumored to be coming in later 2018.
Every week, I will be posting "Three Hexes" - simple campaign starters to show that you don't need to do a lot to have interesting settings for people to play in. Feel free to use these in your game, campaign or as ways to spur on your own creativity and imagination!


Chaos Wars and the names, locations, characters and items mentioned in this are Copyright © 2015 Iron Wind Metals. The content is used with their permission for non-commercial use.
Labels: Chaos Wars Three Hexes