Campaign: The discovery of the "skip fold" drive, based on a weird mash-up of quantum physics and a partial understanding of dark matter/dark energy has permitted humankind to begin exploring the stars in years, not multiple generations. What they found wasn't what the popular sci-fi or mythology told them was out there; rather humanity found that the nearby worlds are a huge cargo-cult, living and trading (called The Scrabble) on the scraps of technology discovered from races that lived and died long ago. Opportunity still exists, it just involves a lot more digging and scrabbling among ruins, thieving and fighting over scarce finds and struggling to understand what the Ancients knew and why nobody has reached their level of knowledge.

Homebase (Hex 0) (0101): Waystation - The first extraterrestrial contact made by humanity was discovering the enormous space platform of Waystation orbiting a dead Mars-like world. Originally built by the Ancients, it has become a marketplace where races come together to trade in the things they've discovered, to sell information and locations, as well as steal/loot from each other. The station itself has been well looted and scavenged and now is a hodge-podge of various alien technologies keeping it in working order... mostly. 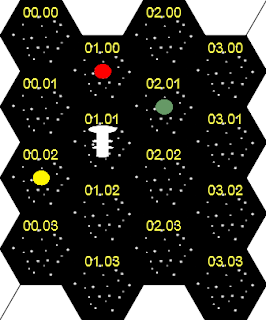 Location 1 (0002): Melvinon - This system is a dangerous mix of asteroids and dead ships. It's lone planet is a harsh, ammonia world, with strange machines that are doing something to the atmosphere, although it is hard to know if they are creating the environment or trying to repair it. The lure of many Ancient outposts buried in the asteroids draws many a scavenger to their doom, leaving behind tempting salvage.

Location 2 (0100): Lavesh - Lavesh hosts a fairly intact Ancient city full of still functioning automatons, left so because of the lizard and insect races living in xenophobic harmony on the planet! The city itself is a forbidden place by the Laveshians, zealously guarded as a shrine to their forebears. The enterprising adventurer might find great riches here, but first they must get through the extremely tight security zones in and around the site, and then be able to leave.

Location 3 (0201): Sol - Once humanity learned of the existence of the Ancients, more thorough explorations of the various planets and areas in the Solar System found artifacts on Mars and in Kuiper Belt. This, of course, guaranteed the arrival of scavenging aliens from nearby systems, eager to explore newly found territories that might be intact. The United Nations of Earth are worried, though, because there are signs that the pyramids of Egypt and Central America might house similar artifacts and Earth might be a new target of mass scavenging!