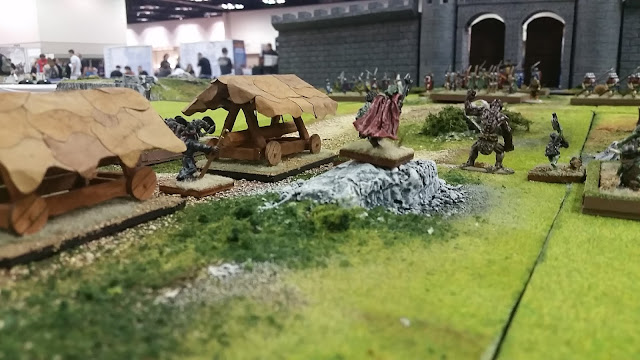 Several of my wargames within Etinerra have used the (free) Ral Partha Chaos Wars rule set. In the past, I've done this primarily at conventions and events as special games. Now, I've started doing more of these battles at home as solo games, especially now that a portion of my campaign involves the marauding Sea Elves.

Why does that matter? I don't have 15mm/DBA-HOTT based Sea Elf units, only 25mm Chaos Wars based figures. In fact, I have almost four complete armies for Chaos Wars in 25mm for my campaign world.

With that in mind, I needed to construct standard rosters for engagements, so I could quickly conduct battles with similar armies. I borrowed the format/approach used by the Ral Partha campaign books and created my own rosters for small battles (using only a few figures, ~ 100 points) and normal sized battles (~ 200 points with a few additional figures). If you're curious what that looks like, see the link below.

I can see light at the end of the tunnel on finishing my Etinerra Chaos Wars armies! I will have enough figures soon to host roughly 200 point armies for all four major factions, and additional units to create close to 300 point armies. What lies next after that? I'll probably find additional ways to spend my money! After all, I do need a halfling unit, and I'm sure a unit of Black Brotherhood cavalry would look nice...