Campaign: In May 1940, the II Infantry Battalion, 337th Infantry Regiment of the Wehrmacht 18th Army., participated in the attack on the Netherlands, but the entire unit was "lost" somehow in the attack. After a strange night of fog and northern lights, the approximately 1,500 men found themselves in a bucolic, medieval setting, populated by people out of legend and mythical creatures! The sudden arrival of advanced technology has upset the peaceful setting and it appears that war may be at hand.

Homebase (Hex 0) (0001):  The Village of Hamlon is a relatively peaceful place, mainly a marketplace for travelers on the Great Road. It occasionally fends off raids from Goblintown, but townsfolk are still buzzing about the strange invaders from the Cursed Castle that have recently made their presence know. The local lord has put out a call for mercenaries and adventurers to form an irregular militia, while his urgent dispatch makes its way to the local governor. 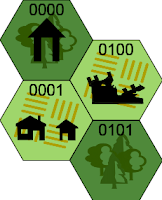 Location 1 (0000): Goblintown - A crazy patchwork of tree houses, crude structures and rope bridges form Goblintown, the city of the tree-dwelling goblins. Trade occurs infrequently between Hamlon and Goblintown at its borders where opportunistic goblins also look for travelers on the Great Road to waylay. A recent skirmish by a recon patrol of Wehrmacht and goblins have caused them to shift to a war footing, with a Goblin Chief being named to lead raids and retaliation.

Location 2 (0100): Cursed Castle - Oberstleutnant Sauer has taken over the ruined structure of an abandoned castle while he sends out his men on patrols to determine where he is and what has happened. The castle's crumbling walls are now bristling with machine guns, mortars and scared German soldiers. The bodies of several creatures dot the countryside, while clusters of patrols nervously search for supplies and answers.

Location 3 (0101): Dark Blood Forest - The tall dark trees of the forest form an almost impenetrable wall into a dimly lit, brooding interior. The trees themselves feed on creatures foolish enough to sit in place too long. There is a large blasted area nearest to the Cursed Castle with a wrecked armored vehicle - the only remnant of a squad that was destroyed by the vengeful woods.

Chgowiz's Notes: This campaign world is based on the scenario "Sturmgeschütz and Sorcery", an article from Strategic Review Vol 1, No. 5 - published by TSR and a predecessor to the Dragon magazine. This scenario recounted an Original Dungeons & Dragons battle between a company of Wehrmacht soldiers and evil chaos creatures from the lands of D&D. I often wondered what a campaign would be like if a much larger force had "crossed over..."

This campaign provides some great possibilities! What if the players want to be the Germans? What if part of the group wants to be the "Heroes" and half the Germans? You have some great avenues to explore.
Every week, I will be posting "Three Hexes" - simple campaign starters to show that you don't need to do a lot to have interesting settings for people to play in. Feel free to use these in your game, campaign or as ways to spur on your own creativity and imagination!