Campaign: The world of Tantalla is a sea of constantly shifting, blowing sand, sometimes exposing life-giving water, unforgiving rocky terrain or once-hidden secrets. Life is a struggle against nature - the terrain that forces cities to constantly move, the creatures that mercilessly hunt for survival, the hot sun and wind that defeats all who stand against it. Opportunity awaits those who can survive against great odds, seizing the moments that riches and resources are seen, soon to be lost to the sands.

Homebase (Hex 0) (0101): Fenjalli's Oasis sprang up a generation ago, rich with water, palm and date trees and even a rare methellen bush - bearer of the healing berries sought after by all. Three great tribes set their differences aside, planted tents next to each other and grew rich on from the great water caravans that arrived. The unforgiving sands have begun their relentless reclamation of the oasis, causing a great search to begin for where a new home may be found. 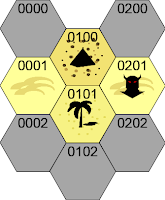 0001: The vast dunes of Duskward Desert are constantly on the move, making it difficult to cross the terrain. Hunters scour the dunes for rare creatures to sell at market, risking becoming prey to the wily ash goblins. Scavengers and the desperate make their homes in the sands, seeking nuggets of silver and gems before they are lost in the sands.

0100: An enigmatic black ziggurat has been seen here by scouts, either exposed by the winds, or suddenly appearing in the sands. Strangely robed figures have been seen on its steps, but they vanish upon approach. It is whispered that the Death Cults have summoned their god here to claim these lands for a necropolis.

0201: The strange insectoid Rintiks have established a colony here. Their raids on Fenjalli's Oasis have become more numerous, leading the Chieftains to offer a bounty for Rintik heads as retaliation. It is said that the Rintiks hoard great wealth and magicks in the Queen's chamber, found as they dig their myriad tunnels in the sand.