A valiant PC death to protect the villagers of Maple from the marauding goblin attacks! The Strangers from another land realize that death in Sosaria is possible... and probably permanent. This really isn't a dream for them. 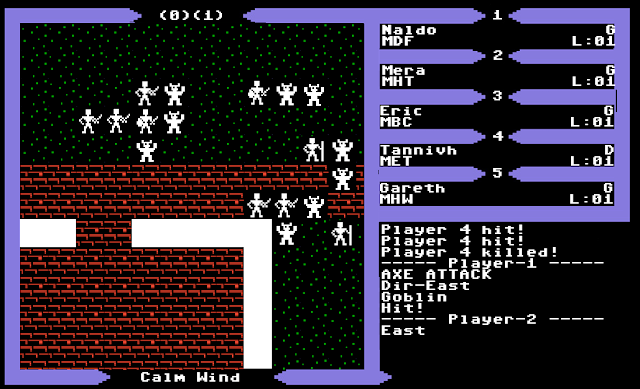 The party shrunk this week to four, as Hobbs pulled out. He didn't leave any instructions on how I should deal with his character, so a valiant death was found at the hands of the goblins who continued to press their attack from the previous session.

The session started with warnings from the farmer militia that more goblins were coming from the South! The thieves and mages, remembering how the goblins liked to stick to the woods, kept an eye on the treeline. Naldo ran forward to stand alongside the town's mayor, Helena. She apparently was also a strong fighter, judging from the sword and shield she was carrying. Or maybe Naldo was just wanting to be there to get some 'phat lewt' if she dropped.

The goblins blades were fell and dour. Helene was seriously wounded and Hobbs was cut nearly to his finish and he fled into town. Mela, the other thief, became this sessions Goblin-Killer(tm) with taking out two of them with high damage rolls! Soon enough, the goblins were killed, but so was a militia member.

More ominously, Hobbs was nowhere to be found - only splashes and smears of blood. The party starting working their way along the blood trail. Up ahead, they heard the sounds of fighting and saw the militia running to the east of the village - more goblins attacking!

As they ran around the buildings, a grisly sight befell them -- Hobbs lying still on the ground with a goblin standing above him, blade dripping with blood! Incensed, Eric the Bobbit started yelling Bronx curses and charged the goblins, as did Naldo and Gareth. Mera tried to revive Hobbs... but alas, it was too late. He was gone.

The goblins were slaughtered till one was left, and it beat a hasty retreat. The players sorrowfully gathered Hobbs body and joined the fleeing villagers and militia on their exodus to the town of Britannia, guarded by the Castle of Lord British. Once there, the party gave vague answers to questions about where they were from. 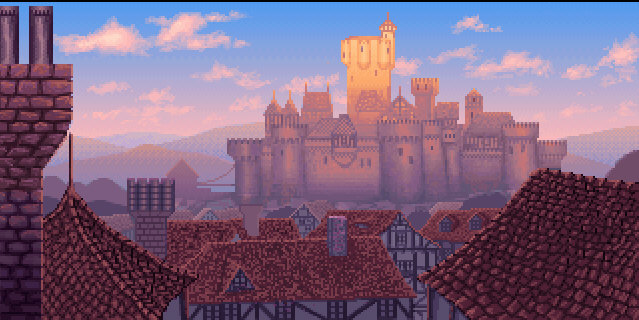 As morning dawned, several guards from the castle came to the group of refugees and demanded that the "Strangers from Oregon Up North" accompany them! It seems that Lord British wishes to speak to them.

And so we'll see how it goes next Wednesday when they meet this much beloved King.

I do have openings for two more players! We play on Roll20 (using Discord for audio) every Wednesday evening from 6:30pm to 8:00pm (Central). The four players said they like the short game length and are enjoying a different sort of experience -- playing as "real people" waking up in a Strange Land -- think of the D&D Cartoon or the "Guardians of the Flame" book series, for example.
Labels: D&D Sosaria campaign