Campaign: Life has always been about the water, surviving its capriciousness, reaping its bounty, running from its dangers. Seas cover almost all of the surface of this world; although small islands do exist here and there, the vast majority of the population will never see these legendary dry lands. In such a strange and difficult world, adventure calls to those brave enough to leave their homes and strike out over the waves towards the unknown.

Homebase (Hex 0) (0100):  Asmelion is one of the five floating cities that make up the Octimas Seas Kingdom. Constructed from great vessels of ages long gone, the city is currently at anchor, waiting for the Great King to decide where it may move next. Above-surface and below-surface areas of the city are divided into quarters based on caste and religion. 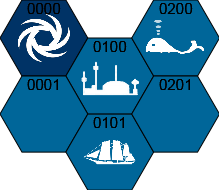 0000: The Wailing Whirlpool spins its endless slow dance, trapping ships and smaller floating towns that drift into its arms. Those brave enough to salvage abandoned vessels can find great riches, but run the risk of becoming trapped, or killed by other salvagers. The mer-folk regard the whirlpool as a sacred natural place and are suspicious of any who approach.

0101: The tangled wrecks of the fleets of Kolignar, the Great Pirate float here, ten years since his defeat by the combined navies of Octimas. Scavengers and small-time pirates scour the wrecks for hidden treasure and weapons. It is whispered that some of Kolignar's goblins survived and are secretly rebuilding ships to begin raiding Asmelion's edges.

0200:  A number of turtle dragons, kraken and great whales are fighting over the rich schools of bait fish that have migrated here. The bodies provide a great bounty for those brave enough to venture into the bloody waters. Other species are also scavenging for food and materials among the dead.

I've purposefully left a lot of detail out because these are supposed to spur on your imagination! The scale is what I would use in my own world, but if something else suits you better, then go for it. I measure my hexes by a day's travel, normally. For specific travel speeds, I use the 1st edition DMG as a guideline.  I may have the features moved about on the hexes for clarity, if they don't suit you, move them!