Campaign: Humanity has moved to the Megasprawls in the 250 years since the Nuke-Out. Life is a tough challenge in the high-tech protected areas, the industrial and military zones. It's a nightmare in the Radzones - places where the mutians, monsters and mysteries live.

Homebase (Hex 0) (0101): The Northwest Habzone of Megasprawl Eight is a mix of the hightek world and the lowerclasses living near the IndustrySektors. Taxes, Security forces and robots keep the Pures separated from the blue collar lowers who have to travel close to the Radzone to work in the factories. Creds and transactions can still buy just about anything if you know the right dealers and 'Net shops to visit. 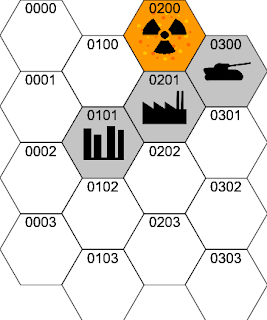 Three Hexes
(Hex scale is a Megasprawl block - which measures 15 miles. See below)

IndustrySektor (0201): Several factories here churn out cheap slides - the devices that connect people to the 'Net - and the colorful tchotchke that are used to customize them. The usual armament and military related warehouses can be found here. There may also be an R&D center for UltraViolet and their AI products, but nobody seems to know - or lives long enough to tell.

Fort Smithson (0300): The original target for the missile that landed in Radzone D2, Fort Smithson has stayed an outpost of The Army, which is used by FedGovtInc to enforce the few authorities left to the Goverment. Guarded by modern and antique robots, both types form a unique and challenging obstacle to those who want to try and steal the heavy weapons that can counter the Industrial and hightek security forces. They launch regular raids into Radzone D2 to keep the mutians at bay.

Radzone Delta Two (0201): A blasted, irradiated section of the city that bore the brunt of a nuclear blast meant for Forth Smithson. Mutians make their home in a ring around the highest danger zone, launching attacks which are quickly repelled by the security forces and Army. Strange technologies can be found here, although it's not certain if these come from the mutians or something else - something unknown.