We had another session of the online Ultima RPG on Wednesday, and it saw some combat with the little bobbit (halfling) turning into a stone cold goblin killer. The heroes also found out that the world they've found themselves is wracked with war.

Our cast of brave heroes, taken from the modern world and thrown into a crazy world straight out of a fantasy movie:

Having agreed to travel together, the heroes walked with Farmer Lyle to the village of Maple. They found out that some of the visions they'd seen in their dreams were from the "Great War" that happened twenty years ago. The five heroes that they'd seen in their vision seem to be the Kingly dudes who aren't talking to each other anymore. And now war has returned.

Speaking of war, as the party got close to Maple, they saw fields smoking. Seems that goblins had torched the fields, causing the village to do a "Screw this, we're outta here. Headin' to Britannia!" and the few town militia were nervously eyeing the borders for raids.

The players agreed to help with the rear guard action, allowing the villagers to flee safely, in exchange for gearing up. The blacksmith shared some weapons and the players got busy with it.

Goblins attacked from the north - Eric the Bobbit cleric smacked some heads with his mace, taking them down! Tannivh tried to do a backstab, which didn't go so well, and he beat feet to get out of the way. 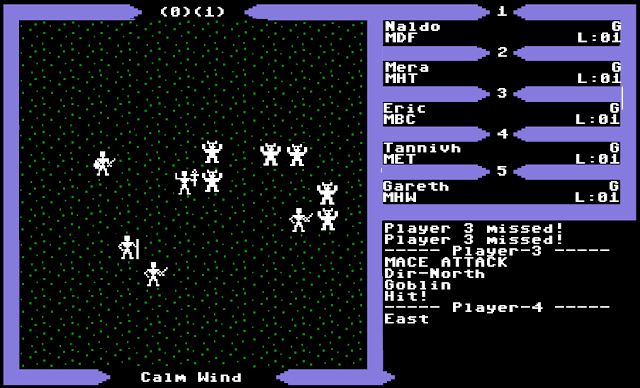 Seeing half of their group go down to the defenders, the goblins ran away howling...

... and then we ended the session with news that another goblin raiding party was coming from the south!