15th Day of Fall, 58th Year After the Doom - the forces of Chaos (composed of the men of the Black Brotherhood and Orcs) faced off against the Army of Enonia. The Army was a combination of recruited militia and mercenary professionals, led by Marshall Victor Roehm.

The Bestials and Chaos Men had taken over the town of Yew and held it for almost an entire season, enslaving the population that remained. The orc chieftain, Quadag-Ammar, was eager to face the humans and destroy their army.

While this battle was fought with HOTT, I adopted a scenario from One Hour Wargame “Scenario 14: Static Defense." The orcs would deploy one unit of similar elements near each objective (Yew and the Orc stronghold) and would have to keep at least one element of troops within 200 paces (2", 1 move) of both. So if the humans defeated the orcs by killing over half of their elements, but the orcs were still within that 1 move of both town and camp, the humans actually lost!

The rest of the deployment positioning was done following HOTT and using random setup from my campaign house rules. 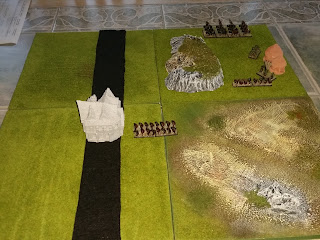 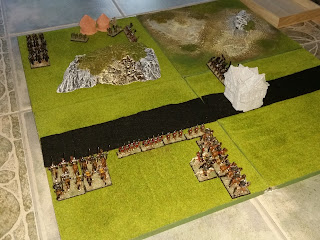 The opening moves: Marshall Roehm attempts to destroy the cavalry protecting the right flank of the orc camp with his cavalry, while sending his blades around the hill to the other side. He sends his knights around Yew to ride down the orc blades.

The orcs send the blades to face the knights, while meeting the cavalry charge head on. 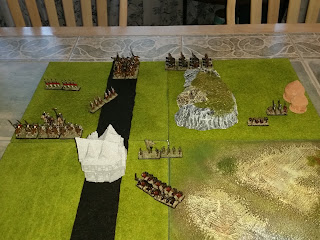 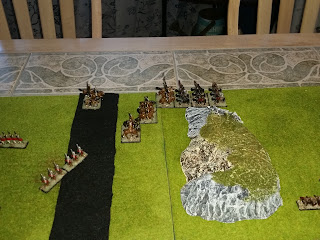 The human and orc cavalry trade blows and shove each other back and forth, in a series of recoils and pursuits. Slowly, the human cavalry gains the upper hand on the orcs, but there is one stubborn element that resists bravely!(One key rule I forgot here was the rule that if a unit recoils when it is flanked by a front facing enemy, it gets destroyed! This was my first HOTT battle in about a year, and I was not that well learned in the rules to begin with! This battle might have been over a lot sooner if I'd remembered that! D'oh!) 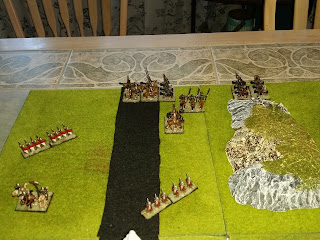 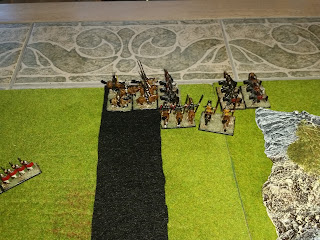 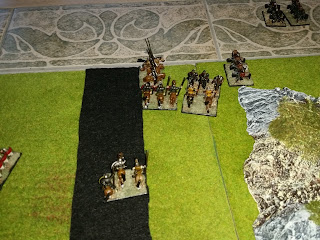 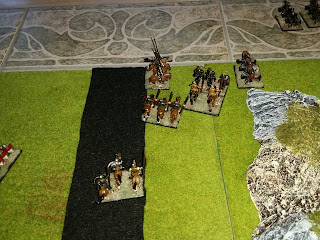 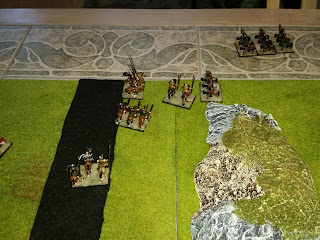 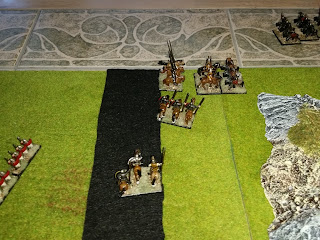 Marshall Roehm's knights face off against the orc swordsmen on the road to Yew and a melee ensues. 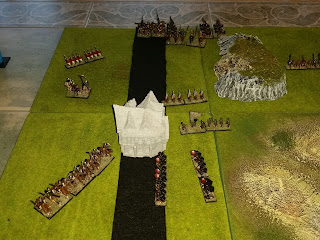 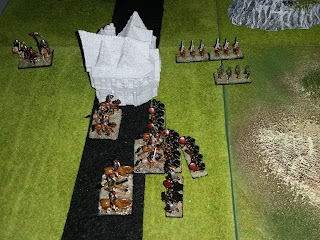 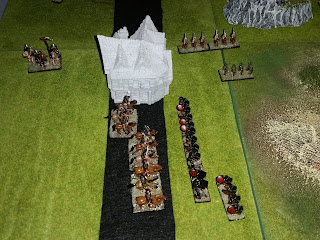 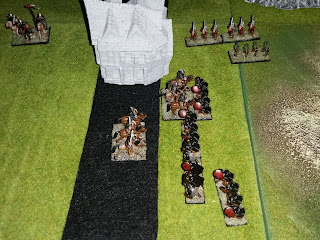 But disaster strikes for the humans! 2/3s of his knights fall to the blood thirsty swords of the orcs, and the remaining retreat towards Marshall Roehm's position. The orcs regroup and reform their lines, intent on running down the humans. The orc general, Quadag-Ammar, cheered on his troops to run the humans down. 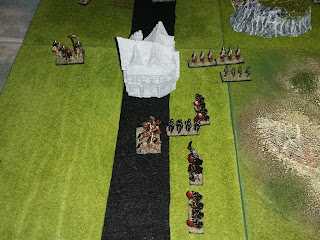 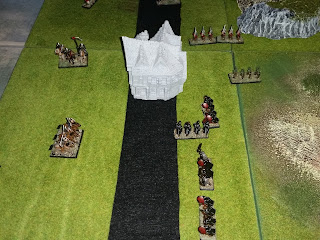 Meanwhile, the human cavalry makes a decision. One unit stays with the remaining orc cavalry unit, fighting back and forth across the battlefield. The other two human cavalry elements would slip in behind and make a dash towards the orc camp. The remaining unit of human men-at-arms also move to flank the orc camp, but Quadag-Ammar sends an element of orc swords and remaining archers to prevent that from happening! 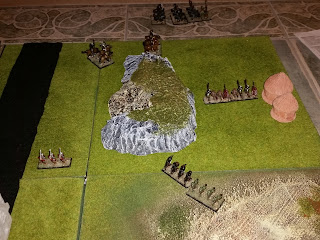 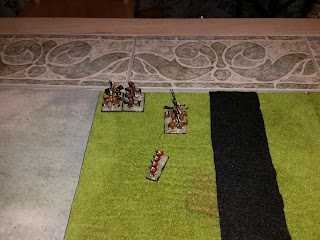 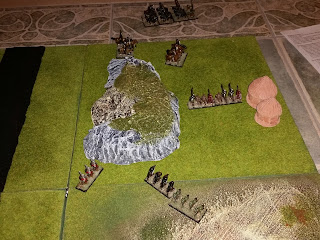 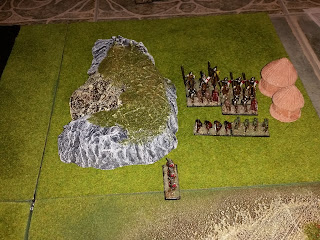 The battle comes down to two key engagements. The fight near the town of Yew between Marshall Roehm, his remaining knights and a unit of reserve spearmen facing the dour and fell-handed orc swords and their war chief on one side. The other fight near the orc camp between  the remaining human cavalry and men-at-arms facing a mixed group of orc spearchuckers, sword and archers. 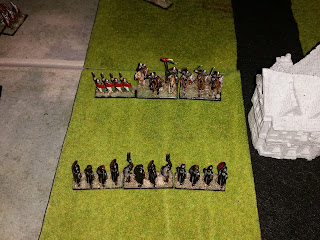 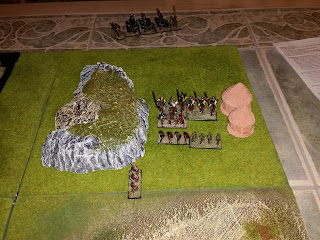 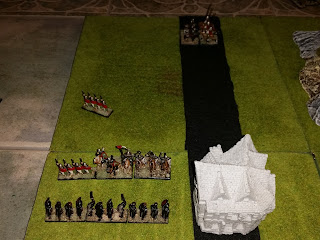 The humans are victorious! Roehm's knights are able to get between the orcs and Yew, and the orc camp is left open as the units protecting it are pushed away. With few troops left and the humans having destroyed over half of the orcs, the bestials' resolve wavers and Quadag-Ammar grudgingly orders the retreat. 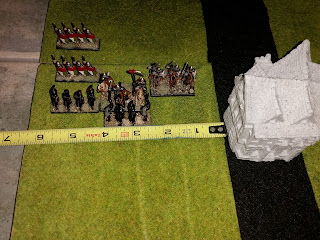 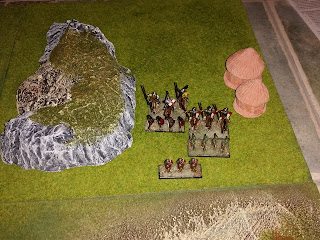 It really was a question of inches, as that middle unit was at 2.5", just outside the 1 move range. As was the archers near the orc stronghold. This was interesting to have a separate set of victory conditions above and beyond the normal HOTT rules. It force me as the human general to make choices about how to attack and what to attack, in order to ensure I'd freed either Yew or cleared out the camp.

The victory at Yew opens up another town to my players, albeit one that was under Bestial and Chaos rule for a season. It also opens up some interesting possibilities for the wargames campaign, to see what Duke Archanis Reynald may wish to do, now that he's established a solid line and two victories against the invading Orcs and Goblyns. My campaign now gets more interesting!
Labels: Chronicles of Etinerra campaign dark ages campaign HOTT wargames