I started this series to explore the updated release of "Chaos Wars", a set of miniatures wargaming rules by Ral Partha. In Part 2, I played a simple game of Chaos Wars that had only only ranged attacks, movement and melee. It was a pretty brutal, bloody game, to the death and pain!

This part, we're going to replay that same battle, but now with morale and rallying.

As last game, here are the forces - pretty evenly matched:

By including Morale/Rally, we'll need to add a fifth event to our turn:

Morale is simple. Any event that a unit takes casualties, at the end of that event, it must roll for morale. So this can happen as a result of ranged fire and melee, which means you might have morale checks happening a lot during a turn.

The mechanic is a look-up chart where you match your unit type against the unit type(s) that caused the casualties to find a target number. There are modifiers to hurt or help, and you roll a d6 and include the modifiers. Get the target number or higher, you're still in action. If not, you're routed and must retreat! 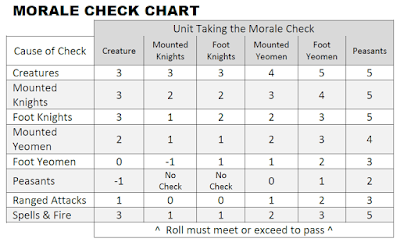 If you're fighting multiple units, then you use the toughest one (highest up in the chart) to check against.

Routing is pretty simple, you do a 180 and get the frak outta there! Game over, man! You rout your maximum move and then stop and stay put.

Rallying is a different story. At the end of each turn is the Rally event. This is where you can try and pull your troops back around and get them back in the game. Except for one small, tiny, itsy bitsy detail... if you don't have a leader type attached to your unit, then you have to roll a d6 against a target number. Failing the roll means the entire unit is destroyed!

If you do have a leader type attached, and suffered no casualities/hits that turn, rallying is automatic. (So, that means a unit has to wait at least 1 turn to rally with a leader) Now I've not yet started playing with "characters" who have "leadership titles", so rallying for me will be a one-dice, one-kill possibility!

So let's see how this all played out.

Set up was a bit more ... useful this time around. The dice weren't as crazy in where everyone went. 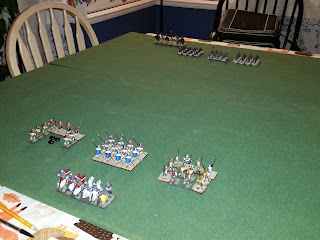 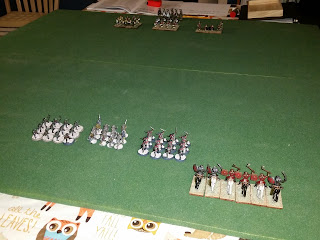 Turns 1 and 2 saw the Humans move their cavalry to the same flank as the Orc cavalry. The Orc lines jockeyed for position to keep their archers behind. (I was going to experiment with volley fire, which is indirect fire over friendlies. That ended up not happening thought...) 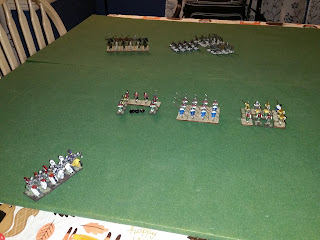 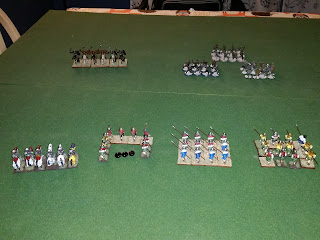 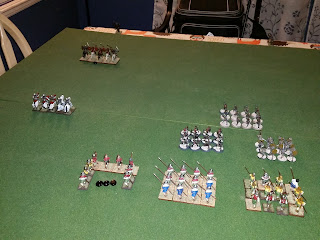 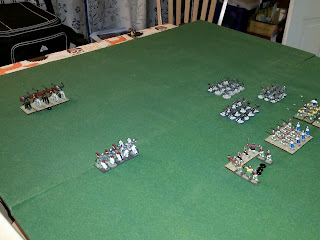 Turn 3 saw the Goblyn archers take advantage of a couple of rules - to whit, that as long as half the ranged attacking unit has LOS to the target, and at least one figure is within range, I can take the shot! In this case, with how my Orc and Goblyn foot troops had moved, I had clear shots to the Human foot or the Human spearmen. The Goblyns shot at the spearmen and they took two casualties! 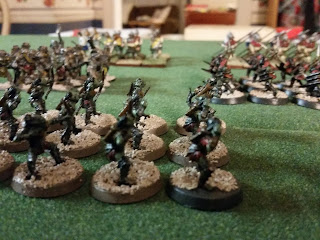 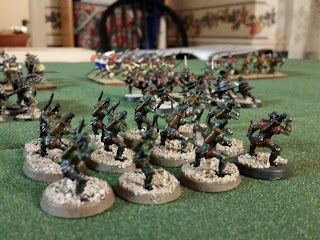 Now I had to check morale on those spearmen. They are Yeoman foot being attacked by Peasants. The Target number is 1. I rolled a 5 - the Humans are sticking with it!

However, on the other side of the board, the Human Cavalry and Orc Cavalry traded casualties in melee, so both had to check morale. The Humans passed, but the Orc Cavalry failed and routed!

With the next event being Rally, I decided to rally them right away. They needed a 4 and I rolled a...
...
...
TWO! Scratch an Orc cavalry unit. GONE! That pretty much ended the game, as the Human cavalry were now free to go after the other Bestials' flanks and rears... except they never managed to!

The next turn saw the Goblyn archers fire ineffectually at the Human archers and then a lot of movement. The Goblyn foot found themselves flanked and were effectively destroyed... except for one lone figure, who routed... and then rallied!

So here's this one Goblyn, facing a charging Human cavalry unit. "NONE SHALL PASS!" that Goblyn squeaked bravely... 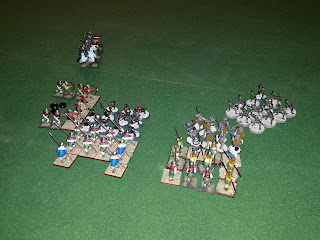 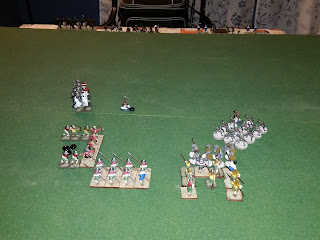 The Human spearmen flanked the Orc Foot, while the Goblyn archers flanked the Human Foot. Both the Foot units routed after some heavy casualties.

And that lone Goblyn foot, holding the Cavalry up? He died bravely, but he got clobbered. 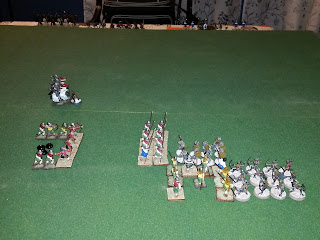 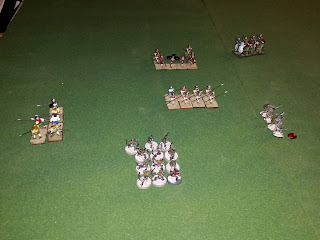 The Orc Foot tried to rally but failed and were eliminated. The Human Foot rallied. Seeing that they were the only unit left, facing Human Foot, spear, archers and cavalry, the Goblyn archers ran off to fight another day... 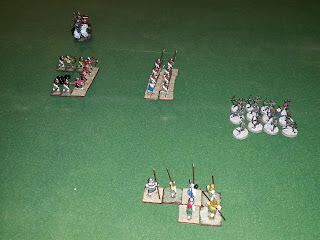 This game was much faster. Five turns as opposed to ten turns last game. Morale and rallying shortened this match quite a bit.

I didn't even bother with the Victory points. As the old "Iron Winds of War" rules said it - "Play until someone begs for mercy." Well, the Goblyns begged, and the Humans won.

Although I'm not playing with them yet, Unit Standards and Unit Musicians can affect morale and rallying. A standard applies bonuses to morale and rally checks. A musician can allow a unit to rally without a leader. If it fails, the unit remains routed, but alive. The musician is removed. So something to keep in mind!

I'm going to add in terrain next game *and* characters! That will add a huge dimension to the game, as they can rally troops and challenge each other!
Labels: Chaos Wars wargames