Are you not entertained?!? Is this not why you are here??!

Gladiator combat. In my experience, it's either all fun or all boring. I've seen it done as a simulationist approach, with each move calculated out to tiny detail, or it can be done as a mini-game, ala the Joust in Chainmail. 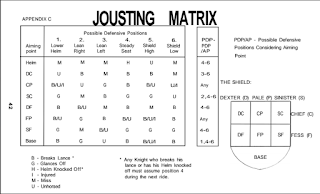 In our last solo-game session with @thePrincessWife and I, Aeli found herself in the desert city of Chaliam, seeking clues to a lost Wizard's Tower that her ancestor raised. Clues might be found the the Tomes of Heronicus, but the largest collection of those would be found with the fat wizard Jacen, who likes to live a with a little opulence.

Jacen, the lech that he is, leered at Aeli for awhile, but after learning of her martial prowess, came up with a different idea and made her an offer. He would be a sponsor of her in the Great Arena of Chaliam, and she would fight in his name, allowing him to clear up a gambling debt he owned to the Arena's producer.

I spent a few days casting about for a decent set of gladiator rules that would flow with OD&D, be quick in combat and not distract us from the main point... earning money for Jacen. Remembering my Gladiator, I opted to create my own rule... The Mob Rules!

2. For a new gladiator, determine the crowd's initial mood with 1d6+1.

4. For a 3 on 3 battle, each opponent dispatched by the gladiator adds a +2 to the end-of-combat mood check. If the gladiator loses, it is a -2 to the check.

7. That mood carries over to the next match.

The idea here is that if the crowd loves the gladiator, then the money flows from the mob to the producer (and then to the fighter) in the form of bets, increased attendance, food, etc. If not... then the gladiator gets less. This also flows well with keeping with my OD&D combat, fast and furious, with few fiddly bits.

There were some campaign specific things here - contestants could opt to wear the "golden sash" which meant they fought to the death. Double winnings for them! And the type of battles - in the Grand Arena, there were the 3x3 matches (yawn), the undercard 1x1 matches (yay) and the main event 1x1 (YAY) which could be a title match or just a big name fight.

Angie loved it. The battles flowed quickly, she loved doing the flourishes and her dice were hot, so her character, Aeli, kept winning! The crowd loved Aeli!

Aeli now finds herself in a non-title match against the current Arena champion, Red Garry. There's a dark cloud over the champions - the last 3 have ended up dead or missing! And Aeli might be getting set up as an "easy win" for the champion, at the expense of her patron, Jasen...