I started this series to explore the updated release of "Chaos Wars", a set of miniatures wargaming rules by Ral Partha. In Part 1, I went over the history and approach of the rules, as well as point out a simplified version of the rules that may be a reprint of the original game "Rules by Ral".

This part, we're going to jump right into a sample game and watch two small forces duke it out as we learn the basic mechanics. Here are the forces:

Each turn in Chaos Wars consists of events. For learning the rules, they recommend we focus on 4 events using simple troops:

For a game that doesn't have scenario rules and victory conditions, the rules recommend a 10 turn limit (although I far prefer the approach of the simplified version - "Continue until one player begs for mercy.") 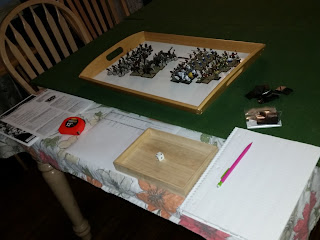 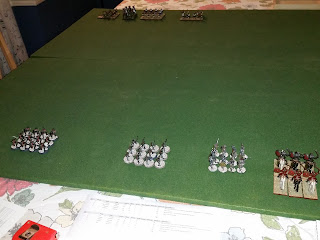 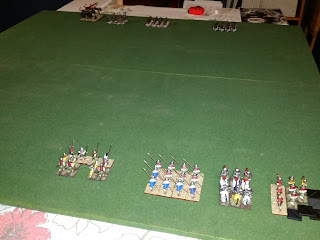 (and if you're wondering why the screwy start positions, read [1] below.)

First event is Initiative. In this stripped down game, Initiative will be important for movement and that's about it. 2d6 per side, highest wins. I re-rolled for ties. Interestingly, the winner doesn't have to accept initiative, they can pass it on.

Second event is Ranged Fire. Depending on what missile weapons your troops are equipped will determine their range. In this game, Human and Goblyn archers are equipped with "Common bows" so the range is 12". There are rules for line-of-sight (you have to have it on at least half of your target) and for indirect fire over your friends, and NO shooting into melees. We'll get into the mechanics of shooting in a couple of turns, as the forces draw closer.

Third event is Movement. Moving in Chaos Wars is ridiculously simple - as long as you stay in a group/four sided-ish shaped unit, and no figure/base exceeds the unit's movement rate, you can move, change facing, change shape in just about any way you like. I learned pretty quickly that I NEED movement trays! (if you're wondering about the weird shapes my human forces took, see [2] below.)

Fourth event is Melee. In Chaos Wars, all fighting and losses are considered simultaneous, so although your troops might get decimated, they might take your opponent down with them! We'll get into the mechanics of how melee works in a couple of turns.

So the first couple of turns consisted of the orcs sliding into a nice line, sending the Goblyn Troops off to harass the Human archers and possibly flank, while the Humans tried to switch positions between the archers and Men-at-arms to put their missiles to bear across the battlefield. 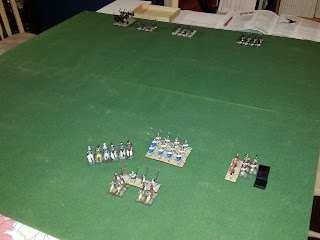 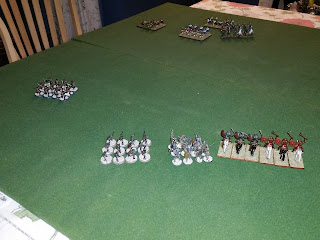 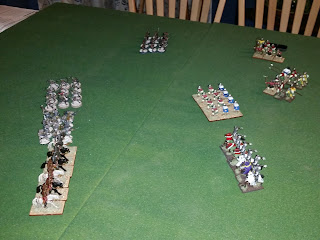 Soon enough, in Turn 3, we had some missile fire!

1. Initiative - Orcs 9/Humans 2 - Orcs win. It was this turn that I thought Initiative might make a difference. I was thinking that the Goblyn flankers might tie up the Human archers, not realizing what was about to happen...

2. Ranged Fire - both Human and Goblyn archers have units within their range, so the arrows go flying!

The Goblyn Archers fire first. The mechanic for shooting works like this - you roll a 1d6. You add in modifiers, for things like indirect fire, casualties in the firing unit or terrain considerations. You then divide the modified roll by the target's "Armor" value, using standard round up/down rules.

In return, the Humans Archers fired and rolled a 6! Their target was Goblyn Peasant Infantry (the flankers), who have an Armor value of 1. 6/1 = 6... and I decimate HALF of the attacking Goblyn flankers with one attack! "Yay!" cheer the humans. 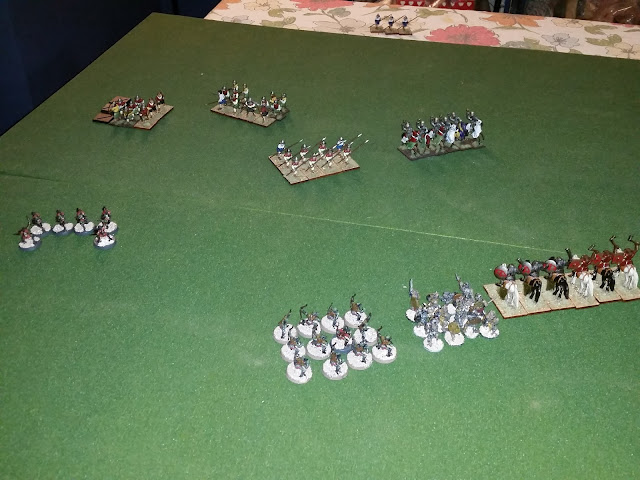 3. Movement - the lines continue to move forward. The humans (wisely) abandon the idea of swapping places between the archers and men-at-arms, seeing how badly the archers decimated the Goblyn flankers with missile fire. The Orc cavalry, full of blood-fury, move into melee with the Human Cavalry.

4. Melee - UNLEASH HELL! ... ... or roll the dice. In this simplified game, we're not doing any sort of morale checks, so melees will be To The Death!

The mechanic for melee is about the same as for Ranged - roll 1d6. Add modifiers, subtract penalties. Divide the modified roll by the target's Armor, rounding up/down - that's the number of casualties that your opponent takes.

Something that comes into play in melee are base combat values and weapon upgrades. You can have peasant troops, yeoman troops or knight troops. Think levies, drilled militia, professional/veteran. So your roll might have a modifier -1/0/+1 (respectively). The type of weapons you've bought for your troops might also affect your roll.

In this case, when the Orc Yeoman Cavalry attacked, they rolled a 5. They get a +1 to their roll for having Standard Mounts. So their modified roll of 6 is divided by the Human Cavalry's Armor of 3. That means the Humans take 2 casualties. 5 (+1) / 3 = 2.

Melee is simultaneous, so although the humans take a casualty, it doesn't reflect until melee is over. So I took to moving the casualties slightly back, but having them on the board so I could still count them. The Human cavalry strikes back, rolling 2, adding +1 for Standard Mount, dividing by Orcs Armor value of 3. 1 casualty to the Orcs! 2 (+1) / 3 = 1.

(Picture was taken before removing the Orc casualty) 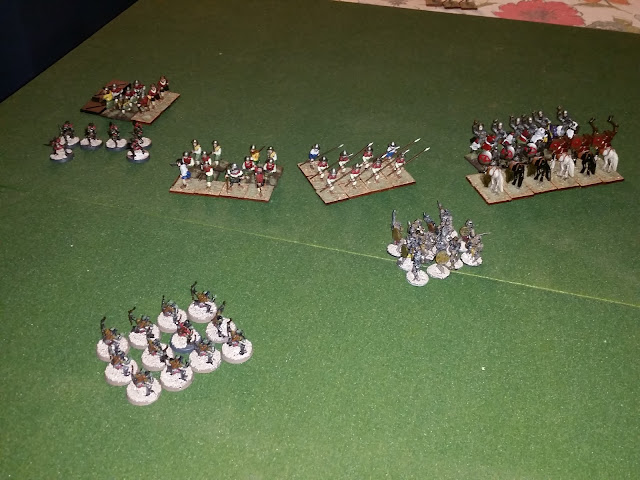 The forces slug it out. Once all of the units come into melee, ranged attacks no longer occur - the archers draw swords and engage. It was also during these two turns that I rolled 4 1's in a row. No, really... here's my notes: 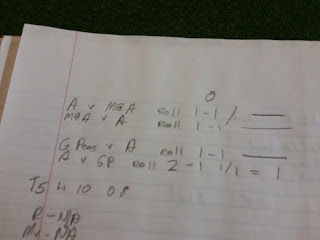 The battle between the Goblyn flankers and Human Archers was over at the end of Turn 5 - the entire force of Goblyns decimated! Now I was going to see how flanking worked, as I could move that unit to engage something else. 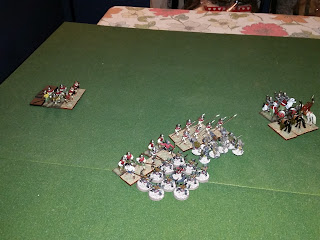 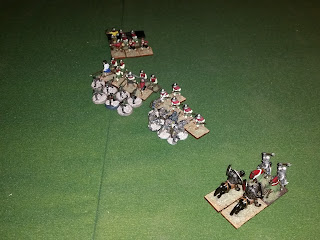 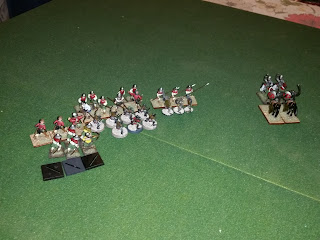 With the Human Archers now flanking the Goblyn Archers, they can add a +1 to their melee roll. So in essence, flanking gives you an extra casualty if you score hits, and attacking from the rear (+2) can give you 2 extra causalities. With the help, the Goblyn Archers are obliterated, and the other units have whittled each other down to almost nothing.

When you take causalities, that starts to affect your roll modifiers. For infantry troops, you suffer a -1 penalty for each two figures lost from the unit. For cavalry, you take a -1 penalty for EACH figure lost. For 3 turns, neither cavalry unit took casualties, mainly because great rolls were negated by the casualty loss penalty 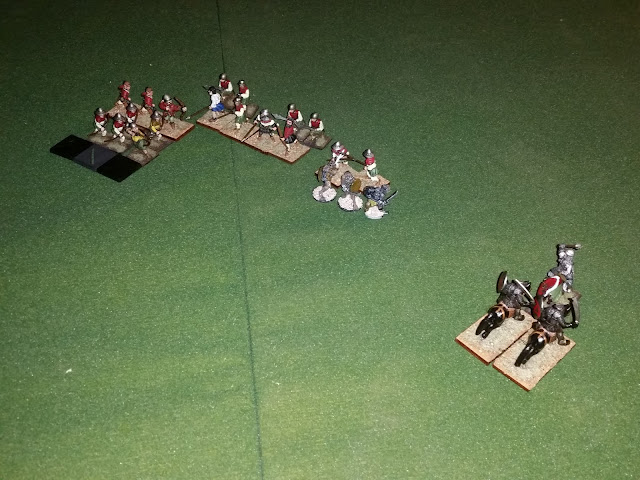 The basic mechanic for Ranged and Melee is quick and easy - 1d6 roll +/- modifiers / Target armor = casualties taken by the target/opponent.

Movement is pretty easy as well, just keeping your units in a block/rectangle/line and no one base moves more than the unit's movement rate. Once in contact, I squared off the units, but that's the DBA/HOTT player in me...

Without morale rules, this game feels and plays a lot like One Hour Wargames by Neil Thomas! Units locked in melee to the death till one side is destroyed, simple movement - I might try using some of the scenarios with these simplified rules and set up.

I also learned that when morale comes into play, this is going to change things up quite a bit.

Well.. see, that's the thing. I didn't have a scenario with victory conditions, so Chaos Wars "helpfully" provides you with a technique of how to "weigh" the losses your enemy took versus how much of the unit was destroyed. The idea is to come to "thirds" of the forces destroyed, award "Victory Points" to those thirds, award additional points for commands killed and standards taken and blahblabhblahblah...  when I crunched the numbers, it was a draw.

No, really. Take a look above at the picture... to me, this looks like the Bestials got their asses handed to them... but because I didn't kill enough of them, I only scored a 1/3rd toward Victory Points. WTF?

I get it though... You get more points for routed units, which makes sense, and nobody routed. And since I had such a small number of army points to begin with, I could see where the numbers don't always tell the story.

[1] - the screwy start positions come from my random deployment rules from my Campaign Wargame rules. To prevent bias when I'm doing solo games, I use the chart to determine position. I would have liked the human archers more towards the middle but the dice had a different story to tell...

[2] - the weird unit shapes. This is what happens when you don't have movement trays AND you have units where the figures have different base sizes. I did the best I could to present consistent frontages and sides. I'm trying to get to a consistent base size of 1" fronts for my 25mm troop/cavalry figures.

Let me know what you think? Have you tried to play the simplified version or the full version with just Init/Ranged/Move/Melee? How did it go?
Labels: Chaos Wars wargames