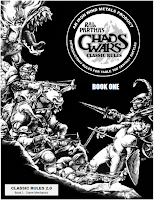 Back in the hoary days of the mid 80s, the miniatures company Ral Partha released a set of wargame miniatures rules called "Rules According to Ral" which became known as Chaos Wars. Unfortunately, the ruleset never took off and Ral Partha went on to concentrate on the AD&D line of miniatures, then Battletech and Shadowrun figures. As the RPG/miniatures industries went through various changes through the Nineties and 'Aughts, Ral Partha faded to a name in history, remembered fondly for great figures.

However, in 2015, Iron Wind Metals revived the Ral Partha name, forming a division of their company. They bootstrapped the whole deal with a rerelease of Chaos Wars and a whole bunch of discontinued miniatures through a very successful Kickstarter. They followed that up in 2016 with a second wave of miniatures and have made it pretty clear that they intend on continuing the rerelease with more miniatures in the future.

I love miniatures and I've been painting Ral Partha figures since the 1980s. It started with a couple of blisters of fantasy figures, followed by Battletech figures, and then collecting more Ral Partha figures through Ebay or from Iron Wind Metals with their grab-bag bin at cons. So when the Wave 1 Kickstarter came out, I jumped right into it.

So it's been all good, and I've been busy painting those new figures. Except there's one tiny thing that I keep not doing... learning and playing the actual, flarghin' game! Well, we're going to correct that. I'm going to be learning, testing, and getting myself trained up in Chaos Wars so that I can run a demo/game at GaryCon next March. And I'll be writing about it so that you can learn what appears to be a very nice, fun game.

First off, the rules. You can download the Chaos Wars rules, for free. Pretty damn nice, right? Can't beat free!
(Update 5/11/22 - There's a new link to the rules! https://ralparthalegacy.com/pages/chaos-wars-rule-books-free-downloads )
Now, if you start to thumb through the rules, the very first thing you're going to see is that these rules were written by someone who fucking LOVES old school rule books like Squad Leader. If you never read the original Squad Leader rules, well, Chaos Wars will let you feel the love as the rules are broken down into numbered sections, sub-sections and lines/paragraphs. Yep, you too will be referred to rule 3:3.4, for example.

Don't let it bother you, because at the end of the day, the rules are pretty simple and quick.

From the get-go, the rules encourage you to Keep It Simple, Stupid and tell you to use a beginner army to learn with. (found in section 35:1.1, mind you, which is in Book 2 - Building An Army) You stick with just basic troops and to concentrate on learning the four basic events in the game:
1. Initiative
2. Ranged Combat
3. Movement
4. Melee Combat

They then give a recommendation on other parts to add as you get the hang of things: Morale/Rally, Terrain, Characters/Challenges, then the fantasy stuff - Magic, Creatures, War Machines and the like. Things we'll cover as I learn the rules.

OK, so let's go look at that sample army. If you use this approach, you'll need 60 miniatures PER ARMY. That's a lot of minis! That might be a bit daunting to someone just starting out though. If you have close to enough, I recommend using empty bases, pennies, counters, whatever, to fill in for what you don't have 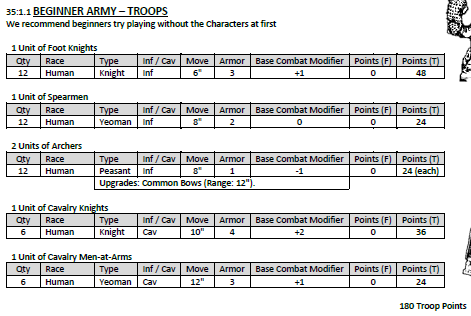 I definitely do not have 120 humans to put two human armies against each other. So... since I tie everything back to my campaign, I'm going to use some variations on the army size and composition. I'll create the following two armies out of what I have painted/on hand. As I get more into the rules, these armies will change to include new types, upgrades and extras. [See 1 below] 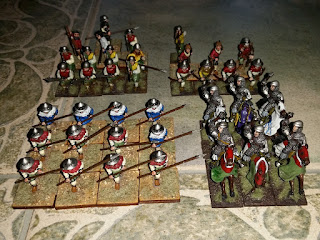 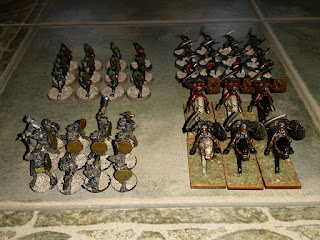 The way Chaos Wars works is that you combine like figures ("troops") into units of 12 figures each. (6 if mounted)  There's no assumption of scale here - Chaos Wars is much like HOTT or DBA in abstracting the number of men/scale involved. The rules do say they are compatible with 15mm figures, if you want to save money/space. There's no required base size, although they do recommend a facing of  60mm to 75mm for 3 figure bases. So roughly 20-25mm (3/4" to 1") base size per figure.

As you can see, I have a mix of base sizes, so I'll make do with what I have. I had been basing my figures at 3/4" frontage for Book of War, but decided to go to 1" consistent on everything. Fortunately, Chaos Wars is pretty flexible. I'll need to fill in a few empty bases for my human archers, I have only 8.

OK, so I have my armies, now what? Well, stay tuned... In Part 2 of this series, we will go over the basics of Chaos Wars as these two armies slug it on on the field of battle!


[1] How did I come up with this army as a starter instead of the sample they recommend? Well, when I was digging through the books, in Book 3 - Campaign, they give a breakdown of the Elvish and Orcish forces. Lo and behold, there's a tiny "required" force that consists of only about 24 figures per side, that you start the campaign with. So I used that as a guide for making two armies out of what I have for my D&D campaign and skirmish games. Because I didn't want to use characters yet, I just chunked in more troop types. 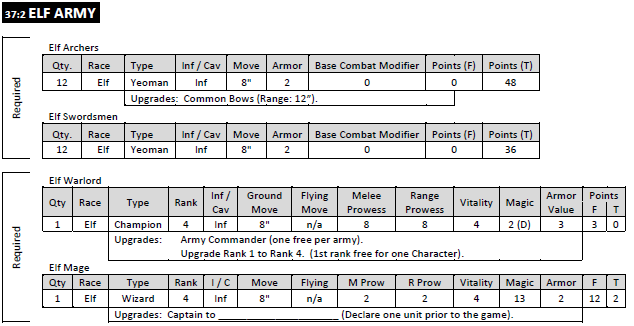 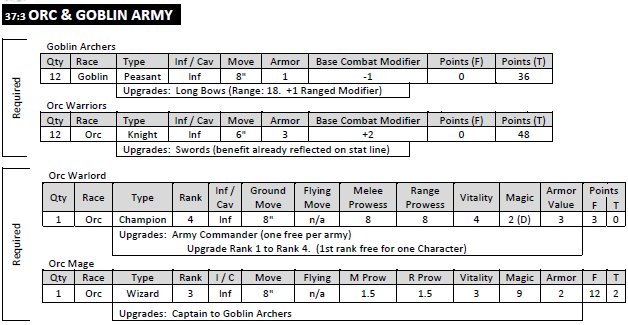