The engagement began on a battlefield of half rough-going, half clear. Marshall Hummil (the Human General) and his cavalry found themselves in the rough bad going, while his spear and blades had an easier going with a road and clear grasslands. The orc chieftain - Naas’samman - loosed his hordes down the middle of the battlefield in an attempt to divide the forces, while his warbands and blades kept to the right to engage the human infantry. 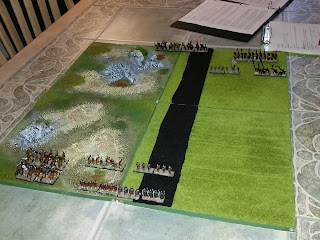 The human cavalry picked its way through the rough, while the infantry and orc hordes slowly maneuvered towards each other. The battle was finally joined when the cavalry got into some clear and smashed into the Orc hordes.The human blades faced off against the Orc warbands and quickly dispatched their foes. 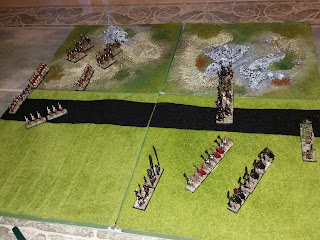 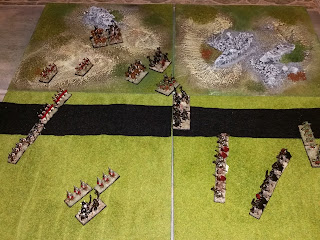 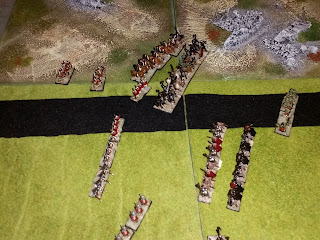 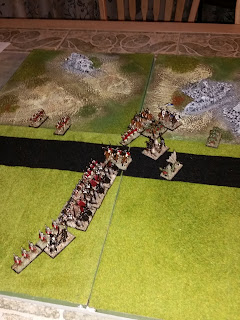 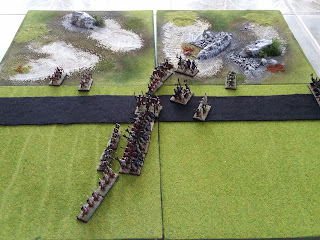 It was only when the human regular blades and cavalry joined in the battle at the flanks and rear that the orc spears found themselves entrapped. It was only a matter of time until their forces were whittled down enough that the orcs’ resolve was broken and they fled the field of battle. 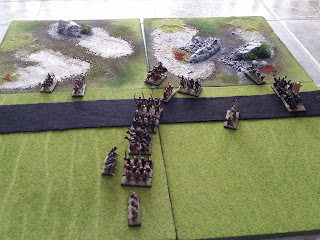 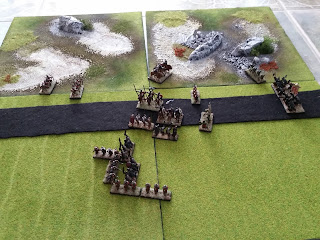 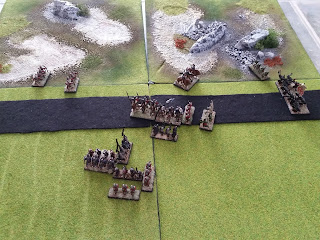 In campaign terms, this battle took place at the end of a lot of maneuvering at the strategic level. I do that part of the campaign on a private set of maps on Roll20. Because Roll20 allows me to import my hex maps, and I can create custom tokens to serve as the "chits", I can do this sort of game without taking up wall or tablespace!

I decided to conduct this battle using HOTT and my campaign rules, which have liberally used ideas/content from De Bellis Solitarius (solo DBA). Why HOTT, when I've had so much fun with OHW? I like HOTT, I like the variety in elements, I like the way recoil/flee work, and I like playing the HOTT system. I've always enjoyed the DBA/HOTT rules, and this was a good excuse to dust off the rulebook and relearn the system.

One of the things I will do at the end of each campaign wargame battle is come up with outcome actions/activities depending on who wins. So if the Orcs win, I list 3 things that could happen that favor the Orcs and are logical outcomes based on the Orcs' overall goals. If the humans win, here's 3 things that favor the humans. Once the battle is over, I dice for which result happens. It prevents some bias from happening.

That is one thing that I have to prevent with these battles is my bias. Using the tactical disposition rules (basically a way of injecting some randomness into what each side does) and these somewhat random outcomes is a way of trying not to have too much bias. It's not perfect, but it has already surprised me with some crazy results. The dice love to tell a story that I would not have expected.

PS. As this was my first HOTT game in.. well.. years, I know I didn't lay out the battlefield BtB, and I'm pretty sure I screwed up on recoils when the element was flanked by a front edge (which should have led to a destroyed results). As well as some movement mistakes. But... play and learn!
Labels: Chronicles of Etinerra campaign dark ages campaign HOTT miniatures solo wargames