A great comment by "Stu Rat" on my previous post led me to take a look at just how deadly Tony Bath's Hyboria was to NPCs! (see his book "Setting Up a Wargames Campaign"). 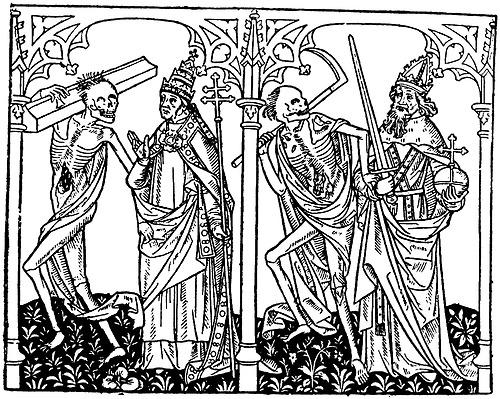 Given Tony's original chart, it seems that you had less than 25% chance of living to see the age of twenty! It got worse the older you got. At 60, you'd basically be advised to just lie in bed till Death came knocking...

So better enjoy those teenage years, as those were the golden days of your life...

Now I don't know if Tony did the math, if he really used this chart and wondered why all his commanders were dying before battle, but the exercise forced me to think about my campaign, how magick and divine healing may come into the picture and just what is a good life expectancy.

I've modeled my campaign against European Middle Ages to some extent, with the Domesday calculations and approach. So it seems reasonable to look at death and life expectancy for that period... except there's not a lot of agreement except that life was short, brutal and not fun from our modern POV. Here's an example - flip to page 8: http://content.ucpress.edu/chapters/11633.ch01.pdf

There's one aspect of life in my campaign that doesn't factor into the Middle Ages figure though... the presence of magick and divine powers. Unfortunately, I've calculated how little that would factor into the survival of a draft pool for a military force, so I am forced to conclude that it wouldn't factor in very much for a population either. It might/could for specific circumstances - those who can afford it, or for our brave PCs, but by and large, not so much.

So, what to do? I'm going to go back to the original calculations I made and assume that for children and most adults, a 50% life expectancy for most of their life is reasonable. From poking around the web, that number for the Middle Ages has cropped up, and it feels right for me. My campaign is about imagination and "Yea, I like this, we'll go with this" versus a simulationist approach. So here's the updated chart:

This feels right to me, and maintains the approach that Tony originally took. I wonder what he would have thought about this approach.
Labels: Chronicles of Etinerra campaign dark ages campaign wargames