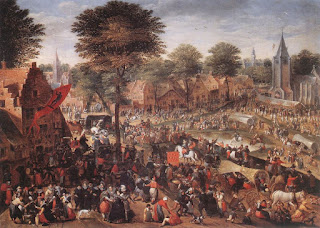 Too often, NPCs have felt as stiff and unchanging as the little metal figures I parade across the table. I've caught hints over the years that this doesn't need to be so. Certainly, as players interact with NPCs, lives will change and things will happen. That doesn't seem to be a very dynamic world, though.

In reading Tony Bath's "Setting Up a Wargames Campaign" and reading some stories about how Professor MAR Barker ran things in his Tekumel campaign, I've found that they had charts and processes to check on the status of each NPC at a given timepoint - yearly, at the minimum. The story goes that Professor Barker would sit down with his 1,500 index cards monthly and figure out who lived and died.

Well, I'm getting to the point where I am looking to inject that sort of dynamic view into my campaign world. I've got armies tilting against each other, I've got some pretty big movers and shakers doing their thing, I've got players trying to to survive and improve this world... it's time to make the NPCs come to life.

Delving into Bath's book, and getting pointed to the old AD&D Oriental Adventure XXXXXXX has given me a starting point. What's below is a first draft of what I'll use on a yearly and seasonal basis to figure out what happens to the NPCs. I'm slowly putting them into an Access database, and I'll use the programmability of Access to automate this process. It'll be interesting to see what happens.

Comments, questions, "You're an idiot" are welcome... well... mostly welcome.

This comes from my "Wargames Campaign Rules" document.

Determine if death/illness occurs (Yearly, for each NPC):

Determine gender. Once baby reaches 10, then determine what they will be class-wise, at 15, roll stats.

Determine other events
Some events will set the tone for a large area, like a duchy, for the year. Seasonal events would be in line with the yearly event, if they conflict, reroll the seasonal. For an event that affects an NPC, determine if this is at the ducal level or lower.

Seasonal - Nobility -
Event affects the NPC or the sphere of their influence/responsibility. These are events applicable for nobility/generals - those who control land/people.