Making Everything Count - HOTT recap and paying it forward

So the orcs and humans marched out on their little, itty, bitty 15mm feet to go to war... 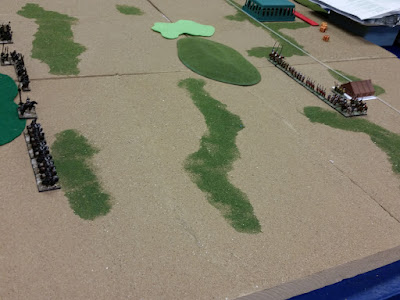 ... sounds funnier in my head than I guess it really is, but I'm a blogger, not a frakkin' NYT best-seller author.

This past Thursday, the good folks who are part of the Chicago Skirmish group got together at Games Plus to toss dice, push metal/plastic and have some fun. I crunched through two armies painted in the colors and arrayed in the style from my D&D campaign and put them to field using the HOTT (Hordes of the Things) miniature wargame rules.

This was my first time getting into 15mm scale and it is a ton of fun to paint and play. I can get away with a lot of shortcuts and simple/obvious color schemes because at gametable level, all we cared about was who was finally going to kill more elements than the other, versus whether the damn eyes had the pupil exactly center. I finished two armies in roughly 2 1/2 weeks. That's pretty fast, considering that was about 90 figures, and a bunch of them were figure/horse combos.

HOTT can play fast, or semi-fast, depending on your dice. Our first game out, the Orc General charged right up to the Human General, they pushed each other around a bit and then the Orc warbands killed the General while he was recoiling from an attack.

Score 1 to the snaggle-toothed Planet of the Apes dudes... I mean, the Orcs on horses.

Second round took 3x as long to play, mainly because I kept interfering with the human's maneuvering and trying to sneak my Hordes/Warband end-run to capture their camp or flag or whatever they were hiding in that long-house. Unfortunately, the dice said "Screw you, I'm going home" and I lost the game.

Pics of the table and games at the end...

And this is where my "Make Everything Count" rule come into play.

So a long time ago, some dude by the name of Jeff Rients wrote a pretty cool blog post called "How to Awesome Up Your Players." Yea, go ahead and click the link, it's OK. I'll wait. 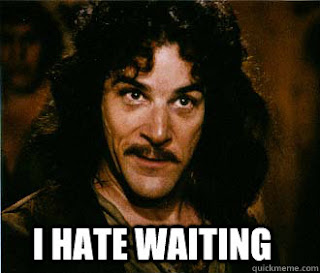 So the upshot is making the game worth it to the players.

Well, take that chocolate and put it in the peanut butter of how Tony Bath ran his Hyborean Campaign back in the day. His book Setting Up A Wargames Campaign is fun to read, but it also gave me some ideas - never let a game go to waste. He didn't put that there, but the dude geared everything towards figuring out if Conan smashed puny gods, or if those damn kids ruined the day again.

Since reading that blog post and this book, I've made it a point to do the same - make everything count. That's why my Chainmail battle a few years ago determined how a major NPC's father had died and he had assumed leadership of the area the PCs are campaigning in. A follow-up Chainmail battle determined that the recently passed harvest and winter wasn't a bad one for the area, meaning prices and people are pretty OK right now.

With this recent set of HOTT battles, I have two results, an Orc quick-kill, and a successful human victory turning back a spirited Orc attack. I don't know if I'll need these now, or a few months or years from now, but they count, and now that player has somehow participated in my campaign. Not by rolling 3d6x6, here's your first level character, but playing a wargame in my campaign and making a difference in it.

How do you open up your campaign beyond your one RPG group? Why couldn't a game of HOTT, or MtG, or even poker determine something cool about your campaign world?

Now for the pictures of 15mm armies... it was a lot of fun painting these up. The humans are painted in the colors of Marshall Roehm, the "lord" of the town/lands of Enonia - in red/green/white. There are a couple of units painted in the Enonian militia colors - yellow/green. Enonia is where the PCs home base is.

The Orcs of the Bloody Eye are painted with a burgundy color and with boltgun/tinbitz colors for armor/weapons. The Bloody Eye symbol on their shields/standards is what the PCs see when they are out and about in the wild lands east of Enonia.

I've given you links to the various wiki articles from my campaign, if you'd like to read more. Enjoy!