Chris and I have started a somewhat monthly Battletech game. Gives me a chance to use those nice new shiny 'Mechs I've painted. His son comes over as well, and the two plot and plan on how to best reduce my Lance to burning hulks. Not quite like this, but close...

This Friday, they chose a force of Marik 'Mechs with Heavies and Mediums. After I selected similar, they chose to allow me to pick maps and they picked their starting spot. I set up approximately opposite and we started. The scenario was a "training exercise" to where if a Mech lost a leg or gyro, or all weapons, they were destroyed ... or unless they were destroyed in the process. Since we're not campaigning (yet), it was going to be a fight to the death. 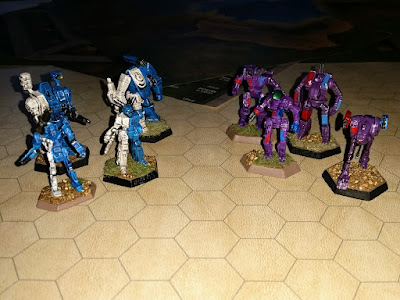 The star of the night? Well, that would be the CLNT-2-3T Clint. Armed with a measly Autocannon/5 and 2 medium lasers, the Clint makes a good diversionary, recon 'Mech. Except, this Friday night, where every time I declared fired for the Medium Mech, all my friends heard was this...


Let's tally up what the Clint did...

Yes, the Clint was the bad-ass of the night.
This battle took SIX hours. Sheesh! And that was with us starting to really get the hang of the numbers, with using the Box of Death to resolve cluster fire and with very little breaks. The surviving Marik Locust withdrew, but the Steiner forces had a savagely mauled Thunderbolt and Warhammer. The Wasp and Clint... no problem!

Next time we meet, we're going to use Mech Attacks and see how that plays. While the bubbles of armor and scoring each missile may be simulationist fun, we want to see how a faster game plays.

Some more vanity pictures from our match.