The latter half of February has been a hectic one for me! GaryCon prep, podcasting, running several games... and still playing HOTT! I just haven't had much time to blog about it.

Later on in this post, I'll get into how I use HOTT (and by extension, DBA) to fight published scenarios from sources such as Neil Thomas's "One Hour Wargames" or Charles Grant's "Scenarios for Wargames."

First, the battles and pictures!

Week 7 - the Week of the Hordes
I have played with Hordes, but for some reason, I never took advantage of the "replacing hordes" option. I decided to see how it would play out with my Orcs bringing hordes to the fight! 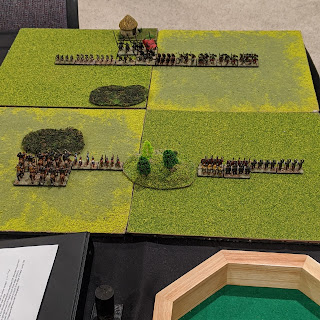 The terrain would be a bit challenging for the attacking humans! That impassable hill split up the forces. The human commander opted to stack the lighter forces to the left, to see how things would play out. The orcs had put their hordes to their left  and the human commander set his blades and spears opposite. 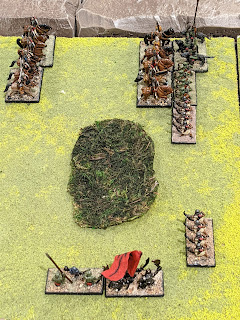 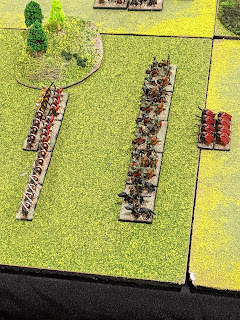 To the left flank of the humans, the shooters were quickly cut down by orc archers and by the warbands. The human riders swung around the marsh to attack in the good going but they were pushed back!

On the left flank of the orcs, the hordes marched ahead, with goblin wargs on their flank. Orc spears held reserve to prevent any breakouts. The lines collided and hordes were cut down en-masse by dour blades and spears! 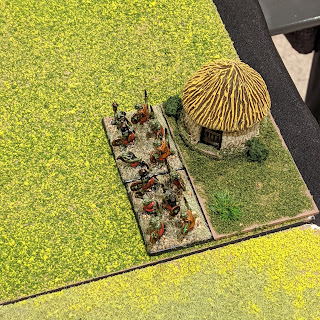 But guess who rolls a 6 for PIPs? The hordes keep coming! Fun! 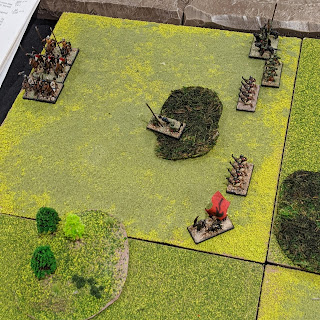 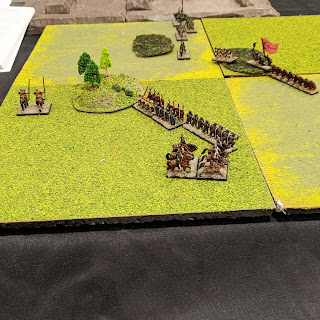 Not wanting to get surrounded, the human riders opted to a strategic retreat and join up with the forces on the other side of the hill. Distance and the hill makes this an expensive retreat, PIP-wise, but forming a column helps! The orcs, seeing the peril, move to reform their own line. 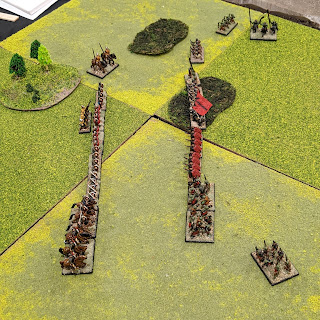 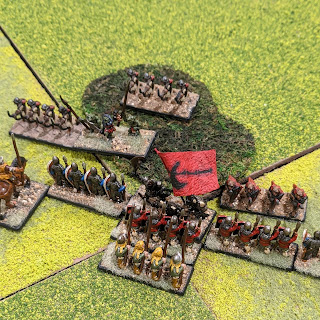 The lines form again and smash into each other! With recoils and the warband's penchant for pursuit, the Orc General unit finds himself surrounded! The spears cut down the warband and the Warchief is lost - the Orcs flee the field!

The hordes made this fun! The orcs rolled a number of 5s and 6s for PIPs, making it easy to bring them back. The orcs started out doing very well with turning back the attack by the riders and shooters, but then the momentum shifted. The humans rolled some great rolls once they reformed the line, and the pursuing Orc General-Warband put himself in a bad position.

This week, I decided to try out a Hero element to see how it played. I put the Hero on the human's side, and I decided to oppose it by putting a Behemoth on the Orcs side. 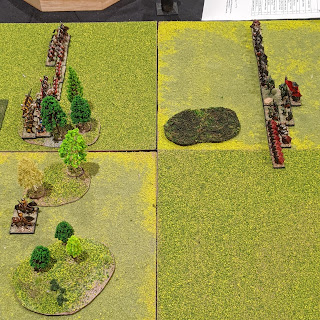 The humans line up to defend their fort from a force of orcs approaching. The human major details an element of riders to to swing wide as a harassing force. The humans are heartened by the appearance of a local hero and war veteran, Sir Larry, who has come to assist with the defence! 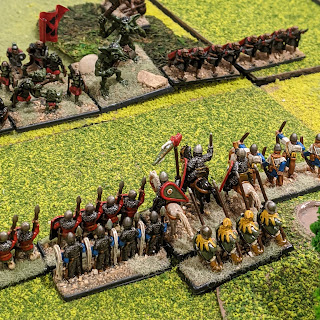 As the lines approach each other, the trolls and Sir Larry eye each other warily. 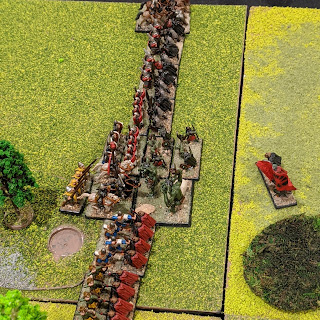 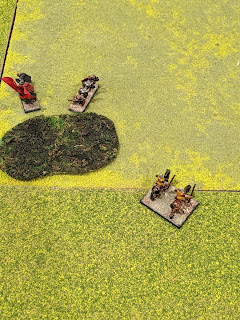 Smash! The lines come together and trade blows! Meanwhile, the riders come sneaking behind, forcing the Orc Warchief to detail a unit to keep an eye on them. 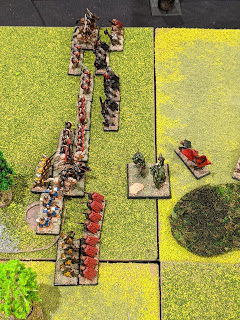 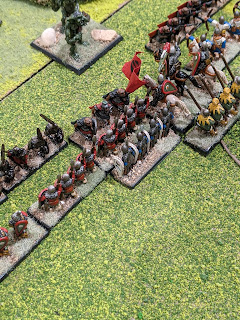 The hero and troll trade blows and insults, but neither side lands a telling blow. The orc line begins to crumble, forcing the Warchief to plug the hole. Unfortunately, due to recoils, he finds himself alone and overlapped. A 5v1 roll seals the Warchief's fate as once again, the humans win with a General kill!

I was not very impressed with the Hero! He and the troll just pushed each other back and forth the entire combat. Perhaps it would have been more interesting if the Orcs had a Mage to threaten the Hero with bespelling! I'm sure that as I use them more, fun things will happen!

Week 9 - the Week of the Scenario

I've been playing Orcs/Goblins vs. the Humans for 8 weeks now, and the Humans have won each and every time! I thought it was time for a change...

I've written about this book, One Hour Wargames by Neil Thomas. It's one of my favorite wargame books, not only for the simple rules, but for the THIRTY scenarios that Neil lays out in the second half of the book.

Scenarios are one of the ways I love to do solo gaming. Set up the situation and let me at it. Between this book and "Scenarios for Wargames" by Charles Grant, I have many situations to play from!

I rolled randomly on my d30 and came up with Scenario 29 - Shambolic Command. This is a fun scenario! The basic jist is that Blue must defend a hill, but is such an inept commander that they can only order a limited number of troops at any one time. 3/4ths of the force are on the hills, with a reserve on the far end of the board. Red's job, with a smaller force, is to take the hill!

Since the Orcs have been getting beaten up quite a bit, I assigned them to Red as the attackers. Blue would try to hold the hill.

The scenario is written so that Blue is numerically superior, so that meant that the Humans would get a 24 AP army, and the Orcs get only a 16 AP army. To implement the "shambolic command", I decided that the Humans would only get 1 or 2 PIPs per turn (1-3, 4-6). I'll go into more details about how I interpreted the scenario for HOTT after the battle report. 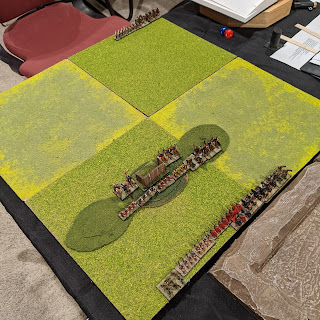 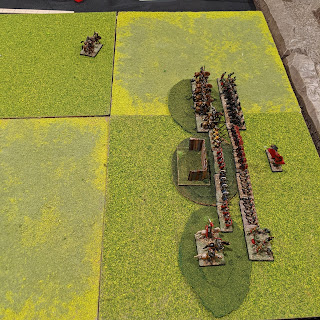 The layout is per the scenario. I didn't have one hill, so I laid out a series of hills as a ridge for the Humans to guard. The Orcs arrive and slowly march up the ridge. The Human commander positioned himself on his right to prevent the Orc Hordes from flanking. Those 1 to 2 PIPs made the Humans crawl into position. The Orcs prepared to charge! 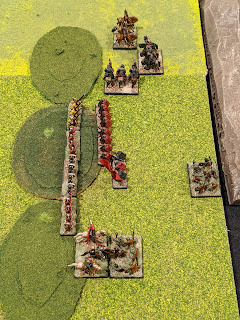 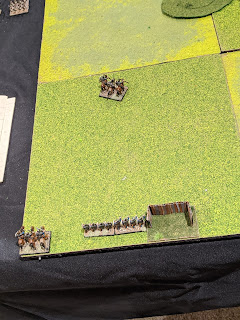 The initial charge was repulsed, with the Humans holding the high ground. (That +1 for being up-hill made a difference!) The Orc Hordes were defeated, but more swarmed towards the hill! On the Human's left flank, the Orc Knights decimated the Shooters and Knight element. The reserves could only look on, with little leadership (PIPs) available. The Human commander had his hands full just trying to keep the battle line organized! 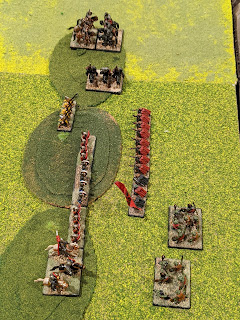 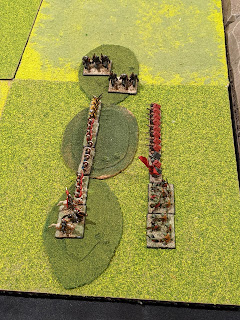 The Orc Knights easily dispatched the Human Riders who flung themselves into a desperate counter-attack. The defending Human line stepped back, preparing themselves for another Orc attack that had been reinvigorated by the arrival of more Hordes! 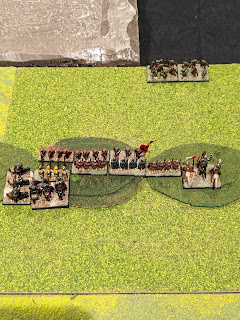 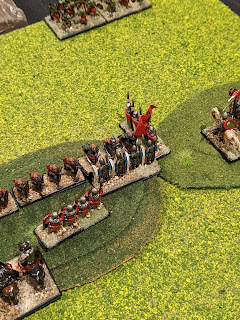 The Orcs begin to roll down the Humans' left flank. Then, seeing an opportunity, the Human Spears swarmed around the Orc's Warchief element and destroyed it! Unfortunately, the Humans had lost too many of their own, the bodies littering the hillside. Thus heartened, the Orcs continued grimly on, although they would feel the effects of the loss of the iron fist of their Chief! 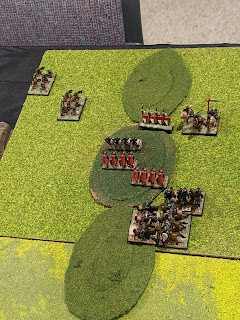 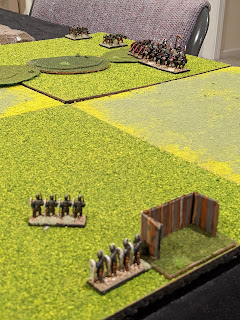 The Human commander pulled his few troops into a small line on the last hill, as a remaining Human Rider element was wiped out by the Orc Knights. The remaining reserve Human Blades could only watch helplessly as the Human commander became the only element left on the hill... 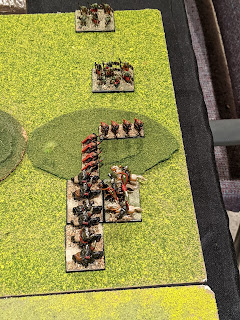 ... and then he was pushed off as well. The Humans fled the ridge, surrendering it to the victorious Orc force!

This was quite a fun battle! It lasted 32 bounds, but the time passed quickly. I really enjoyed how this felt as it played out. The limitation of what the Human commander could do with only 1 to 2 PIPs was a huge factor. The Hordes also made a big contribution, being able to come back and fill in the gaps, adding their influence by overlaps and preventing (mostly) flanking/closing the door maneuvers.

The loss of the Orc Warchief hampered the Orcs as well, or this would have ended a lot sooner, I think. It meant that, for the most part, my PIPs were halved as each move would take +1 PIP. The orcs were lucky I was rolling a lot of 5s and 6s.
Using HOTT with wargame scenarios from books The One Hour Wargame scenarios are written in a generic enough fashion that they can be used by other rules, but they are obviously tuned for Neil Thomas's rules from earlier in the book. To that end, I had to make several allowances to use this particular scenario with HOTT, as well as adjusting some of the rules of HOTT, here's what I did.

- No HOTT stronghold for the defender.

- No HOTT terrain generation - I used the terrain from the scenario as it calls for.

- This scenario called for 6 Blue units and 4 Red units. Using that ratio, I had Blue/Humans with a 24 AP army and Orc/Reds with a 16 AP army. I have random tables of army lists for both values, so I rolled for which armies to use.

For future scenarios, I haven't considered how to include the more fantasy-based units like Mages, Heroes, Clerics, Gods or Dragons yet, as NT's scenarios are decidedly based on non-magical encounters. I might try it in the future, just to see how it works.

The OHW rules are based on the assumption of a battle of attrition - once units come into contact, they do not break apart until one side is destroyed! Also, the scenario called that only TWO Blue/Human units could move/fight. I think that the turn limit depends on that aspect of the battle.

I decided to ignore the turn limit as well as the limitation of how many units could fight.  I ruled to have victory happen if either the Blue/Human side was convincingly forced off the hill OR if the Red/Orc side lost 11 AP (approx 2/3ds of 16).

- Reinforcements or Unit arrivals - I stick to the schedule as laid out in the scenario. I allow Hordes to be replaced.

- I implemented the "shambolic command" restriction of Blue only moving/fighting 2 units a turn via PIP limitations - Blue/humans could only get 1 to 2 PIPs a turn. I had all units in contact fight.

Overall, I was pleased with the results! I'm looking forward to doing more scenarios with HOTT.