Gaming at Little Wars in April!

Little Wars is the annual wargaming convention produced by the Historical Miniatures Gaming Society of the Midwest (HMGS-Midwest). It's a great time and very inexpensive too. $40.00USD for three days of great miniatures games of all types - can't beat that!

I'm the guy who usually runs fantasy games in the middle of a lot of historical gaming (Heh) and this year is no different. I'm running a game a day, starting at 11am each day. Here's what's on tap. 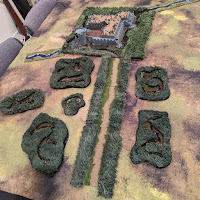 If you've been reading my blog for the past few weeks, you've seen the preparation I'm making for my GaryCon debut of this Greyhawk-related scenario. Set at the beginning of the venerable module T1 - Village of Hommlet, it sets up an RPG/wargame hybrid scenario. The picture to the left there is the model I've made of the Moathouse. I'm doing this same game at Little Wars

The blurb reads: A discrete summons has reached your ears, for the good people of Hommlet are in fear for their lives! A militia of foul brigands from Nulb have been spotted near the old Moathouse of ill reputation! What evil lurks there and beyond? Find out, brave heroes, using Chainmail (and a bit of Original D&D) 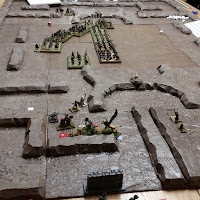 Chaos War in the Dungeon! - Saturday, 11am - Grand Ballroom Space 9

For the fourth year in a row, I'm running Chaos Wars at Little Wars! This year, I'm bringing some fun terrain and an interesting scenario - fighting a desperate battle underground! This isn't your usual dungeon crawl, this a dungeon BRAWL! 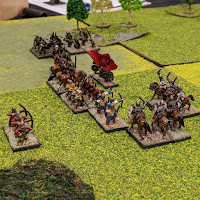 I've paid attention to the games being played at Little Wars and surprisingly, DBA and HOTT are not usually on the event list. This year, I believe that I'm the ONLY DBA/HOTT game there. Which will be great! I'll be bringing my 15mm Human and Orc/Goblin armies and letting players bash each other to pieces!

Here's the blurb: As the Orc and Goblin forces assembled on the horizon, the Human commander gazed nervously from the roof of her castle Stronghold. Would the forces of Weal prevail against the army of Woe? Find out with a fun game of Hordes of the Things set in the Etinerra campaign world. Wizards! Monsters! Oh my!

There's plenty of other great gaming to be had - some SciFi, a lot of historicals. This convention is usually how I scratch my historical itches, so that I don't go and buy a bunch of games and armies and end up never having time for anything else! This year, I'm playing in an American War of Independence game, An Axis & Allies Global game, and a Third Crusades game. And the dealer hall usually vacuums a load of cash from my wallet and credit cards as well.