The silence in the Council Chambers was so utter and complete that you could not hear a breath or heartbeat. Even the sounds of the seas, which provided a constant murmur of waves rolling in and out, seemed to grow quiet.

It was Marshall Hummil who finally spoke.

"Has the entire council gone mad?" he said incredulously. "Evacuate an entire city? When we haven't even started mobilizing for the siege?"

"The council appreciates your abilities and your loyalty, but it is clear." Council Elder Martin responded. "With the fall of the ducal city of Femo, there is only us and the city of Ancturin. The entire Orc army is coming at us and a siege will only result in two things - victory for them and death for us and our citizens. We would rather that we leave now. Flee. We will move up the coast to Ancturin. Perhaps there we can find respite and enough numbers to resist further... or perhaps from there, we will move on."

Hummil shook his head slowly. "Your honor, with all due respect, I intend on gathering my forces and resisting the Orcs. Not serving as shepherds to an entire city fleeing to another one, in some mad hope we'll find shelter. The Orcs can crush Ancturin as well, and if they approach, where do we go from there? No, the choice is clear. We must make our stand here, where we can fight and survive."

"We are going to send a courier to Ancturin to notify their council of our decision and to ask that they grant us shelter. But we cannot wait for a reply." Council Dame Natalia answered. "Which is why we will send the entire merchant and ducal fleet to Ancturin Bay. If they will not shelter us, we'll board those ships and sail south, perhaps to the Duchy of Pisces, perhaps to Southron."

"Madness." Hummil spat. "If it were not for my respect for this city and her people, I would have you arrested and tried! This is madness, this is treason against the Duchy and Kingdom!"

"Marshall, I don't know why we have to tell YOU this, but the Duchy is lost." Councilwoman Martha said in a gentle tone. She stood up, walked up to Hummil and put her hand on his shoulder. He stood stiffly and looked at her, his face etched with grief.

"With the ducal family dead, with the loss of so much land and life, we are virtually cut off. " she continued. "Most everyone has fled to Pisces or west into Southron or Regnum. We have a choice here, a choice to save as many as we can, or to sacrifice all in a lost cause. We choose Life."

Hummil looked around. The city council all looked back at him sadly. He could not deny Martha's words, as they were true. In his heart, he knew it. Hummil heaved a sigh and looked at his commanders lined up behind. They looked at him with varying emotions between shock, anger and acceptance. He nodded to them and then faced the council and saluted.

"The Armies of the Reach will do our duty to the end." he said. "If the council wishes to evacuate, then so be it. May the Light shine our way in this Darkness and protect our souls."
I've been running a couple of solo scenarios in my campaign world, alongside what the players are doing at the tabletop and online. The action has centered on an area of my world called the Duchy of Pisces and the Duchy of Dawn. Both of these areas are threatened by Orc and Goblyn invasions, Dawn suffering the worst of it.

In the book “The Solo Wargaming Guide” by William Silvester, the way decisions are made at key points (start of scenario, when new information is learned and new plans are required) are to draw up three plans and dice to see which is used.

The goals for the summer campaign in Dawn were for the Orcs to take the city of Reach, and the humans to survive. In creating plans for the human side, I came up with three possibilities:
Yea... no Battlestar Galactica inspirations at all for #3... nope, none at all. 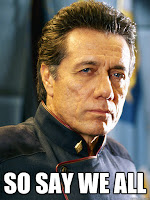 This is the part where I have to get vague, because the players haven't caught up "in time" to where I'm at in the wargaming portion of the campaign. They're at the beginning of summer and this battle takes place at the end of Summer. Due to how information takes time to travel across my Russia-sized continent, it might be a season before they hear in-game news from other Duchies.

Reach was evacuated, save for a small holding force of 5 companies of militia. The plan was that once everyone was away, and the orcs had settled in for a siege, the holding force would attempt to flee. Three orc armies (1 army = 12 regiments = 120 companies = 12,000 soldiers) surrounded the city and the companies fled... into the same space that an orc army had just moved into -- the northern road leading out of Reach. COMBAT!

To run this combat, I put the forces at roughly about equal size (rationalizing that the orcs wouldn't send a full regiment to crush a small group of companies), and I looked for a scenario in Neil Thomas's "One Hour Wargames" book (1HW) that would fit the bill. Aha! I found Scenario #13:


SCENARIO 13: ESCAPE SITUATION The Blue army is returning home after raiding Red territory. Its journey is blocked by a number of Red units.

Perfect! I grabbed my Pedion wargames terrain tiles, set up the board as shown on the map from the book. The road was a quick cut of some black fabric, as my Pedion roads haven't arrived... yet: 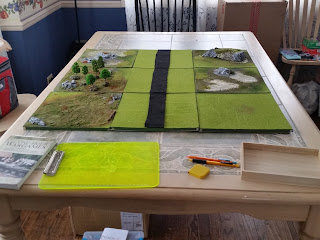 The belligerents - Blue Army (humans) - with 2 cavalry, 1 skirmishers and 3 infantry. The Red Army (orcs) with 1 cavalry, 1 warband and 4 infantry. I used the 1HW "Dark Ages" rules and random army selector. The Dark Ages set of rules and units fit closely to how I saw Orcs versus Militia/Levies working. 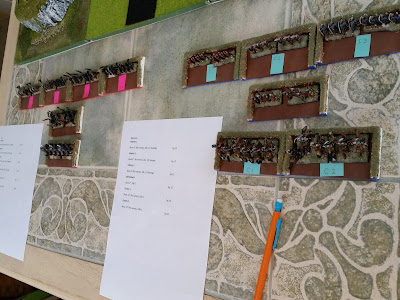 The scenario started with one lone warband (determined by die roll) facing the oncoming fleeing force of humans. The humans starting position was determined by die roll using a set of DBA solo rules as a guide. (Yes, I used the kitchen sink AND bathtub in this scenario...) 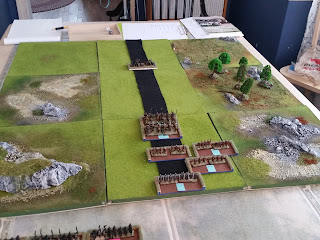 I also used a random tactics engine from that same DBA solo rules set to help guide what the humans and orcs would do. It gave me a good way of not letting my own bias and desires to get in the way of the scenario. So, for the first couple of rounds, the humans are playing it cautious and the orcs are totally defensive. Since the scenario calls for three Blue/human units to flee the board, the cavalry were going to split up and flank the motionless orcs while the skirmishers head to the woods and the infantry maneuvers to either go past or hammer the orcs. 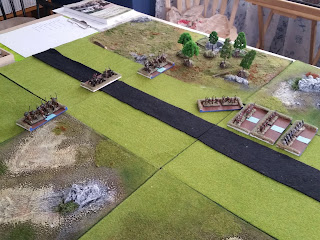 And then the Orc reinforcements come - a unit of cavalry and a unit of infantry. Since the orc tactics had turned "aggressive", the cavalry charged towards the humans while the warband clashed with one of the human cavalry. The other human cavalry turned around to possibly assist the infantry or see if more reinforcements were going to come. 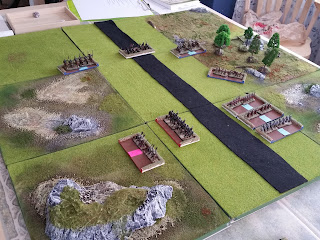 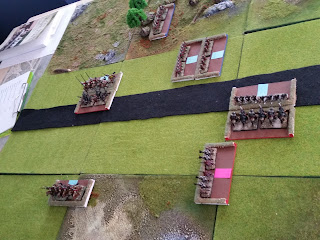 Then more orc reinforcements appeared and the orcs caught up with the fleeing human infantry. The cavalry and human infantry had caught the orc warband between them and crushed them, so the way was open! But now only the cavalry, skirmishers and one infantry unit had a clear route to escape, the other two were locked in combat! 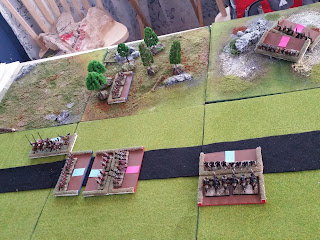 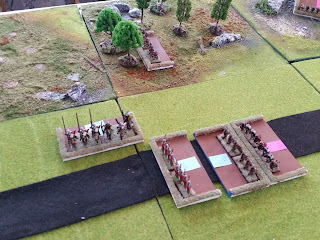 Deciding that survival and escape were the main goal, the cavalry and first human infantry unit escape off the board. With three units off, this means victory conditions for the Blue/humans side was met, but I wanted to play it out to the bitter end.

The skirmishers are continuing to pour missile fire onto the orcs in a vain attempt to save the flanked human infantry, but they are keeping an eye on the third reinforcements which have just appeared (the lower left of the below picture)

I should also note that the location of appearance was randomly determined (using the Solo DBA rules) and extremely critical. The second human cavalry unit was close to the edge and had the orcs appeared right in front of them, they might not have escaped! 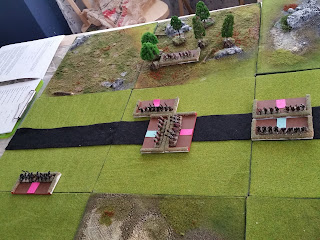 Upon seeing the human infantry unit nearly destroyed, the skirmishers in the woods decide discretion is the better part of valor and running away to fight another day is a perfectly acceptable option for victory. So, using their greater rate of speed, they flee the woods. The orcs do destroy the unit, but the skirmishers escape before the orcs can turn around and give chase. 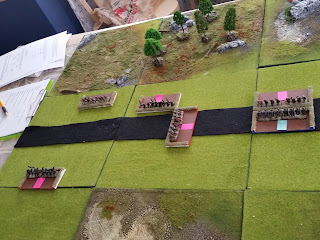 With no help coming and no avenue for escape, the final human unit is crushed by flanking orc infantry. 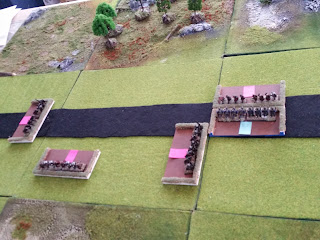 The surviving humans group up and continue to flee to the city of Ancturin, hoping to meet up with their fellow Reach city mates further along the road. 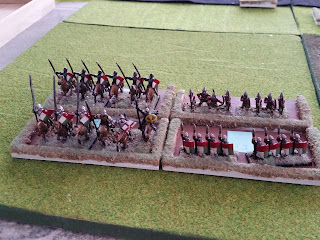 Some final thoughts about One Hour Wargames and how this all plays out...

It really was a one hour wargame. A little less. The abstractness of the units involved was good but I could feel the differences in the units in movement and combat. I liked it!

Maneuvering and position in 1HW is extremely important! Since units "lock" in melee until one side is destroyed, this means that you can't count on morale or recoil or even retreat to be an option. You throw a unit into melee, you have to be willing to see it lost. Since I had to save half my force, using the infantry to tie up orc units, while the faster cavalry and skirmishers escape made the most sense.

The simplicity of the 1HW rules left me to just make assumptions. Could a missile unit fire into a melee? I ruled yes. Should you "square up" if the units don't touch exactly? I ruled yes. If I want to turn 90 degrees, is that my whole movement? I ruled yes. Other than that, it was pretty straightforward and fun!

I also liked sticking in a random element to the tactics. It was a bit harder to interpret "cautious maneuvering" versus "defensive maneuvering" so I used my best judgement based on what I would do if I were a commander looking to achieve XYZ, but I'm feeling aggressive/cautious/defensive. I think I might update that to not change it every round, as the "mood" varied widely from round to round.

All in all, I am very satisfied with my "kitchen sink - everything in the pot" approach towards this game and how I conducted it.

At the end, the orcs, having lost, have three possible plans they can now follow with regards to what they do about overrunning Reach:


Roll of the dice to tell the story... and I'll pick that up at another time. :)