Campaign: It is the Last Age of  Homo Sapiens on Earth, a dying world long sucked dry of its essence and resources by countless millennia of generations. Thousands of years ago, the bulk of human race left, leaving behind civilization in ruins; those left began to plunder and pillage, setting themselves up as kings and queens fighting over the leftover scrap. Now even those remains are dying off and falling apart; with the remaining population looking for ways to leave themselves, if possible anymore.

Homebase (Hex 0) (0101): Eclandria - The decaying city of the Nine Queens, once the pinnacle of humankind's achievements, with spires that reached up nearly into space, then fought over by countless factions after The Exodus, now a shell of ruins and farmlands interspersed among rebuilt edifices and smaller towers. The few remaining Servicers continue to attempt to repair themselves and other bits of technology, while the Defenders rust and rot, allowing raiders steal away what remains of the wealth of the city. The remaining Queen has devoted all of her resources to recovering enough technology to repair the last of the Great Silver Arks, but time is running out as energy cells fail and her educated Thinkers die of old age. 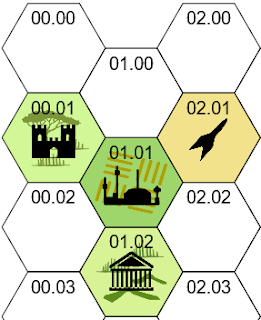 Location 1 (0001): Ordrung - Once a massive facility for a long forgotten military unit of the Before times, this fortress is now home to a barbaric, vicious band bent on a final victory. Their kidnap raids on Eclandria has led to the capture of many of the young children of the city now serving as slaves of the gang. Several Eclandrian rescue teams have instead supplied the thugs with updated equipment and a Servitor, which they're now using as a guardian wandering the area around the crumbling edifice.

Location 2 (0201): Capcanav - Festooned with bright banners, tents and dozens of aged humans, the ancient starport also hosts several decayed hulks of spaceships - the Great Arks. The Elders hold daily meditations and rituals in worship of "Those Who Have Gone Up", believing that the long-gone travelers have become gods and will return if humanity is humble enough. The Elders are dismayed at the Eclandrian attempts to repair an Ark and are trying to raise an army to resist them.

Location 3 (0102): Alexindia - The Library of Knowledge and Death is contained in a vast maze underground, full of strange flickering illusions that speak in long-lost languages, crystal discs said to contain forgotten knowledge, and strange metal cabinets full of decaying material. A cult of priests has made themselves guardians of the knowledge, believing that they must die in order to understand what is contained within the archives. On a regular basis, they commit suicide (or kill each other) and resurrect/revive the dead in order to perform a "learning".