Campaign: The Night of Horrors saw the city walls fall and the Necromancer's unliving pour within, killing and destroying all that they could find. The great warrior Gojun of Palandrin, forewarned by the Goddess of the tragedy, organized a rear guard that held off the ravaging hordes long enough for a great caravan of refugees to flee. Now, cut off from the Inner Kingdom by the unliving, the exodus of refugees seek to find either a new home or a way to get back to safety, pursued by the hordes and Namouti the Necromancer seeking to add to her Army.

Starting Location (0000): The caravan of refugees includes craftsmen, merchants, city leaders and laborers, all with belongings as well as their own baggage of prejudices, problems and expectations to lay before the feet of Gojun. A governing council attempts to navigate the many differences and needs of the refugees, while growing more desperate for scouts are needed to look ahead for safe paths, scavengers who can find desperately needed supplies, guardians who fight to stave off attacks by the Necromancer's pursuing forces, or adventurers to seek assistance, whether it be artifacts or allies, to help! The refugees have mired themselves in the Dank Fens and the attacks by lizardfolk, alarmed at the perceived invasion of humans, are starting to take their toll, as are the attacks by the skeletons of the Necromancer, led by the Great Black Wraith! 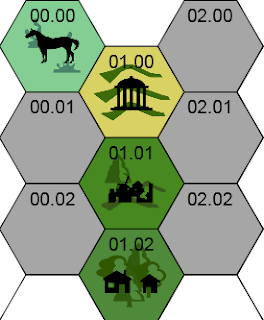 Location 1 (0100): Shrine of the Trident - In ancient times, the The Trident of Skain was buried in these hills and a shrine constructed over it for those who joined the cult which guarded it. This mystical weapon may be strong enough to destroy Namouti the Necromancer if heroes can be found to fulfill the quests to open the Golden Sepulcher. What the cult has forgotten is the terrible price that the Trident exacts from its wielder in exchange for the power that it possesses.

Location 2 (0101): The Ruins of Christop - It is not hard to find the long lost city whose bones jut from the sides of the lightly forested hills, although the goblin and orc tribes that have surrounded it may make it hard to approach. It is a tempting destination for the caravan, as there is enough rubble and wood to build shelter and begin construction anew! The ghosts that inhabit the hills reenact their long forgotten horror on moonless nights, and the surrounding tribes know that those spirits will steal souls of those they find within the city limits.

Location 3 (0102): Foyge - The welcoming village of Foyge, full of dwarfs who mine beneath the huge pines, is a welcome respite for the caravan, providing food, shelter and a rest from the depredations of any of the Necromancer's forces. Clerics and paladins of good will find that their spells and powers are strangely muted, although they can't quite understand why; conversely, those who may follow darker paths will find their abilities slightly increased. The deepest tunnels of the mines harbor a dark secret that will cost the caravan a great deal, for the vampires that control the dwarfs live here and await the fresh blood that has willingly come to their doorstep!


With this setting, I'm doing something different - there is no homebase! Rather, the homebase moves with the PCs.

Now this is obviously inspired by Battlestar Galactica, but I also played a similar scenario in a LARP back in the early 1990s in Indianapolis - it was called M.Y.T.H. (Make Yourself The Hero) and it was great fun! I can honestly say that I've ran a LARP in a real cave system (4 rooms) and it taught me a lot about light sources and the difficulties of combat in such an environment!

This map may feel a bit like a railroad, but remember that the main goal is to get the campaign started and keep the players moving! Of course the refugees want to settle down somewhere, anywhere, but is it safe? Is it possible? As you expand on this campaign, you can present more red herrings or possible solutions - hopefully each with a choice of "is the grass green enough here or should we go there?"

If I keep thinking about this, I'm going to want to run this campaign myself!
"Three Hexes" are simple campaign starters to show that you don't need to do a lot to have interesting settings for people to play in. Feel free to use these in your game, campaign or as ways to spur on your own creativity and imagination!