My Players' Homework: One Page and a Wiki

Some great discussions at Necropraxis/Brendan and Nine & Thirty Kingdoms/Talysman (John) about how much a player should know or have to know to come into a campaign.

This has been a great concern of mine as well, as I run a West Marches style campaign that is pretty open to new folks! I see about 2 to 3 new players a year, as other players rotate in and out, depending on life and interest. These folks need to see something quick and easy to get them into their first game, but also something with depth for further knowledge!

Same is true for long-time players. They've accumulated quite a bit of knowledge and have encountered many different things. I don't want that information lost or hoarded in private journals or my notes.

I also see quite a few new faces at games I run at conventions! All of my games take place in my campaign world, so having something quick and dirty for their use is important - most folks at con games don't want 20 to 30 minutes of campaign backstory, they want to get to the scenario!

My solution is to have two resources - a one page handout for my campaign, and a campaign wiki. 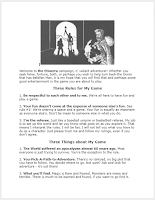 One Page Handout - I've used this pretty much as-is since I started the campaign. At its core, it tells the player the basics of what is going on, what to expect and (hopefully) a feel to the campaign - serious, but not TOO serious.

I have a stack of these for conventions, and I give the link to people interested in the campaign. I think my last few players, I neglected to do that! Because of the ... 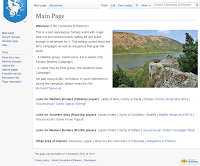 Campaign Wiki - My campaign wiki also started in 2009 at Obsidian Portal.[1] and I ported it to a private site last year. Over the years, it's been a collection of information that I provide that is common knowledge, a place for me to track things and a place for players to share what they've encountered (The Adventure Logs).

Some areas are far more described than others, and this is primarily a labor of love for me. The players, by and large, haven't done too much editing, but they are always welcome to, and I find it goes in fits and starts.

This, though, gives the depth of lore should someone really want to do homework and investigate my world.

As a DM, I want people to hit the ground running, but to dive in as deep as they want. That's why I have tools for both.

[1] My Obsidian Portal wiki is still up, just not maintained anymore. I have used a web copying tool to get to the old adventure logs, but it would be difficult to copy them over to Wordpress. Why did I leave OP? The site has not been well maintained over the past few years. It feels like this is a site waiting to be shut down. I'd rather have the fate of Etinerra in my hands!
Labels: Chronicles of Etinerra campaign