[Three Hexes] The Haunted Seas of the Greybeard

Campaign: The once-peaceful waters of the Cyrene Seas now are known as the Haunted Seas, as the once-defeated Dom Cruelo's ship, the Greybeard, has risen from the depths of the ocean to wreak vengeance on the ships and towns along the coast. Towns and farming villages along the coast have come under siege by hordes of undead, and Dom Cruelo's force grows larger from the victims of his deadly attacks. Both pirates and mercenaries are flocking to the area, drawn by conflict, by the infamy of the pirate and the rumor of vast hordes of treasure to be found somewhere in the area.

Homebase (Hex 0) (0002): Davidstown - This small fishing town is living in terror of the predations of the Greybeard as it wreaks havoc along the coast with raiding parties of the unliving: zombies, ghouls and worse. Hizzoner Huford has hired mercenaries to either escort the women and children away or help supplement the small guard force. The town's cleric hides a dark secret from all, he is part of the cult that has brought the Greybeard back, offering the town inhabitants to the ghost of Dom Cruelo in worship of the horrible god that has given life back to the pirate. 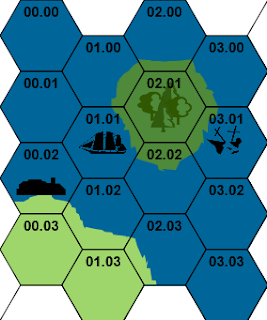 Location 1 (0101): The Pirate Ship Graybeard - This infamous ship is festooned with the umbra of foul magics, gaping holes in its sides and the debris of being under water for forty years. Undead litter its deck and rigging, tending to rotting rope and sails, when they are not viciously attacking any ships or settlements nearby. Those who approach the ship will need the blessings of their gods to counter the oppressive dread that emanates from the foul pirate captain, Dom Cruelo, who stands at the sterncastle of his ship.

Location 2 (0201): Red Jim's Point - A small, heavily forested island, the site of the battle between the Greybeard and Intrepid that sent both ships to their doom; it is also the site of a long-forgotten temple of evil to a malevolent god. Dom Cruelo's treasure lie in the catacombs of the temple ruins, along with an altar that has given unnatural life to the pirate and gives power to the risen ship. Unless pure of heart or bolstered by an opposing god, all who approach the island in search of the rumored treasure may fall sway to the call of foul deeds and become a member of Cruelo's navy!

Location 3 (0301): Wreck of the Intrepid - The once-proud ship of the Royal Navy lies shattered at the bottom of the ocean, but the blessings of the Divines still protects any of good heart who approach the vessel. The mermen/women of the depths gather here to tend to the underwater garden that has sprung up around the body of Sir William, who still bears the mystical holy sword Bishop's Wrath. A lone ship, manned by the mad monk Zazul, floats above and his keening cry echoes strangely across the water, scaring other fishing ships away.