Did you play the first three Ultima games?

I'm talking about Ultima I: The First Age of Darkness, Ultima II: The Revenge of the Enchantress and Ultima III: Exodus. These are, to me, the fondest nostalgic memories of my first CRPG experience.

If so, or if you played any bit of Ultima and wondered what it would be like to adventure in Sosaria in a tabletop RPG...

Back in 2009, I took the Swords & Wizardry White Box Word document, my love of Ultima and a lot of reading of various Ultima wikis, game manuals and came up with this: 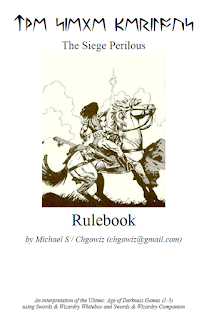 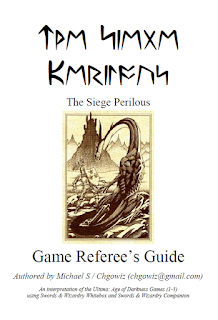 I called it "The Siege Perilous" (images and link goes to page where you can download the rules) and it was my love letter to Ultima and an attempt to start a campaign based on a Sosaria at war at the beginning of Ultima 1. It was a way to open up a sandbox in a known setting. And then... for nine years, it's sat relatively unplayed.

I've ran it a handful of times at events and the game has gone over fairly well. It's based on OD&D, the simplest and most open of the various versions of Dungeons & Dragons, tweaked and modified to fit the Ultima world. There are *gasp* spell-points based magic rules! Naval combat! Outer space combat!

So I've been thinking about running a game on Roll 20 and Discord. And it occurs to me that this would be a perfect opportunity to run my Ultima RPG!

Are you interested? Do the war horns grow louder and you feel that you must heed the call, brave adventurer? Let me know in the comments, or email me at chgowiz@gmail.com and let me know!