Back from GameHoleCon - it was a glorious weekend of gaming, surprises, seeing some history and having fun! 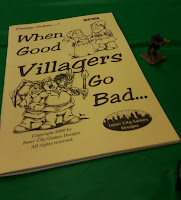 Basic idea is that chaotic adventurers come into town to loot, burn and murder. The villagers don't like that. It's a race to see who racks up the points quickest - villagers in running out the ruffians on a rail, or the murderhobos in getting that fat loot and offing townies.

ThePrincessWife loved the sound of the complete chaos that this game descends into that she asked me to pick up a copy, so I did. Only $7!

My next game was with Tim #$%^!#$ Kask! This time, it was to be a Sea Vikings game. I wasn't sure what to expect, some sort of cross between a raid and plunder game, or an all out Ragnarok style game. When Tim arrived, he had some printed sheets that he said came from a magazine article that Gary wrote at some point. They had various rules on grappling, ramming, shearing oars. I was stoked! (I didn't think to ask him which magazine or when, so if this rings a bell with you, please tell me in the comments!)

Except the game we played was pretty much none of that. We had to come with "four signals" and that's all we could use to communicate with each other. At that point, we "sailed" towards each other, rowing away, closed and then... we automatically grappled? We started rolling on a chart to see if we won battle or not. Then... that was pretty much the game. Move a bunch of paper longships towards each other, see if we beat the other crews or not. The game was over in maybe 30 - 45 minutes. Meh. 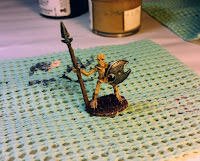 I reclaimed my time and went over to the Paint-N-Take folks. These people are great! They run this at many conventions that I attend, and it's a fundraiser for the Wounded Warrior Project. These folks have a bunch of Reaper Bones and other donated figures mounted to bases. You grab some brushes that they provide, sit down at a table full of donated paints and paint away! 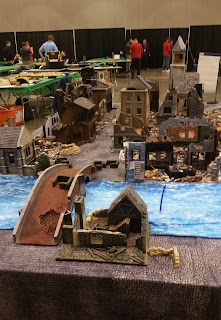 Saturday, I played in a four hour recreation of the final battle in Saving Private Ryan - The Battle at Ramelle. You know, the one that has that gut-wrenching scene where the German soldier fights a knife fight with Private Mellish. Yea.. that battle.

Steve Fratt, the president of HMGS-Midwest (Historical Miniatures Gaming Society) put out an amazing table for this! He had the main area of Ramelle almost perfectly laid out for a 54mm scale game. The set up was that the Germans would move on the table. The Americans, who were hidden, would move on a separate board that the German players could not see. Once the Germans had line-of-sight, then American figures were put on the table.

It takes a special sort of game to suck me in and get me extremely emotionally involved, but Steve's game did just that. We were 16 soldiers with various equipment versus 60 SS, 2 Tiger Panzers, 2 halftracks, 2 self propelled howitzers and a 20mm gun. My fellow American player and I executed a patient game of hide and seek, sucking the Germans into kill zones. I killed three armor with my rolls and for the first 80% of the game, we had the Germans confused and reluctant. When their last tank came in, they started using good strategies and we had to fall back. It started getting very ugly for the Americans. 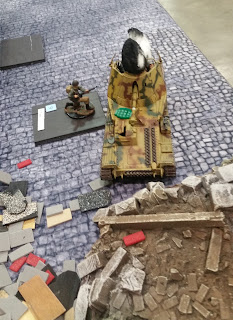 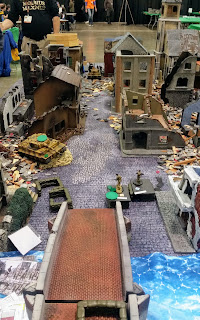 The game ended with the Americans in a last stand defense against a wounded tank. The players, we were exhausted! It truly was a lesson in urban combat and squad style tactics. I learned more about WW2 in that 4 hours than I could have possibly done by reading it. My hat's off to Steve for an amazing set up and game. If you have the chance to ever play this with Steve, do it! It's worth the time.

My Saturday afternoon was spent with David Megarry (with two Rs!), who is the designer of the classic board game Dungeon.

What a treat! He gave a 20 minute talk about how he started the game. I have to work on the video that I took, the audio is kinda poor, but it was a fascinating story of how the game came to be, and a few insights into the inner workings of early TSR, especially their quality control as they kept misspelling his name on the board game itself! If I get the audio cleaned up, I'll definitely post the video, David gave me permission.

He brought several copies of the 1970s printing of the game, where you put the game cards on the board itself. We gathered into groups of four and proceeded to have tons of fun playing. I managed to win with my SuperHero!

Saturday night was my AD&D game. I have to tell you, this was a game that was going to succeed wonderfully or fail gloriously, I had no idea! I can do dungeon delves all day and hexcrawls are easey-peasey, but an in-town adventure? I wasn't too sure how this would end. Especially since I had waited till the last minute to get my act together.

Fortunately, my DM-fu skills are still up there and the session went off in awesome fashion. From the opening act of non-undead rage zombies crashing through the window and door of Ye Olde Inn (in a halfling city!), to the decision and vote-off between players on whether to leave town or save it, to almost/not-quite killing off several players and the finale where they managed to save the town from burning, but watching ships sink in the harbor from a crab-people attack. Choices have consequences! 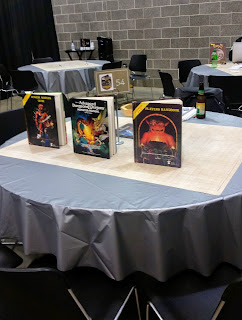 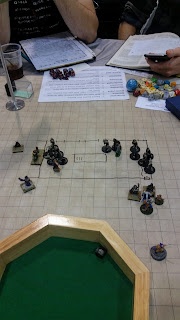 Sunday morning was the finale for me - hosting a Ral Partha Chaos Wars game. In this game, I recreated some history from my campaign, where Marshal Constantina's besieged soldiers abandoned Upland Hold and fled from the Orcs and Goblins. It was a lightly attended game, which is a risk on Sunday morning, but we had a lot of fun! The poor human player could not roll well to save his life and the Bestials won the day. 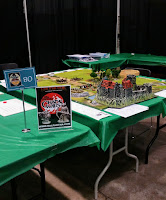 What was spooky was that in this battle, a very strong human unit did look to be able to escape the battlefield and the Marshal was about to die in combat when we ended. An almost exact recreation of what I had determined happened when I wrote the history almost ten years ago! (Insert Twilight Zone music here...)

So my first GameHoleCon ended. It was a fantastic event! Very well run, I had no complaints at all. I did not stay at the nearest hotels, they were sold out. I was about 15 min away at an inexpensive Econo Lodge.

I highly recommend you check this out if you're in the Midwest. It's usually the first weekend in November. See you there next year!