Ambushes! Book of War to the Rescue! (or How Players Make My Campaign Better)

Back in October, the players in my Etinerra campaign ran into an ongoing skirmish-ambush by roughly twenty Goblins. Nasty little buggers, those goblins, as they used cunning "scoot and shoot" tactics to pick away at the players. It kinda ended up looking like this:

Anyway, on the campaign email list, a player kicked off a discussion of how the ambush seemed to bog things down. Not that they objected to the idea of being skirmished against, but that pausing to roll the individual rolls seemed to slow things down - who hit, who missed, what was the damage taken. It was a great discussion with some ideas like:


I asked the players what mattered more to them in these sorts of situations where they might be outnumbered and the feedback was overwhelmingly that they wanted to keep the game flowing, even if it meant that results would not be as precise as individual rolls.

Then it dawned on me, I already had the answer to make this simple and quick and, most importantly, consistent with D&D. The answer was within my copy of Daniel Collin's Book of War! 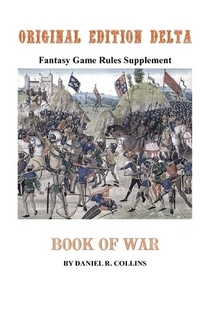 This little book creates a D&D-compatible skirmish game at a 1:10 scale where 1 figure represents 10 combatants. Daniel writes Delta's OD&D Hotspot, where he dives deep into the original version of Dungeons & Dragons, especially from a statistical perspective. It's a great game and I've used it to incorporate mass combat within my D&D games, switching back and forth within the game.

So, Daniel handles combat with essentially one d6 roll versus a number based on the Armor that the target wears. So, based on that concept, I developed this rule for all future ambushes and skirmishes where many figures are opposing the party:


For each ten shooters, I roll 1 six sided die.

If there are less than 10 shooters, depending on the situation, we might go to 1:1 rolls, or I would apply penalties to the single roll for hit and for damage.

I will roll 1 die appropriate for the missile used. All those hit take that damage.

The players all approved and so off we go for the future.

Sometimes, wargame approaches work out pretty well. Simple, quick and it will get the point across that players better grab some cover or find those skirmishers ASAP!

What was really nice was having a good result based on player feedback and input. I think most of you probably already do that, but if you're just starting out, it's always good to encourage feedback and show that the feedback matters. I didn't end up using the suggestions as presented, but they nudged me towards a great solution that was already there.

If you're interested in how I mix normal 1-on-1 D&D with mass combat, here's a blog post about it:
https://chgowiz-games.blogspot.com/2015/12/my-holy-grail-found-mixing-mass-combat.html

Here's the rules I wrote for Book of War on how to put PCs into a mass combat:
Book of War Supplement: The Fellowship.
Labels: Chronicles of Etinerra campaign dark ages campaign