Etinerra Lore - The Horrible Source of the Eye Tyrants

Ever heard of Basil Wolverton, the cartoonist? I hadn't until early last week, when Grand DM posted this picture on Twitter. 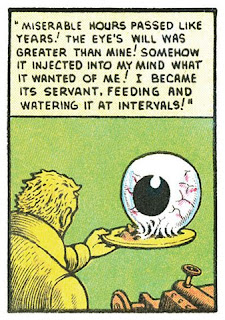 This lovely image is from a comic released in 1952 by Marvel under their Mystic series - it was called "Eye of Doom". Give it a read, it's pretty creepy, by 1952 standards!

However, since I steal liberally from all sources, the following is what that image inspired in me ... the source and reason that Beholders exist in my campaign!


Summer 23, 945th Year of the Kings
I have done it! I have finally translated the works of the famous mage Fyce Oe'too! At last, the spells and writings that he left in that forgotten tower are mine. This is what I've worked years and years for. Master Kelix, afraid of my power that I had come into, tried to scare me with childhood nightmare stories. He was once my teacher, but I have long surpassed him and this was just a vain attempt by him to keep me away from real power and spells of ultimate value!

Oddly, Fyce must have gone mad at the end of his days, for his writings became more erratic, disjointed. It even looks like he tried to destroy some of his works, judging by the scarring on the pages, but he ensorcelled them well and they resisted. I will take precautions.

One of the spells I intend on casting is "The Familiar of the Eye." The spell hints at a creature of some power, much more advanced that the simple familiars that we all know of. Such a familiar would serve me well as I work to learn and understand the rest of Fyce's spell. It does require many eyes of various creatures and the blood of humans, elves and littlelings, so I will be busy for awhile.

Winter 19, 947th Year of the Kings
My disappointment is difficult to maintain! After countless ten-days of travel, much gold spent on mercenaries and adventurers, a season of preparation and all I have is a limp, lifeless eye sitting on a gold plate! It is useless! It barely responds to my commands, it has no abilities that I can discern and not to mention all of the eyes I provided were all absorbed into one huge eye. The spell notes allude that one must wait several ten-days for maturation, but unless this thing changes in ways I can't imagine, I don't see how this will be useful!

Winter 36, 947th Year of the Kings
The eye has indeed changed! A chitinous shell has formed around the eye, with a large mouth forming at the bottom and the actual eye somewhat shrinking into the body. Several smaller, flexible stalks seem to be growing out of the thing.

More importantly, this thing is starting to show intelligence and arcane abilities! While it still cannot do much, I am sensing that it understands me. I've also seen it looking at my spell books! It clearly is attracted to items with magical properties. If nothing else, I have something that can find items of interest for me.

Winter 59, 947th Year of the Kings
It has a name! I was astonished this morning when I commanded it to fetch me some items using it's newly discovered power of telekinesis. "My name is Q'lyth!" it said - and it's voice actually projected a hint of petulance! While this creature shows promise, I do hope it doesn't develop will and intent outside of service to its Master! I would hate to have to punish it or destroy it.

Sadly, I am afraid I may have to lower my hopes for one of my best pupils, Toby. He had shown such promise up till now. He had even expressed an interest in helping to train the creature... Q'lyth, I guess I use its name. In the past ten-day, though, Toby has shown severe regression in his studies and abilities. It happens sometimes - one will reach a crucial point in their training and then they cannot progress. Still, his absent-mindedness is worrying and I am troubled to find that he might have been stealing from my components!

Spring 2, 947th Year of the Kings
Q'lyth has eliminated several assassins with a power that I had not known it possessed! These assassins had come in the guise of merchants with items that I had been seeking for some time. Q'lyth, who has become my most invaluable servant and student, warned me that they were not who they seemed to be. It seemed to expect me to also have this knowledge of our guests, although I did hide my surprise from it. Once the assassins made their move, one of Q'lyth's eyes projected a power that caused the assassins to die a horrible death, screaming as their insides melted. Once again, I hid my surprise.

After Q'lyth went to his classes to train the apprentices, I researched what power it had used. Death magic is not for the lower class mages and this ray ability is something that I must understand. It occurs to me that Fyce's writings had hinted at such things but not spelled them out. I'm curious why he was not as thorough of documenting the eye familiar as he was with his other spells.

Spring 39, 947th Year of the Kings
Q'lyth has charmed my students! I happened to cast a dispel enchantment in the area that Toby was standing and much to my surprise, he came out of the spell! Apparently, Q'lyth has had him under its power since mid-Winter. What I had thought was a limit to my student's power was actually a sign that he'd be bespelled! Toby told me that Q'lyth has also systematically charmed my other students. It has been studying my most powerful books while I am away or asleep, having easily broken through my various enchantments and charms I had placed on them to keep apprentices out.

He does not know what Q'lyth's plans are, but apparently this creature has reached a point where it feels that it does not owe me any allegiance. No wonder it has been willing to train the students - it's creating its own school from within mine!

Spring 43, 947th Year of the Kings
Q'lyth has found out that I know of it's charming ability. It's response? "You cannot stop me, Askari. I know of your powers. You now know of mine. Together, we can do great and terrible things, not as Master and slave, but as equals."

It then attempted to charm me! I was able to easily resist, but the sheer arrogance and malice of this monster within my own school is astonishing!

I am unsure of what to make of its offer. On one hand, Q'lyth shows amazing abilities and understanding of arcane matters. On the other hand, how can I trust it? I feel trapped within my own tower!

Summer 8, 947th Year of Kings
I am writing this last entry and then hiding this journal. Master Kelix and his thrice-damned riddles! If only he'd been clear in his warnings to me of these creatures. Q'lyth has become a tyrant! I see now it  never considered me an equal, only a means for it to reach power. Since late spring, it has tried almost daily to overcome my defenses and dominate me. It has openly usurped my position as Master to my students. One poor student resisted and its eye stalks cast a spell, turning the poor girl into a statue!

I fear that I have unleashed a monster onto the lands that I cannot control and may not be able to remove.  I no longer have my wands or staff, Q'lyth has remove their power from a force projected from it's main eye. It has taken many of my spell books and has had the students rewrite them, destroying the originals! I am studying the few books I have managed to keep hidden in hopes of finding spells to kill it.

I hear many footsteps on the stairs of the tower. I fear that this might be the final confrontation; it has brought my students to betray me.

If you find this, do not cast the "The Familiar of the Eye" spell! For it will only bring forth not a servant, but an Eye Tyrant! 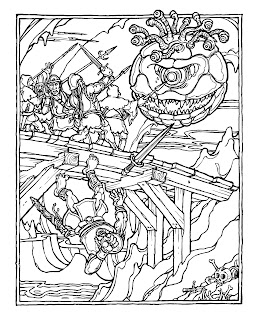 (Picture is from the AD&D coloring book)
Labels: Chronicles of Etinerra campaign D&D