I started this series to explore the updated release of "Chaos Wars", a set of miniatures wargaming rules by Ral Partha. In Part 5, I introduced the rules for Creatures and Fantasy Troop rules. The creatures were quite the wild card, and the loss of the Orc Leader to a creature made all the difference in giving the Humans the victory.

In this post, we're going to add two last items: "Magic Spells" and "War Machines." With that, we'll have done the vast majority of the basic rules for Chaos Wars. There are other odds and ends that I might write about later, but for the most part, I can now play a lot of wargames with what I've learned over the past couple of months.


Magic can be quite the unbalancing of a war game. Ask anyone who has somehow incorporated the D&D spells into their wargames! Chaos Wars does introduce some magic, but when going with the "Common" and "Offensive" spells only, they end up being more additive to the existing units, than allowing mages to become nuclear devices.

There are several types of magic: "Common" and "Offensive" are basic spells, giving you 16 spells. Additional spell classes exist: Elemental, Illusory, Summoning, Clerical/Priest and Necromancy/Demonlogy spells, giving you an alternative 35 spells to play with! There is also a "Counter Spell" spell, which allows a mage to reduce the effectiveness of an incoming spell.

Yep, this scene from Conan can happen!


When you include magic, you include a new Event into the Turn structure, which makes it look like this:

Spells are announced first, in a "my turn, your turn" initiative order. Once a spell is declared, a "saving throw" called Magic Defense is rolled if required, based on the target's Magic Value. This allows the target to reduce the power of the spell.

Spell casters can cast only one spell and can put more power into the spell than it costs. This allows them to overcome magical defenses or Counter-Spelling. If a spell's power is reduced by defenses or countering to below its cost, the spell has no effect!

Spell casters can half-move and cast. Their range is pretty long, 12 inches plus the level of caster. Spells go off simultaneously, and damage from spells will result in a morale check.


War Machines encompass quite a few different types of vehicles and weapons - from ballistae to catapults, chariots, war wagons and even war altars.

Since I'm most concerned with Artillery, I paid most attention to these rules. Artillery are considered crewed, and if they fail Morale, the crew runs away until they are rallied and can come back. They fight and defend as Creatures, but check morale as Yeoman Infantry.

There are some fiddly bits: Artillery suffer double damage from melee attacks. but when attacking, they lower the Armor Value of their target! They cannot split move/fire. They cannot be targeted by friendly spells.

Engines, such as chariots, blimps and sky ships, are pretty cool. You can mount artillery on some of them, have them pulled by creatures/monsters, have them carry infantry and other fun bits. War Altars are religious or arcane relics that are attached to units and mostly provide morale/melee bonuses while also doing a bit of melee attacks itself.

Let's see how this works in combat


We have our usual band of suspects, along with leaders and creatures, but now we're adding a spell caster and war machine!

I'm using the same scenario as before. Humans protect the village against a Bestial raid. If the orcs occupy the building or reduce it to ruins, they win. Humans win by preventing that from happening.

My Bestials now are all Ral Partha orcs and goblins, except for the horse-mounted orcs. I've been doing a LOT of painting over the past few weeks. Below are the three units most recently painted. 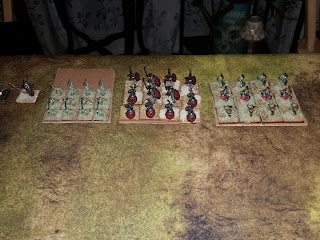 Before I started the game, I rolled for the "disposition" of each force. It's a mechanic in my wargames campaign rules to randomly determine how each army approaches each other: Aggressively, Cautiously, Defensively. The Orcs were aggressive, the Humans cautious. The orcs were going to jump to attack every chance they got, while the humans would maneuver for best position. 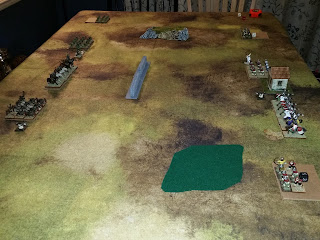 Turns 1 and 2 saw maneuvering for position by both sides, as the orcs rushed forward and the humans braced for the attack. In turn 2, the Human Mage cast the spell of "Enhanced Mobility" (aka Haste) on the militia flankers to prevent the lesser goblins from getting around the hill. Meanwhile, the human men-at-arms sized up a troll, the Rock Lizard savaged the Orc Warriors and the cavalry charged each other.

The bolt throwers also launched ranged attacks across the board, scoring hits. 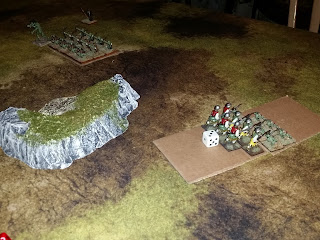 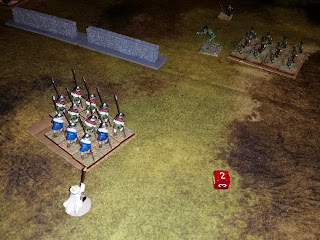 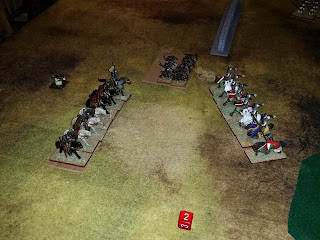 Turn three saw Rocky the Lizard fall to the Orcs, although he took quite a few with him! Only 3 of the original 12 figures were left. The cavalry were locked in melee, neither side breaking. The Orcs aggressively sent the Troll after the archers, and the Human men-at-arms, despite taking heavy losses, routed the Goblin Archers.

Magic played a part in this turn, as the Orc Shaman hasted the Troll to get it closer to the archers and building. The Human mage enchanted the human men-at-arms' weapons and fortified their armor, which was the difference in the melee. 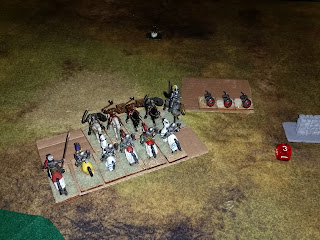 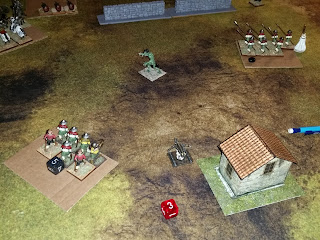 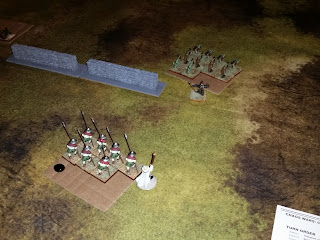 The human militia finally sent the lesser goblins packing in Turn 4. The missile fire from the Bolt Thrower and Archers slew the Troll. The Orc Shaman cast the Rally spell on the Goblin Archers, returning them to the fray against the human men-at-arms. The human mage sent six points of Hellfire at the Orc Shaman. Needing 5+ to hit, I rolled ZERO hits on 6d6!

Meanwhile, the human cavalry get flanked by the remaining orc warriors and the casualties start mounting. Still, neither side breaks, remaining locked in combat. 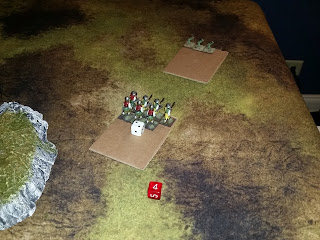 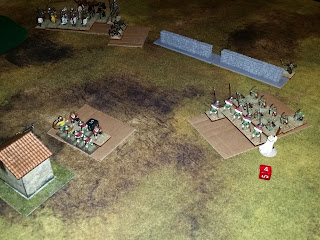 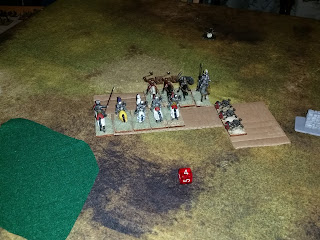 The human militia moves to aid the men-at-arms, and the cavalry continue to savage each other, neither side giving ground. 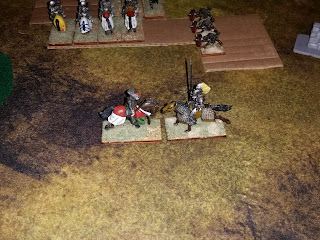 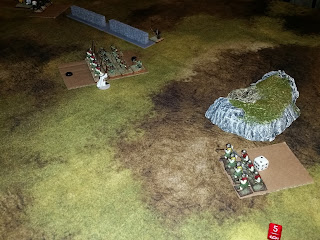 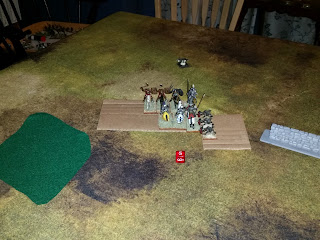 Turn 6, the mages get serious with spells. The Human mage sends six points of Hellfire at the Goblin Archers. The Orc Shaman counters 3 points of it, and casts Fear on the Human men-at-arms! The humans make their morale check, but the Goblin Archers flee again from losses to the spell. Orc Army Commander duels the Human Commander again. Still an indecisive battle, although the Orc is landing more hits than the Human. The cavalry finally crumble and are defeated, leaving the human commander alone in the battle. 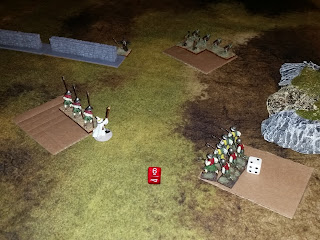 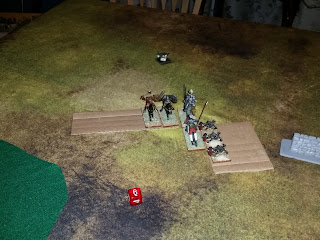 Turn 7, the human Army Commander refuses the challenge, as there is no penalty since his attached unit is destroyed. The Orc Mage attempts, once again, to cast Rally on the routed Goblin Archers, but the Human Mage, being in range, counters that completely, leaving the Goblins routed. This allowed the human militia to move into position near the building, to protect it.

Turn 8, the mage, attempting to protect the Army Commander, casts Hellfire on the flanking orcs, The Orc Shaman counters some of that, and casts Rally again on the Goblins, who rally! The orcs flee, demoralized from their losses.

Unfortunately, the Human Army Commander falls to injuries, although he was able to defeat two more of the Orc Cavalry, leaving the Orc Commander by himself. 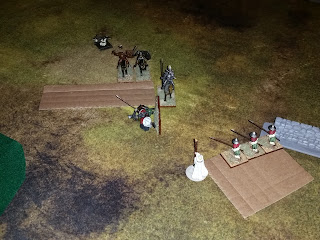 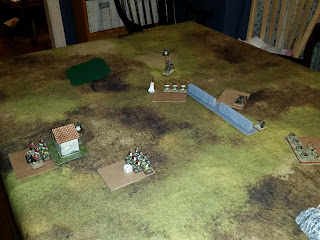 At Turn 9, with the time growing late, I called the battle. The Bestials had their Commander, Bolt Thrower, the Orc Shaman, a severely depleted Orc unit and a 50% Goblin Unit. The Humans had fortified their building with archers inside, they had their Bolt Thrower, the Mage, a severely depleted men-at-arms unit and a mostly intact militia unit. The battle was definitely in favor of the Humans at this point with only two turns left for the Orcs to take or destroy the building.


Magic was the wild card I thought it would be! The Rally spell is really useful, and Counter-spelling has some implications. There's a bit of a mini-game in deciding what spells to use, when and in what order. I may fire a cheap Hellfire to soak up some of my opponent's magic points, and then use a spell that I really want, knowing that the opponent doesn't have the magic to counter it. It was pretty interesting! And that was just with the Common spells, the Alternative List looks very interesting!

Despite the range, the Bolt Throwers (ballista) didn't do much, with a 4" move and most of the forces being in melee. That said, the Human Bolt Thrower and Archers did defeat the Troll fairly easily. It could have been just the way this battle went.

In all the war machines, I was surprised to not see a battering ram! Since one of my upcoming GaryCon and Little War games will include an assault on a city, I gin'ed up some rules on them:

Meant to knock down buildings, and not much more useful than that. We'll see how it plays out in play testing.


I've had a lot of fun learning Chaos Wars this way! I feel like I've learned a lot quickly but having to learn and then explain it to a broad audience forces me to learn a bit differently.

Chaos Wars is a fun game! It can be quick and deadly, and it has some very interesting wild swings back and forth, with morale/rally, creatures and magic users adding a lot of variables to the mix. All the pieces are there to simulate a high fantasy/high magic game or low fantasy/low-no magic game. You can stick with their universe and setting, or as I've done, use the mechanics to fit my campaign world quite easily.

Tomorrow, I'm heading to Indianapolis to play with some folks from Iron Winds/Ral Partha and their Demo Team. I've been accepted as a Chaos Wars Demo Team member, which means I get to travel to shows and conferences and play Chaos Wars wargames. Oh darn! The games tomorrow will be an opportunity for me to learn more about Chaos Wars from folks that really know the game. I'm sure I'll come back with a lot of new lessons.

What did you think of this series? Was it useful? Is there anything I didn't cover that you think I should have? Let me know in the comments!
Labels: Chaos Wars wargames