Take the skirmish underground - mass combat in the dungeon 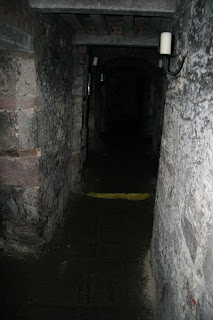 From the "I'm sure SOMEONE has done this..." Department in my head comes this question.

Take a force of men, say 60 to 80 men at Skirmish scale (10:1) versus the inhabitants of a dungeon. That's the situation I'm facing as the PCs in my campaign sold copies of their maps of the Ruined Monastery to Sir Reynald, the adventuring nobleman NPC. In his mind, it's a simple matter of rounding up a few squads of footmen mercenaries, marching into the dungeon and exterminating the Red Goblin scourge. He has the money to spend and the zeal to do something full of glory and honor to "save" Enonia. After all, his father is the Duke of the Duchy of Irecia.

The question becomes for me, as a DM, how would I adjudicate that in a dungeon setting, taking terrain and factors of being inside, monsters and wandering monsters into account?

In a quick survey of a game like Book of War, I could imagine using them. There would some limitations and situations with being underground. Of course, I have Tucker's Kobolds as a guiding principle for how the monsters could react, but as this scenario is about a group of NPC adventurers vs. monsters in my campaign world, I have to play it a bit differently.

This seems like a very interesting exercise. I could conduct this at 1:1 scale, but I wonder about tracking 60 - 80 adventurers and opposing monsters. I just wish I had some examples to tinker with, I have to think that *someone* has done this and written about it somewhere.
Labels: D&D idea wargames