This is roughly what I'm looking at doing in my "Mass Combat In the Dungeon" scenario I was talking about yesterday. My actual scenario guide is a lot more detailed, but I can't reproduce it as I don't want to have parts of Delta's Book of War given away for free. You really should think about buying this set of rules, it's a great mass combat engine for $10!

[Edited 8/19 - after more chewing and struggling with the differences in scales/time/distances to which BoW was giving me heartburn, I've made some changes listed below, italicized.]

Basic and Advanced Rules are assumed. The "enclosed space" rules from Optional Rules 6. Castles & Ships is assumed, except as noted below.

1. For combat situations where one or both sides are <10 individuals (scale is 10:1), fight on 1:1 scale. Scales revert to "standard" D&D.
2. Morale rules are in full effect for Book of War combat for units. For situations where a fight on 1:1 scale [1] results in deaths to individuals within a figure, make a morale check on the figure, per Basic Rules 5. Morale - substituting "individuals" for "figure".
3. A "diminished" figure represents a figure with casualties caused by a 1:1 combat. Diminished figures have a penalty of -1 to their attack rolls. If the figure is part of a unit, its status will need to be tracked.

4. Horse mounted/large animal mounted units most likely will not be present in the underground unless the scenario and area are large enough to permit mounted creatures. Horses typically do not go into dungeons.

5. Indirect fire is not permitted, unless the area that combat takes place in is large enough (such as a huge cavern that has the space. DM/players should discuss beforehand and come to agreement. In "normal" dungeon type corridors, this is not allowed.

6. Movement is per Book of War standard scale. If a unit wants to move carefully, checking for traps,  mapping, etc., movement rate is halved.

7. Formations - the standard formation is a single column. We are making allowances in that most dungeons are 10' wide columns, but Book of War scale is 1" = 20'.
8. Figures are assumed to have a light source. If their light source is removed, they suffer the effects of "Darkness" found in Optional Rules 2. Darkness.

9. Traps and their effects generally affect the figure closest to the trap. If the trap can only affect 1 person, then ignore the trap.
10. Creatures that are not traps, but are single entities and can affect more than 1 person (molds, oozes) or spell effects that could affect a figure, adjudicate either on a 1:1 level (and see “Diminished” [3]) or apply to a figure as a “hit” if possible. If the creature can only affect 1 person, ignore it.

I imagine that mass combat inside will look a lot like this melee... 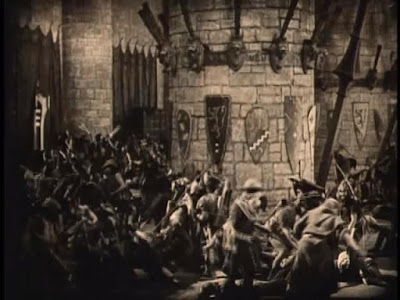 Design Notes: (Added 8/19)
The differences in scales/distance/time from Delta's Book of War and what I've learned/accepted in my D&D gave me huge headaches.

To make a translation to something that "feels" correct in terms of movement and combat within a dungeon at 10:1 scale, I've made the "BoW-turn" equal to 3 minutes - 3 1 minute D&D rounds. Delta had suggested this in notes I found on his blog and in the book.

For non-combat movement, to reflect mapping/exploring, I've cut the movement by a third, which translates to 80' in a 3 minute chunk of time. Given this is a large force moving cautiously through a smaller area, this feels correct to me. I'm not skilled enough at the math to know if this is consistent with Delta's math, but it reflects what I would expect from a large force invading a dungeon.
Labels: Book of War D&D DIY idea wargames