"Aye, bein' a part 'o Sir Reynald's troops was a fine thing. We marched past Enonia and it was a parade, banners fluttering, the men and women all looking fine in their armor, we even managed to march a straight line."

"We got to the ruined Monastery wi' the floating tower above it, and a number 'o the men were afraid, but Sir Reynald, he shouted and waved his sword at the tower and nothin' 'appened, so we were feelin' good. The goblyns were dead above, just like Reynald said, raisin' a stink wi' their rotting, but we pushed 'em aside, buried the men who fell in battle a'fore and then formed up to move on in."

"Wasn't quite what the young Reynald wanted, tho'... stumblin' out'a the dark at nightfall, cursin' the mud devil and the water monsters and men's courage that crumbled in the dark. Not that I blame those men, those dark tunnels ain't meant for civilized folk anymore. What wi' voices in the dark, and creatures that can't be kilt by blade or bow, even magical ones like the young Sir has.  He's a brave lad, but Chaos lives in those halls that drip red death on a man and monsters shamble in out 'o the dark..."

This weekend, I ran the game/simulation of one of the NPCs in my campaign taking a force of 100 men into a dungeon known as the "Ruined Monastery of St. Egyx." This has been a long contested area in my campaign. The first level is based on the article of Fight On! #1 of the same name. It is well-trodden and fully mapped by the players. It was cleaned out at one point, but with the 4 year hiatus in my campaign, I ruled that two seasons had passed and the forces of Chaos had once again retaken the first level.

When the players sold copies of their maps to the young and impetuous Sir Chaddius Reynald, he decided to "cleanse the Monastery of Corruption." Eager to prove his mettle and gain glory, Sir Reynald gathered 90 light footmen and archers, plus his personal guard, and marched on the Monastery. Having defeated a good number of Chaos-altered goblyns on the outside previously, and the PCs finishing the rest and finding the dungeon open, he was eager to march in and claim his prize.

Mechanically, I played this out mostly at a 1:1 scale for the combats on Level 1. I prepared information on the forces going within, including Sir Reynald as a 5th level Fighting Man. I blew up the map of the Ruined Monastery so I could track movement and positions. I had the monsters all prepped and a Chessix Battle Mat ready, if Reynald got to a point where 10:1/Book of War scale combat might happen and I needed to track movements in a large area.

I made a random decision table of what Reynald would do if he reached an intersection, unless there was an extremely obvious/logical decision he would make. He might choose to move onwards, to send scouts or back up. I didn't want my bias to tell the story.

Because the first level had mostly single creatures, or traps/tricks that would take effect on a 1:1 scale, I figured that it would be the element that touched the enemy (usually Sir Reynald and guards in front) that would prosecute the engagement. I kept track of single person results; if an element found itself with 50% casualties, I called that element "diminished" and it would not fight as effectively at a 10:1 scale (its combat result was reduced by 1.) 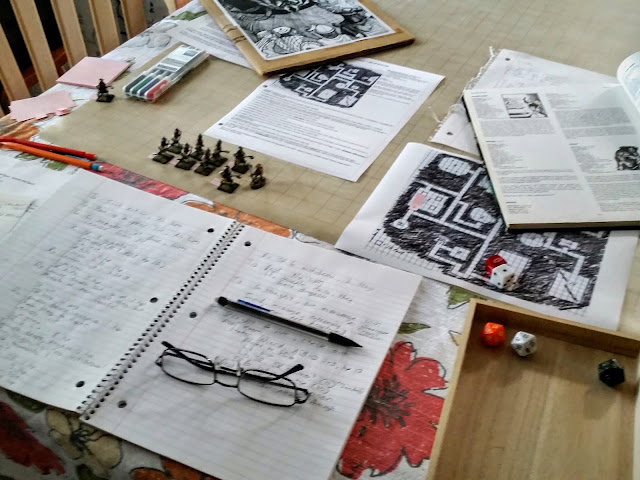 The army spent 6 hours in the dungeon. Sir Reynald left a single element to guard the hallway leading out, but they broke morale badly on the first rest/alone check and fled the dungeon. One element in particular, "Light Footmen 3", bore the brunt of "biological" hazards, losing two men to oozing Red Slime that dripped from the walls and ceilings in some locations, and losing 5 men to Yellow Mold!

Sir Reynald learned that the "snake" of men behind him in dungeon corridors was extremely unwieldy, and about halfway through the excursion, he sent half of his forces back to a known location, close to the exit (the "Pillar Room" for those familiar with the Ruined Monaster). Unfortunately for him, the "mud devil" that had been harassing his forces showed up in that room and all 50 men fled that room and the dungeon.

The "mud devil." I have a lemure in the first level, which has a specific way it can be "destroyed" if you check your Monster Manuals. The way I play it, you can beat the crap out of it to where it's a pile of mud goo, but unless attacked in that specific way, every round it reforms by regenerating 1hp/round. If the combination of attacks knocks it past 0, it takes a full round to collect itself, then reforms and continues.

The vast majority of times I had a Wandering Monster result, it was that lemure. The dice were clearly telling a story of the lemure hunting the army, and they couldn't kill it! Sir Reynald fought bravely, his enchanted sword flashing, but the mud devil kept. Getting. Back. UP! This unnerved the men greatly, and while they didn't break morale the first time this happened, they exercised a "discretion is the better part of valor" fighting withdrawal. After the second time of fighting this creature to no avail, even Sir Reynald knew that it was better to withdraw than to fight it uselessly. He would engage it to allow his men time to move away, then withdraw himself.

After the fifth time this mud devil stymied the forces, Sir Reynald withdrew from the dungeon in great frustration. Between his men becoming greatly unnerved by the lemure and then he himself almost losing his life in the Pool Room by being drowned by a strange Chaos water creature, he could see that he had to rethink his strategy. He has sent word back to the town of Enonia looking for assistance and advice on how to destroy this creature, as well as calling for adventurers to scout out deeper for his forces. Yes, obvious hook is obvious.

I really enjoyed playing out this scenario. I wish I'd gotten to 10:1 combat scale encounters, but that pales to the great story that now my players get to pick up on, should they choose to do so. Fantastic creatures were encountered, the effects of morale and the strange underground environment, with touches of Chaos, all played a hand in the scenario and now another chapter has been written. If the players don't, I'll continue to pursue Sir Reynald's expedition... and maybe give the players some "competition" to finding the secrets and riches of this dungeon!
Labels: Chronicles of Etinerra campaign dark ages campaign DIY wargames