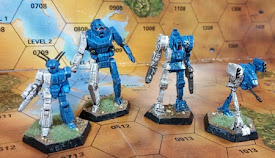 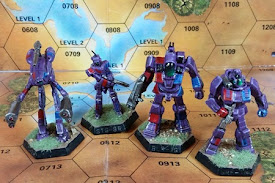 A couple of Fridays ago, my friend Chris and his son came over for what has become a slightly regular Battletech game night. The first couple of times, we played some 6 hour Lance on Lance combat and it was great fun, but like most Battletech games, it took forever!

Some friends of mine from the Chicagoland Skirmish Group have blogged about a simpler, more fast-playing alternative to Battletech called "Mech Attack" produced by Armor Grid Games. 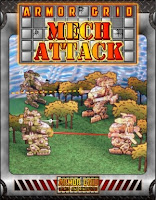 The game, written by Chuck Hughes and Matthew Kilareski, presents a simplified approach to Battletech. Less simulation, more fun, is their approach. It's a basic IGO-UGO approach - everyone rolls for initiative order - each player in initiative order activates a 'Mech, moves it, attacks. Once everyone's done their thing, you figure out heat and go to next turn. Rolls are on a d10. Modifiers are very few and more based around what the attacker did, versus the many variables of attacker/defender actions/movement/placement of Battletech. There is some terrain modifications and range modifications but they are simple and few.

Mech Attack does away with the bubbles of armor around the internal skeleton of a 'Mech in favor of an abstracted armor value that gets eaten away, then you start munching on the soft insides of the 'Mech with critical hits. You have 4 weapon points, a few heat sinks and that's about it. The rules also cover vehicles like tanks and infantry. Their forum has some proposed rules on aircraft and other things - there is apparently a beta of version 2 of the rules in development.

The really cool thing is that weapons do variable "damage patterns" to armor, so that drilling an enemy with a deep penetrating, but narrow laser, followed up by a missile hit which "spreads out" and undermines the armor can cause you heartache in a hurry! Mech Attack also has a very generous rear arc, so maneuvering for that extra bonus to hit became very important, instead of just moving to be harder to hit. Heat is dealt with right away, and you don't have to carry it over, the math is very simple and quick, but the heat effects chart can bring badness in a hurry.

The game is written to use ruler/tape measure and paper miniatures that are provided with the game, but  having almost 50 'Mechs between us, Chris and I wanted to throw-down 3025 style. So, with some help from a post on TheMiniaturesPage, I did some conversions of 3025 'Mechs to Mech Attack rules.

This is not the full 3025 catalog, but I have quite a number of them converted. More to come as I paint more 'Mechs!

We got through 2 games in less than 5 hours. That is unheard of in lance v. lance standard Battletech. Even with the conversion to 4 weapons or less, we had the feel of each 'Mech (Locusts are still annoying survivors, Hunchbacks with that damn AC/20 still punched everyone's lights, Marauders and Warhammers overheated quickly when firing both PPCs and rolling 1s/2s still is bad…) Our first battle was 4x4 Lance combat, the second was a 2x2 "Take The Hill" scenario.

We all left thinking that Mech Attack will be our standard game, with saving Battletech for those rainy days when we want to spend a full 6 to 8 hours rolling the "Box of Death" d6s for missile hits.