Campaign: The Great Desert is home to strange races, mysterious sects and lost treasures that call to the foolish and courageous alike with the promise of glory and adventure. The necro-mages who worship the Chaos Gods are a constant threat to the fragile peace among the desert's inhabitants. Mysterious ruins dot the lands, with deep catacombs that hold horrible, forgotten creatures and rich treasures for any who are fortunate enough to survive to find them!

Homebase (Hex 0) (0000): Chaliam - The great desert city of Chaliam beckons to all with its daily market and gladiator spectacles among its vast ancient buildings. It is lightly inhabited, with most of the city in ruins; the humans and halflings live in an uneasy truce with the sand lakesh (lizardfolk) and yeshtebra - half snake/half humanoids. The nobles of the humans scheme to become the High Sultan, with byzantine plots to undermine and discredit their adversaries. 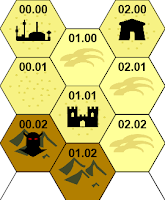 Location 1 (0101): Sovenjar - The great Temple is home to the fierce Lawful paladins who allow only the most pious and martial of women into their ranks. They challenge any men who come to their temple to a joust, holding the losers hostages until they are ransomed or serve a period of time in service to the order. A son of a noble of Chaliam is now a prisoner, after having attempted to woo one of the paladins; the noble is seeking adventurers with the promise of rich rewards if they will go to rescue the lost suitor.

Location 2 (0002): Aeri of the Lovfrenia - The giant bird people are battling to protect their decennial clutch of eggs! The normally skittish goblins, who are known as the desert merchants, are stealing them as a new delicacy to sell to the lakesh and yeshtebra! The Lovfrenia have offered a map of a great treasure deep in the desert to any mercenaries who will help them in their struggle.

Location 3 (0200): The Camp of the One - A horde of the Ashumnumnummu (aka Numus, the Flower People) are on the move! They are following a single Numu who bears a sacred glowing gem and is believed to The One; a figure of prophecy that will lead the Numus to greatness. Chaos mages want the gem to twist the Numus to their will, leading the Numus to acts of kidnapping desert travelers to conscript help!