Campaign: Humans, Orcs, Elves, Centaurs, Goblins, Dwarfs, Fairies and Dragons. All fantasy races, living in the United States in the 1920's, with the Prohibition in full swing, as is the bloody gang wars over territory and business. This volatile mix is even more complicated by the presence of wild magic and strange happenings from Kane Forest and Lake Michigan itself.

Homebase (Hex 0) (0101): Lakefront City - Lakefront City is a growing major metropolitan area, embroiled in a bloody gang war and on the edge as ambition clashes with ancient grudges. The elves who live in the central downtown area hold sway and the top official positions, while the humans who run the city government live in the encircling neighborhoods go about their lives amid the chaos, many paid off by competing interests. Human gangs involved in liquor, gambling and drags are fighting each other as well as dealing with the the encroachment of the orcs and dwarfs. 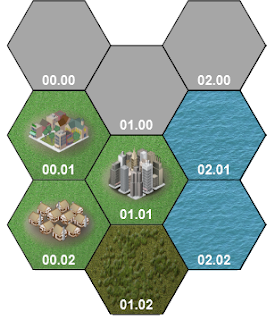 Location 1 (0001): Rocklake - The metals that underlie the business and industry of the region come from the Dwarfs of Rocklake who mine deep under the earth. The Dwarf mayor Kandice runs the town with a tight grip, while her husband Thomas is the leader of the Green Iron Fists, the dwarf gang running dwarven ale into Lakefront City. Both are extremely rich and jealous of the Elves of Lakefront City, seeking always to elevate the dwarfs at the elves' expense.

Location 2 (0002): South Village (Orctown) - The orc immigrants of the late 1800s/early 1900s have concentrated in the small town of South Village, just as much for safety as for comfort. The great orc Melik is both mayor and leader of largest orc gang "Drim" (Stones), involved in gambling, illegal liquor and drugs. They are looking for ways to get more territory in Lakefront City, while at the same time at war with the Dwarfs in Rocklake and seeking to understand the attacks by the strange goblins from Kane Forest.


Location 3 (0102): Kane Forest - The verdant trees of Kane Forest are ancient and have been left wild due to the presence of wild magic, huge nests of fairies and possibly worse! Goblins have been sighted there, making raids into orc and human territory. The elves are reluctant to allow the police to hit back, for fear that rumors of a sleeping ancient dragon in the forest might be true!

A nod to the Netflix movie Bright (I loved it), the Beastie Boyyyyyyyyz!, Full Devil Jacket, and to Google+, where someone mentioned Gangbusters, the graphic on the post looked like an orc cop bashing a human and KA-CHING, inspiration hits.

Sorry for the long pause in Three Hexes. I ran dry, minis needed painted, games needed to be ran, etc. But I'm feeling the stirrings of inspiration again, so let's see how it goes. Can't guarantee a weekly deal, but we'll see. Enjoy!
"Three Hexes" are simple campaign starters to show that you don't need to do a lot to have interesting settings for people to play in. Feel free to use these in your game, campaign or as ways to spur on your own creativity and imagination!