Campaign: Skyscrapers, hybrid cars, semi-automatic weapons, cell phones, tablets, airplanes, SpaceX reusable rockets -- and githzerai, orcs, goblins, githyanki, humans, elves, dwarfs, halflings, slaadi -- all and more are found on this world of space, aliens, travelers from other planes of existence, magic and technology, all centered on the American city of Chicago. Whether you work as a wageslave for a corp, as a GDI (Gods-Damned Independent) or a cult; you're trying to scrape together dollars, renminbi or gold coins to get by, or at least to get the latest iPhone with counterspelling apps built in. In this world, it's risk your life and limb on a new part of the Underworld that's popped into existence beneath the subway tunnels, follow your corp-boss's orders to enter a portal over Lake Michigan to a strange planar destination or just survive with dealing with the latest flash-slaadi-mob who are raising hell for lulz in Grant Park.

Homebase (Hex 0) (0101): Chicago - The Windy City was complicated and cosmopolitan in it's unique Midwestern way before The Event, when dozens of rocky shafts erupted from Lake Michigan, announcing the arrivals of the Portals, disgorging dozens of strange, alien beings. With typical "Chicagoan" attitude, the population shrugged and did what it does best - try to make a buck off the new tourists and business opportunities. Today, Chicago hosts the many dozens of species and races with new challenges in housing, policing, sanitation and governing, but the opportunities are nearly limitless for many who are drawn here. 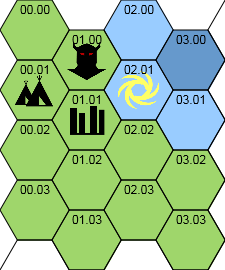 Location 1 (0001): Ho-chunk Nation - The Event was accompanied by the History Shift, where time and space rippled and caused things to change, such as the Ho-chunk Nation having successfully seceded and created their own area to the northwest of Chicago. Today, the lands are filled with traditional and modern dwellings and the money being made on Ho-chunk-tech is nearly as much as is being made on magical and spiritual ventures. They guard their borders zealously, allowing in only the rich, the powerful and the lucky person with something that the Ho-chunk want or need.

Location 2 (0100): Orcanosha - The Event also brought the Racial Changes, where many humans "shifted" to become other races straight from fiction: dwarfs, elves, goblins and the fearsome orcs. The area of southwest Wisconsin was a place where the vast majority of the population changed into orcs and they also found a culture existed in their changed minds. Orcanosha, formerly Kenosha, is the center for the Orc Tribe of Wisconsin and is constantly at battle with racists who want to make the Orcs leave, usually being ejected themselves by a united and determined defense.

Location 3 (0201): The Portals - Huge columns of rock jut out of the waters of Lake Michigan, topped by glowing areas which serve as portals to other dimensions and planes of the existence. These serve as two way gates, much to the chagrin of the US and Canadian governments who have not been successful in limiting access or closing the portals. The portals are under constant surveillance, but with the unknown forces that seem to ripple around them, it is easy for newcomers to slip into our world unseen, and for the determined individual to get to the portals which lead to opportunity... or doom!


Inspired by Shadowrun, a crazy RPG-story-seed from Twitter and my own "Modern Original D&D" game I played online at the OD&DBoard forum, I've mashed all that together to come up with this campaign idea. I'm so psyched about this one, I'm tempted to run it myself!
Every week, I will be posting "Three Hexes" - simple campaign starters to show that you don't need to do a lot to have interesting settings for people to play in. Feel free to use these in your game, campaign or as ways to spur on your own creativity and imagination!