Campaign: The peaceful tranquility of the countryside has been interrupted by the activities of the most vile fiend of them all - adventurers! Drawn to the depths and potential riches of the nearby Grottoes of Lawlessness, adventurers plunder the creatures within, and then come to town and farmsteads, demanding services, drink, food and worse! The inhabitants of this area have just about had enough and there is a tension in the air that would take only one wrong incident to turn into mob terror!

Homebase (Hex 0) (0101): Townsville - The village of Townsville is a peaceful and happy place, its inhabitants are always welcoming with open arms, a cold mug of home-brewed beer or a piece of hot stew pie. Lately, those poor folk have endured an increasing number of boisterous, mean-spirited and cruel visitors - adventurers! Whether brawling in the local tavern, harassing the shopkeep of the local General Store with orders of increasing difficulty, or causing a ruckus at the local cemetery with imagined undead, the villagers are about fed up and ready to ask the adventurers to leave for good! 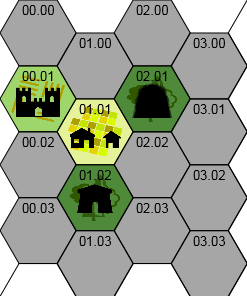 Location 1 (0001): Gamdesic - The regional Sheriff calls old castle Gamdesic his home and keeps watch over the lands from it's crumbling walls. His constables have gathered around the castle with urgent demands for raising a local militia to run out the rampaging adventurers from the area! The Sheriff knows that it is only time before those same adventurers come looking at his castle as a potential new base of operations and he's determined to not let that happen!

Location 2 (0102): The Camp - This hidden hollow has always had a reputation for being a den of thieves or a secret hideout of assassins with bloody hands, but now it has become the headquarters and base for the bad adventurers. A nearby stream serves as a water source and the home of a very annoyed nymph/dryad couple, and the surrounding forest is filled with irritated fey folk and woodland creatures who've become target practice for these cursed humans! The camp itself has all the comforts that adventurers could ask for, except for walls, solid roof, comfy beds, readily available drink and food and other comforts. (But, then, that is what those nearby towns and castles are for, right?!)

Location 3 (0201): Grottoes of Lawlessness - A large network of caves, nestled in a forested valley, serves as home to various beasts, creatures and mythological monsters. One time at relative equilibrium with each other and the surrounding civilization, the intrusion of rapacious adventurers has upset that balance! Now the creatures are organizing against the raiding parties, calling in relatives from far away and even beginning to raid the nearby farms and villages in return for wealth, equipment and to cause reciprocal terror!


This week's Three Hexes is a bit of a lark, taken from a suggestion of a reader as well as inspired by the mini-miniatures-game "When Good Villagers Go Bad!", which I played at last year's GameHoleCon and other influences which should be very apparent! Maybe you'll run this campaign tongue-in-cheek and let the players play the part of the rampaging adventurers! Maybe you'll run this straight and pit your PCs against a competing band of adventurers who happen to be dastardly, but 2 levels higher than your players. Have fun!
Every week, I will be posting "Three Hexes" - simple campaign starters to show that you don't need to do a lot to have interesting settings for people to play in. Feel free to use these in your game, campaign or as ways to spur on your own creativity and imagination!