Campaign: Years ago, hidden shores were discovered in a fog bank that suddenly blew up across the eastern seas. As sailors and explorers sailed into the veil, they discovered a large, moor-covered island with a singular feature on it, a large, unpenetrable basilica made of iron, it's single massive door and windows mocking all attempts to enter. A town sprang up around the edifice and many explorers are combing the island, eager to see what other secrets they may find; not knowing that the most deadly and evil of secrets is awakening right beneath their feet within the Metal Church!

Homebase (Hex 0) (0100): Niltinic - Niltinic lies on the coast near the initial landing, and where the Grayeen River slowly spills out into the ocean, having grown around the enigmatic Iron Basilica that sits on a mound of rock. The town supports both the scholars and mages that study the strange edifice and explorers/adventurers who travel into the foggy forests and marshes of this strange land. There is  a enervating air among the wooden buildings crowded next to each other leading to many public duels or suicides, and Sheriff Brillic's despairs of having enough help to keep the general lawlessness from overrunning the understaffed guard. 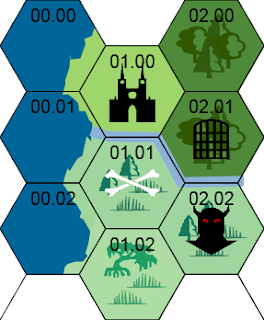 Location 1 (0101): Moor of the Dead - Whoever was here prior to the island being discovered, it is likely that it is their dead that live beneath the marshy grasses of the moor. Travelers tell tales of dozens of walking skeletons erupting from the muck, grasping at victims to drag them under. Clerics have set up "walking shrines" by the river to keep the undead at bay, but the numbers of such are increasing and making this area extremely dangerous to enter.

Location 2 (0201): The Nameless Pit - The explorer's skeleton who found the nameless pit is still wedged in the metal grate that covers the entrance to a winding series of tunnels that lead far beneath the ground. Dungeon delvers have found strange chambers with odd artifacts and strange, dangerous creatures of legend! What hasn't been found is that the tunnels lead to an underground temple beneath the Iron Basilica, which holds an ancient evil that is stirring to life!

Location 3 (0202): Troglands - No one knows if the Trogs are mutated humans or something else, but explorers to this part of the moors report tribes of the fierce beings, primitive cannibals/carnivores who attack without mercy and show very little interest in commerce. Those who come back having either raided the tribes or miraculously made peaceful contact bring statues of gold and jewelry of strange made and high value. What they haven't yet seen are the iron statues of a grotesque being in each of the tribes' centers, nor the rituals that the trogs are performing at night, complete with sacrifices of kidnapped adventurers!