Campaign:  For 200 years, the Arcanocrats have ruled the lands with an iron fist, their constructs keeping watch and dispensing harsh justice over the conquered. The free lands are wild wastes, full of strange beasts, magical creatures and the remnants of what used to be. This is where the rebellion begins, here in the shadow of the utopia that benefits only the rulers at the expense of the ruled.

Homebase (Hex 0) (0002):  Roughlands: This rag-tag collection of tents, lean-tos and holes dug into the hard rocky dirt is a small base for the Rebellion, one that moves regularly as the Arcanocrats' forces are always lurking the scree. Services and supplies are available, but at a high price, as the black market is the only reliable way to get equipment. Recently, one team has brought back a treasure-trove of armor and weapons from a raid on the Keep to the north in the mountains, however, the rebels are about to move in anticipation of a heavy Arcanocrat response. 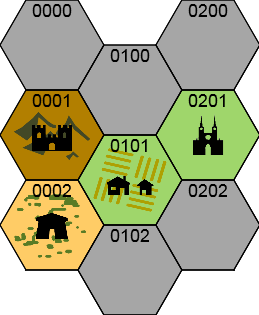 Location 1 (0001):  Montagard Keep is a relatively small outpost, mainly to ensure that the creatures of the mountains stay put and that the rebels who live in the Rough Lands are kept in check, if not eliminated. The Keep's contingent consists mainly of smaller constructs with lower level mages to control them and interact with the few villages nearby. The myriad of natural tunnels underneath the keep allow the rebels to make raids on the keep; in response, the mages have lured several horrible creatures of the mountains to take up residence in the tunnels as guardians.

Location 2 (0101): Linsdon Dale is a verdant farming region, made of small towns and hamlets whose grain and animals go to Convexion's workers. The roads and crossings are guarded by constructs and bored fighter-mages who torment the inhabitants they come across for their amusement. The inhabitants of Linsdon are young children, older adults, the infirm, or those who were deemed unsuitable to work at the great factories of Convexion, though they are slowly growing angry at the 'crats and siding with the Rebels.

Location 3 (0201): Convexion - the regional capital of the Arcanocrats is shrouded in dark smoke and the stench of industry, surrounded by drab concrete buildings which house the teens and adults who have been pressed into service at the factories. The hum of the strange machines which produce the many technologies that keep the mages in power fills the city and drowns out all but the loudest of noises. Huge constructs guard the streets and surround the opulent dwellings of the rulers and their families, as well as the vast libraries and mysterious laboratories where no common person returns from when summoned to it.


My usual sandbox is one where there's not a huge hook implied in the setting itself, rather it's through situations and the NPCs. In this campaign, while it can be done as a sandbox, it also lends itself to one huge hook/main quest - rebellion against a superior authority. Enjoy!
Every week, I will be posting "Three Hexes" - simple campaign starters to show that you don't need to do a lot to have interesting settings for people to play in. Feel free to use these in your game, campaign or as ways to spur on your own creativity and imagination!