Campaign: Everyone knows that for each region (gateland) roughly a day's travel wide, there are 6 passes, exits, waypoints, gates that lead to other gatelands, though none know how or why this came to be. These lands can be full of riches and opportunities, mysteries and adventures, death and hardship, but they are all different from each other in different ways, save for also having six gates. The connections between gatelands change at the whim of some unknown god or force, which means that each change may bring fortune or new enemies seeking to take what you have.

Homebase (Hex 0) (0101):  The region known as the Kingdom of Enedwa is made up relatively peaceful farming lands and the great city of Enedwa, ruled by the Council of Merchants. These same merchants regularly profit from trade with other gatelands, although the farmholds closest to the gates are used to incursions from less-friendly neighboring regions, such as the Burning Lands and Deadlands. The six passes that lead in and out of Enedwa are zealously guarded by the Companions - the strongest, most capable warriors and mages of the Kingdom. 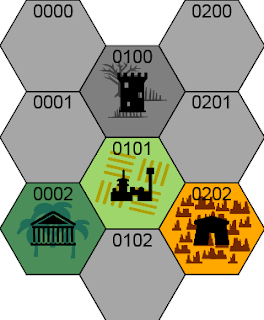 Location 1 (0002): The Hotlands - A hot, humid jungle full of riotous vegetation, dangerous rivers, hidden villages of hostile humans and lost cities lying abandoned. The center of power is an enigmatic shrine to an Elder Demon, populated by the fierce lizard people who supply the warriors and shamans for the shrine. The lizard tribe has been raiding the Kingdom of Enedwa for sacrifices to the demon, favoring older women and twin children in their kidnappings.

Location 2 (0100): Deadlands - A dark, bitterly cold, silent land that seems to draw the life energy from any who enter through the gates to this place. Those who die here (or, perhaps, spend too much time here) become one of the living undead, joining the others that are drawn to the impossibly tall, golden tower in the center of the clutching dead woods. There is little of value here to most, save the necromancers who find their powers increased, compared to the time they spend in this treacherous land.

Location 3 (0202): Burning lands - The searing sun scorches the sand the surrounds the lava fountains that spout molten rock at random. The stone giants war with the rock orcs and goblins who scrape out an existence in this unforgiving region. Any who brave the steep cliffs or tall dunes to find valuable gems are at risk of being killed for their water and resources.

What if hexes really existed? What would happen if a wilderness exploration took you to a completely different place, only a day's ride away, and those same destinations could change at the whim of a dice roll, DM fiat or some other interval? I remember how much fun it was to use the "moon gates" of the Ultima 3 CRPG to go to places that were inaccessible via just walking there. I've wondered what a "hex" world would really look like. What would a campaign of such places be like? Here's my starting point for that.