[Three Hexes] The Kingom of Smazah

Campaign:  The Kingdom of Smazah is a small Kingdom, one not worthy of much notice. The recent crash of a strange vessel and the Strangers within has caused great excitement across the five and twenty countries of the Land. Lions Gate has become the center of interest as mages, adventurers and greedy opportunists seek to plunder the ship of its strange valuables and powerful artifacts.

Homebase (Hex 0) (0100):  Lions Gate was a peaceful trader's town in the rural center of the Kingdom. The crashed ship has shattered that peace. with the arrival of many tent shops, snake-oil salesmen wagons, gregarious adventurers and wandering vagabonds out to score it rich quick. 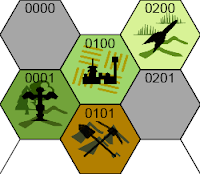 Location 1 (0001):  Goblintown - The crazy goblins make their home in the trees, their patch-work houses connected to each other by patchwork ropes and bridges. Each tree is a different goblin family, although they have recently become more organized under War Chief Grit, who has sworn revenge on their hated enemies, the dwarfs from Mounkiln. The goblins are just as likely to trade their charms and potions as they are to try and rob you for your gold and scalps.

Location 2 (0101): Mounkiln is home to the Dwarfs who have mastered the magic of steam engines and mining. The greedy dwarfs sell their technology and wares for exorbitant prices but their equipment is the best in the Kingdom. Their current preoccupation of raiding the wrecked ship (0200) for new devices to study and copy has distracted them from their normal antagonism towards Goblintown.

Location 3 (0200): An alien cylindrical "skyship" crashed several weeks ago in the hills near Lions Gate, prompting a "gold rush" by humans and dwarfs to 'recover artifacts' (aka, loot). However, the Strangers who man the ship - robots and aliens - are busy trying to protect their large vessel while looking for resources to repair and leave. Due to the impact, this giant ship has many places to enter and many strange machines, devices and tools to plunder - at great risk!