[Three Hexes] The Edge of the World

Campaign: It has long been known that the world is a flat disc, with miles-high Border Mountains and Hil-grim towers serving as silent guardians to whatever lies beyond the edge. Researchers maintain that there is something beyond the brink, either underneath or directly below the dark firmament with the shining points of light, home to the Lightbringer and Darklantern orbs. They maintain that the mysterious stairs leading from the deep World-edge trenches to the Hil-grim towers once saw the Ancients coming and going from the Lands.

Homebase (Hex 0) (0002):  Reynald's Fastness - an ancient fortress of crumbling stone and rusting metal, home to the 404th Guardians Regiment who maintain patrols along the border mountains and towers. Only the curious, mad or adventurous come to this ill-kept outpost, with bars and houses of pleasure outnumbering armories and supply warehouses. The Great Watchman, leader of the 404th, has slowly sunk into madness from whispers in his dreams that he repeats in breathless screams. 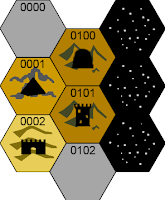 Location 1 (0001):  A pyramid of black stone rises above the rocky scree, it's great golden doors opening only when when the Darklantern orb covers the Lightbringer and then when the Darklantern orb turns a dark red. Expeditions to gain knowledge or loot treasure have entered many times, with the vast majority lost to the enigmatic structure. The last expedition to enter had only one survivor return - a shell of a warrior who could only stare or mutter strange curses, but bearing items of powerful magic and of immense value.

Location 2 (0100): The deep, dark tunnels of the "mazes of the edge" run beneath the miles-high border mountains of the Edge. They sometimes lead to clusters of lost chambers full of strange Ancients artifacts, but more than not, the black passages lead to death from strange creatures. The Guardians sometimes send their new recruits on survival training exercises to live for thirty days in these tunnels, with only a knife, a blanket and some food.

Location 3 (0101): The enigmatic Hil-grim towers, made of smooth green/grey stone, can only be entered by walking down the stairs of the deep World-edge trenches that lead into the under-levels. Each tower is different; this tower harbors silent, moving statues and puzzles that ensnare researchers looking for clues as to what lies beyond. It is whispered that the statues will make bargains that promise great wealth, but come at the risk of losing one's mind and soul.