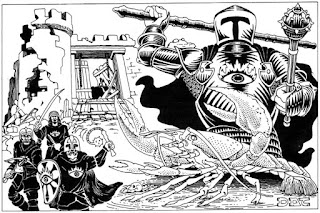 In preparation for my first real foray into Greyhawk at GaryCon 2020, I've been reading the T1 "Village of Hommlet" module, as well as researching rules! My intent is to create an OD&D/Chainmail experience.

To that end, I've finished both the rules for combat and determined who will be present in the first Act of the game, as the Hommlet militia marches upon the Moathouse to deal with rumors of evil lurking.

My approach will be that all non-combat (melee, missile, movement, morale) related situations will be adjudicated using OD&D (1974 only) as the foundation. I think this will mainly relate to magic and general activities. There is some exploring that can happen during/after Act 1, depending on time and how things go. I'm wondering if time may run out before we can get to Act 2, the Temple's denizens marching in force on Hommlet!

The biggest features/differences of my approach to using Chainmail for combat resolution are:
Here is a link to the rules as they stand right now. Note - this is to the actual Google Doc and you might/will see changes! You're very welcome to copy and fold/spindle/mutilate for your own game!

I will be play-testing these rules over the Christmas holidays with my friends from the NIFMA (Northern Illinois Fantasy Miniatures Association) - Art and Chris. Possibly Derek as well!

For the order of battle, I've gone back through and brought my initial list in line with the combat rules from above and cross referencing against the T1 module to get their stats correct. Right now, this is how it looks:

I have to tell you, I think the Hommlet forces are going to have a hard go of it. Not only with the ogre and lizard. Those four ghouls are going to cause some havoc unless Calmert can turn a few of them, which I will allow in accordance with OD&D rules! That's why I'll play-test, to see how this turns out!

Why am I excluding Terjon, Burne and Jaroo? From reading their descriptions in the module, I got the sense that they would not necessarily be all that interested in this jaunt. I am leaving them in the back of my head just in case they are needed to balance out things for the forces of Weal.

So what do you think?
Labels: Book of War Chainmail GaryCon OD&D Rescue of Hommlet