Sixty Opinions That Nobody Should Care About

So it started with a Tweet... I think a lot of Internet stories start like that... but this one started with a fashion tweet that led me to an idea of tweeting 100 opinions on a topic. So... I tried... 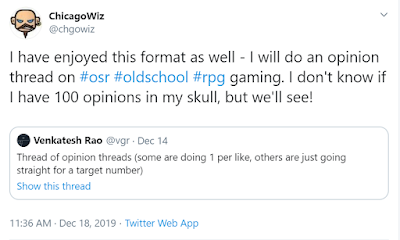 Didn't quite make it, and I didn't start any flamewars, so I guess my opinions are either safe or just not controversial enough! Ha! Anyway, for your amusement and/or edification, here's about 60 or so opinions I have about the #osr scene...

The OSR #rpg movement is like punk rock, it's undefinable although there is a lot about that can be defined. At the end of the day, playing games the way they were played in 70s/80s is about what calls the person to play it that way.

There are bad actors in the #osr, and there are some really frakkin' awesome cool people who just want to put butts in chairs to play games.

The #osr had a huge impact on 5th edition of Dungeons & Dragons, and I think that explains, in part, 5e's popularity. 5e takes the game back to being a social game, not a numbers/grid game.

The #osr, back in the 2000s, started off about getting more content, but it was DIY. It became a publisher's game. It's now swung back, IMO, to being DIY, who publish like rabbits. Embarrassment of riches.

The best thing about #osr is about teaching folks to look at rules as toolkits, and settings as the destination.

I asked about ten years ago where our (the #osr's) Empire of Petal Throne/Blackmoor is. The weird. The odd. The stuff that breaks the mold. Ten years later, we have it in spades, but it will always touch on common themes that come from our deepest mythologies

Tables are great, but giving someone the examples and workflow of how to use those tables and mold a great game is the way I think we give life to the #osr punk sound.

The #osr blogs of the 2000s are now the #osr DTRPG 'zines, the podcasts, the YouTube channels and the Discord, just to mention a few channels. There is a lot of content to sort through, but I see the common themes that were in those old blogs.

We have enough retroclones and rewrites of B/X. We need more settings and more games that take B/X (or other D&D rules) and tune them to the setting. In a way, more Empire of Petal Thrones-esque clones. (that's 10... 90 more to go!)

Being a referee in an #osr game isn't about a god-like trip, but a setting and expectation of roles. Whether like a sports ref, or a storyteller ref, or something in between, the referee is part of the process and an important one.

Beginning #osr refs should know it's OK and important to seek out feedback and cooperation in games. It's also important to draw the boundaries and set the expectations. This feels scary at first. It's a huge key to the success of a game.

The age-old debate on "setting" vs. "rules" is chicken/egg. You need both. It's a personal taste as to which to spend more time on. It will influence how you DM, be aware of your preference!

I think too many in the #osr think they have to publish to matter. This concept of "I must be a celebrity to matter/contribute" is pervasive. It's hard to DIY without some ya-ya being fed. Finding your motivations and feeding them will keep you active.

The oldtimers in the #osr are going to struggle with how fast culture and opinions change - this is more about age than about the scene itself. It still has to be addressed and talked about.

Running a ten year #osr campaign was less about the rules/setting and more about keeping the relationships with people alive - and allowing for growth and change. So too, the hobby.

#20 - I'm not sure I have 100 opinions on the #osr. I know that there are a lot of great voices that I listen to across the world who are a lot smarter than I am, and I hope they continue to share. That's what makes this hobby grow.

The creators of the OG #osr games aren't meant to be followed religiously or blindly. That defeats the purpose of what they originally created.

"Make it your own" is the ONLY rule to follow to. the. letter. That also stands true for the creators of today.

Gygax, Areneson, Barker, et al, all broke their own rules and changed things on the fly. They wanted to play games, not invoke dogmatism. #osr

That being said, there's things to be learned from by-the-book play. Do it. Then make it your own. If your own is the book, awesome. #osr But it's been written once already... I want to read YOUR creation.

I also think that the OG creators were a little bit crazy. Awesome crazy. It helps to tap into that bit of creative insanity to come up with worlds and games. #osr

I'm glad we have 40 years to learn and grow from. I may like the game, but I do NOT like the OG layout and scattershot. I'm looking at you Chainmail, OD&D, AD&D, EPT etc.

I forgive and understand because you were first. I love the OG for the foundation. I love the #osr retroclones for clarifying and giving me basis for going back to OG and seeing it for what it is.

I would have loved to be a fly on the wall for those first AD&D design meetings. Trying to codify D&D for the first time must've been a trip. #osr #history

I would have also liked to been a fly on wall when MAR Barker was inventing those languages. Now there's a random generator that we need - invent-a-language by rolling a few d100s.

I think that the documentaries that are getting oral histories from the folks that were OG are critical, so that we know the "why" #osr themes exist and how they came to be.

People from the #osr that I salute... No particular order, Matt Finch for Swords and Wizardry, Old School Primer

The authors of OSRIC for clarifying AD&D 1e #OSR

Mark Allen and Peter Mullen for their art. #OSR

Michael Curtis as a fellow Three Header and for following your dream.

David Bowman who had an awesome blog and with me, invented the One Page Dungeon

Alexis of Tao of D&D for inspiration and then for why your way isn't my way.

Now for unpopular opinions (although given the silence on my previous 30, they must all be unpopular!)

We have enough clones and retreads of the originals. The hacks are great, but settings/rules-to-fit-settings are where I think we can truly define the #osr

The #osr does have an issue in that there are older generation folks who are not going to change/progress to the world of today. That doesn't excuse bad behavior. BUT, that doesn't mean they should be written off. Forgiveness/understanding is divine #Buddhism

Settings should be stolen from and adapted/changed, not used as-is. I'm looking at you, Greyhawk, Forgotten Realms, Tekumel, Arduin, Third Imperium, etc. #osr

Minis are absolutely a part of the game - the visual 3d thing that allows players to "be there." #osr #minis

I have no intentions of ever playing LotFP. Not a fan of game or publisher. #osr Same for ACKs. Now looking to see how many followers I lose...

Bryce Lynch of tenfootpole.org says it way better than I do. Make stuff useful at table. Put detailed history fluff in back or separate/alternative book OR novel. Or a written oral history. I'll provide my own fluff, based on your foundation. Let ME imagine!

Gygax, Arneson, Barker, et al put on their pants one leg at a time. They made mistakes. They're not the be all - end all. Don't worship at their altars.

Gygax, Arneson, Barker, et all were fucking awesome for being the first. Respect. I hope to have that much original imagination or ability to adapt tropes as well.

It doesn't matter how bad what you wrote is. Keep trying. I'm an idiot and I keep writing/podcasting/painting minis. I get better, gradually, always trying to learn. Don't listen to those demons on your shoulder. Beat the fuck out of them with your enthusiasm.

It is actually really hard to write good, original RPG content. Respect to those who set out to do what they do listening to their own drummer. Many will try, few will succeed. Learn from those that do well, if that's your goal.

The #osr needs to highlight and support/promote more women and minority authors/content. I know, duh... but I wish I knew who was out there TO support from that realm.

I've had same-sex NPCs in relationships from day 1, all genders in positions of power/military and making world-changing decisions. Proud that my players have never objected. I don't focus on it, but build it in to the foundation. Making the world what I want to see.

My games aren't about politics, but I am sensitive enough to know that people bring politics/beliefs to the table. I want them to be themselves or what they want to explore. No judgements, no restrictions. Only way to do that is to show it. It starts with the world.

The #osr needs more of that, IMO.

(and it might be out there. I don't buy many settings or books. I'm your worst audience because I want to make all of my own stuff, not buy yours. Sorry. Not sorry. Just how I am. If it is out there, and it's #osr, point me to it, pls?)

I also don't buy the rules or hacks. I have my own game based on the old rules and modified by free clones/stuff I read on the blogs, hear in podcasts. Again, I'm your worst audience. I'm not alone #osr

'Zines are the way to get someone like me to buy stuff. Give me tools. #osr

Someone smarter than me should create rules/expansions to the Dungeon board game that would allow for multiple playthrus with same character going on new quests. I'd buy that. #osr

Maybe instead of making snarky books to make passive aggressive statements, Jim could support/highlight talent/authors from marginalized communities. That would be far more productive. #osr #grindingaxe

Then again, I'd like to see active pursuit by all #osr publishers in that regards. Or maybe I'm an idiot, they already do that and I'm just not seeing it. Is that true?